If you wanted to know the latest society news in Victoria prior to World War I, there was a magazine available for you to read. A copy is available at the BC Archives.

The advertising reflects the interests of the readers of the day, especially for those requiring the latest forms of transportation. 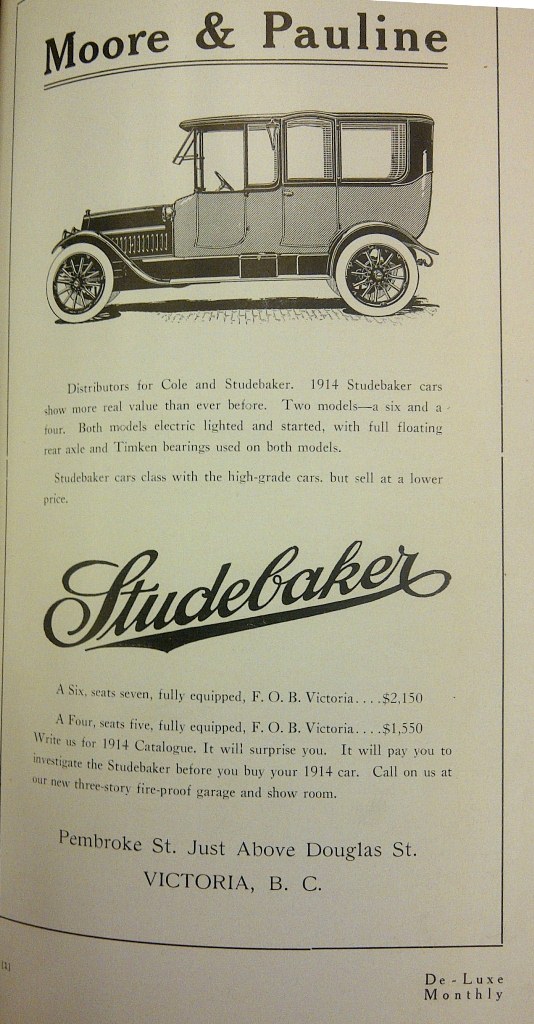 Moore and Pauline were distributers of the latest models of Studebaker automobiles.

There are several interesting things to notice about this advertisement.

The directions to the establishment say “Pembroke Street just above Douglas Street”.
This is not how present day directions would be usually given.

The way the directions are described in this advertisement seem to be focused on the Victoria Waterfront where the prospective client would leave Pembroke Street near the water (Rock Bay) and walk up the street until they were “above” Douglas Street.

This probably reflects the greater importance the waterfront had to Victoria before it expanded out beyond the harbour.

The advertisement also lists a new three-story fire-proof garage and show room. There were several of these throughout town. For example, 865 Yates Street used to house Begg Motors, a Chrysler, Plymouth and Fargo dealership.

Whatever happened to this building. Does it still exist?

One way to locate a possible address is to find an on-line city directory. The ad already mentions a street and cross street.

Here is an image from the city directory of the day which gives the address as 742 Pembroke Street. 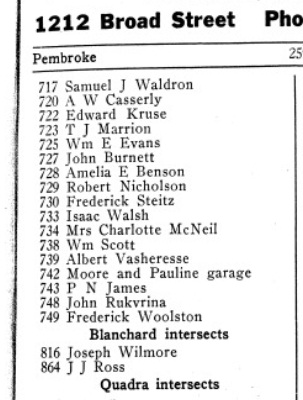 Once the address is located, another source to investigate would be the Fire Insurance maps of the day.

The 1911 maps are the ones closest in time to the advertisement. Sheet 16 shows the lot with a note that excavations are in progress “to be a garage”. The lot is shown to be on the north side of Pembroke Street, extending through to Princess Street. Several buildings are between the excavation and Blanshard Street. 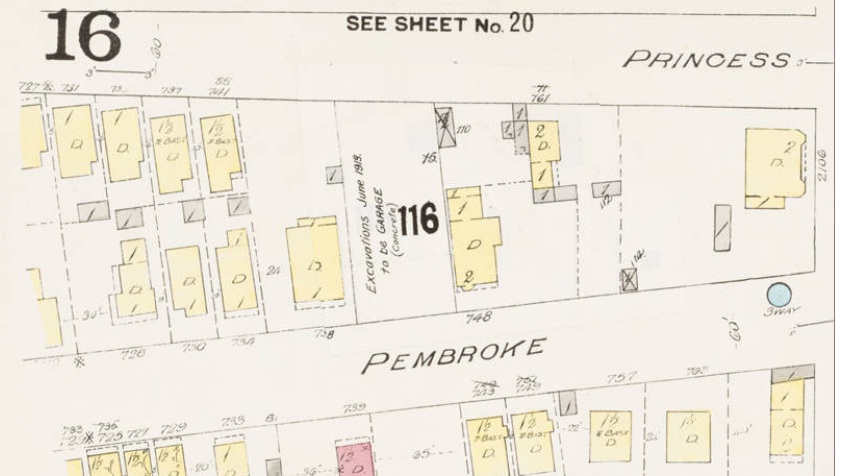 Modern resources are available to investigate this property as well.

The city of Victoria, like other cities, have online address maps to show you exactly where a property is located.

To locate the address, enter 742 Pembroke in the search field, and click on “Zoom to feature”, after highlighting the correct address.

The property is now identified as being on the northwest corner of Pembroke and Blanshard Streets. 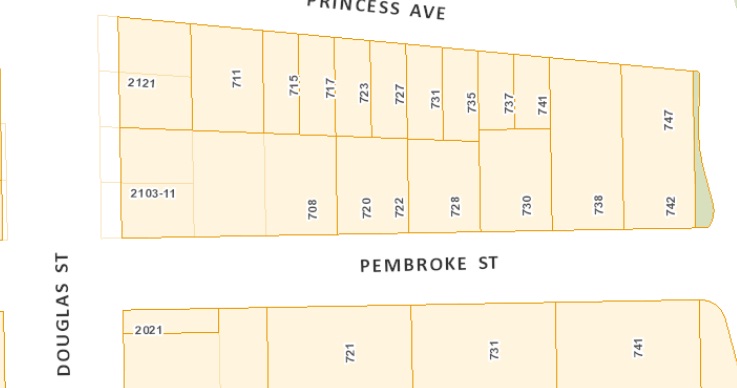 Whatever happened to the rest of Pembroke Street?

To answer that question, an arial view would be helpful. http://goo.gl/maps/LKgYQ shows how Blanshard Street now bends westward while the original Blanshard Street has now been renamed Dowler Place. This is very typical of city planning as roadways are realigned to make vehicle traffic flow more easily.

If you can locate photographs of the Moore and Pauline dealership, especially of the Pembroke Street entrance, I would be most grateful. If the picture is posted to an online photosharing service, I’ll be happy to post the link!