the 6th of 32 views- Curating Ethnology

This week I informed the kids that for 32 views we turn our attention to art.  And then I said, well what is art.  Kids looked around the room and pointed out things that they thought were artworks.  A photograph of a fossil shell, a painting of a landscape, a birch bark canoe hanging from the ceiling.  So I asked one kid, what makes something art.  He said that if it was made by a human, it’s art.  Interesting.

Then we got into a discussion about whether we as people are art because we were made and formed by other people.  So of course for our introduction period, we all took our art poses… 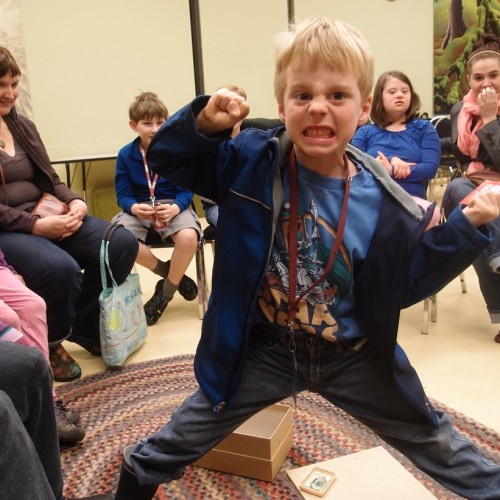 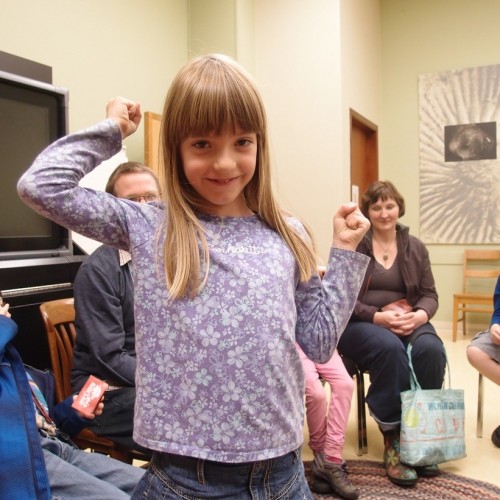 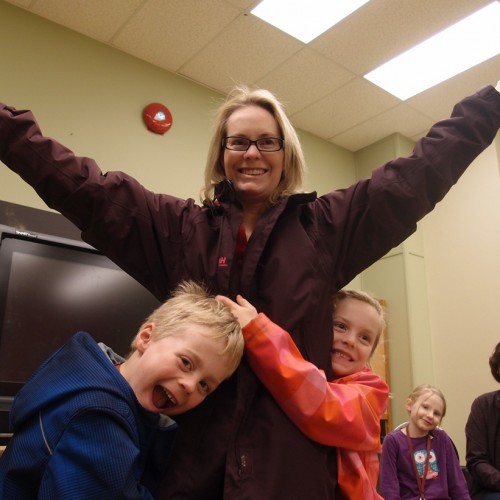 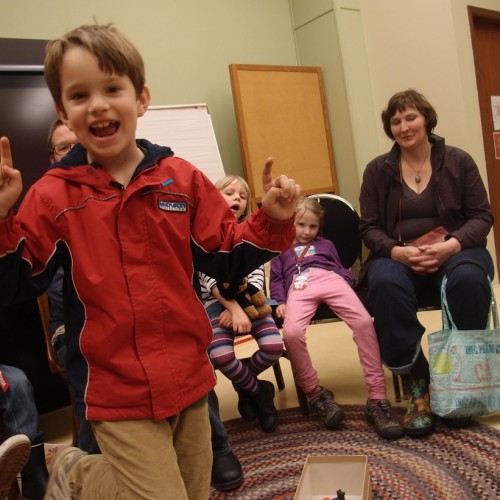 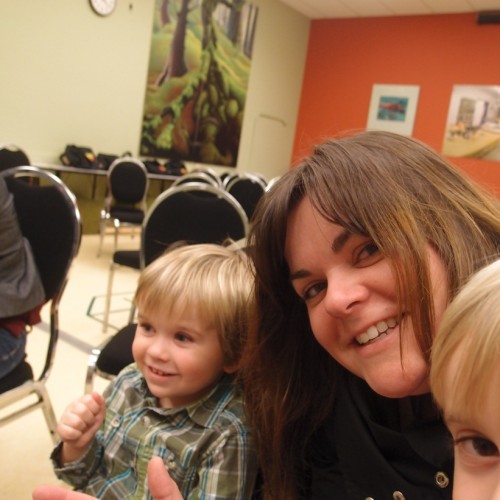 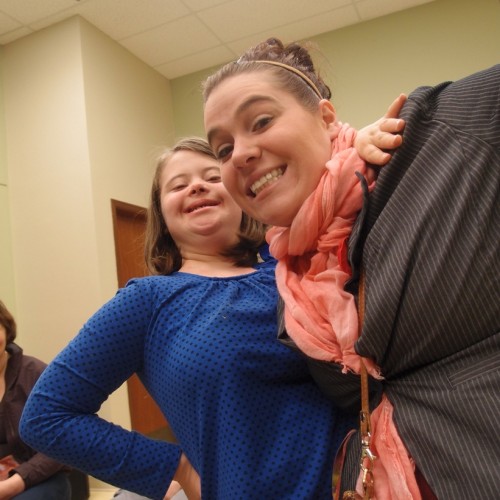 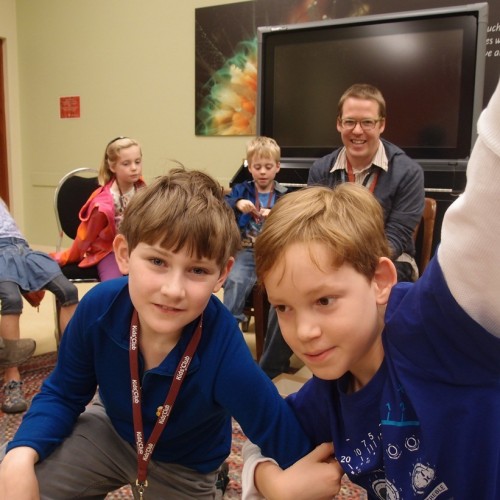 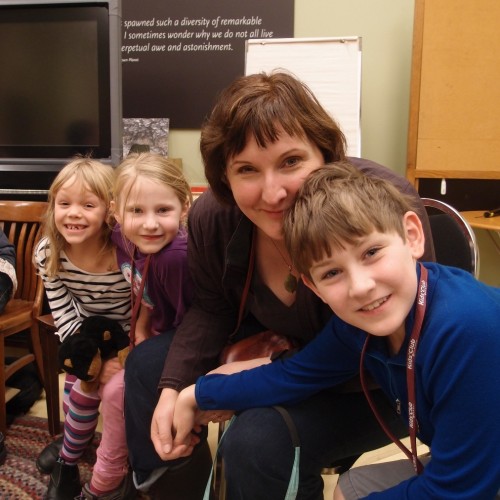 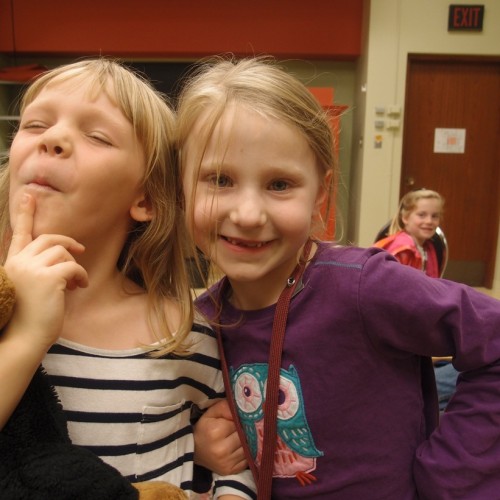 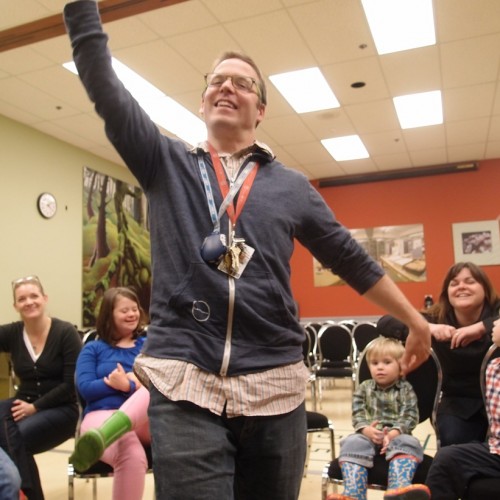 And then we got back to our discussion, which included talking about the rich and diverse art that has been made and continues to be made by First Nations communities all throughout British Columbia.  The Royal BC Museum celebrates this extraordinary and sophisticated history through the collection of over 14,000 works.

So we were off to meet Dr. Martha Black, Curator of this collection. 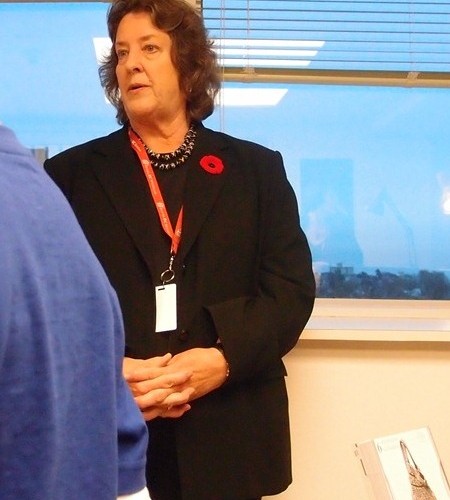 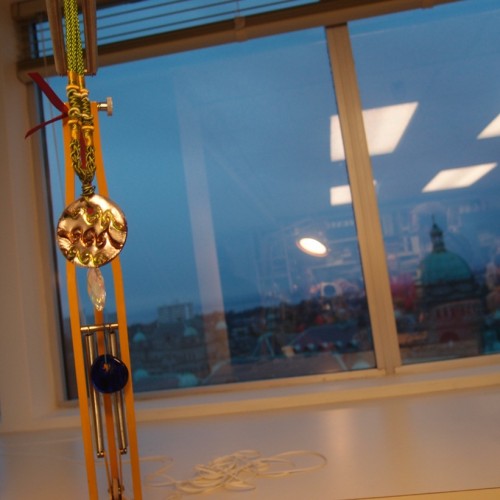 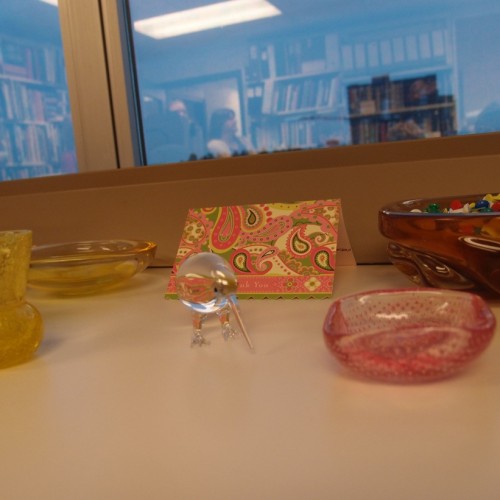 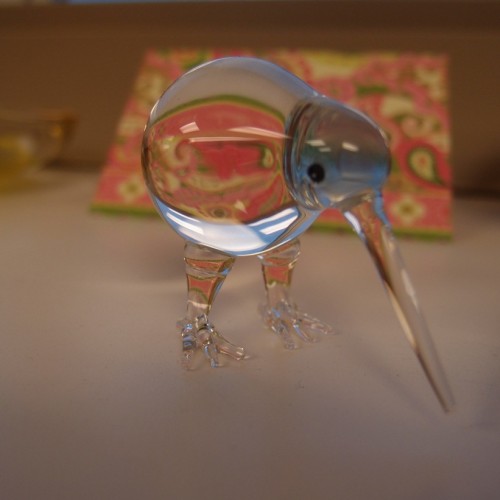 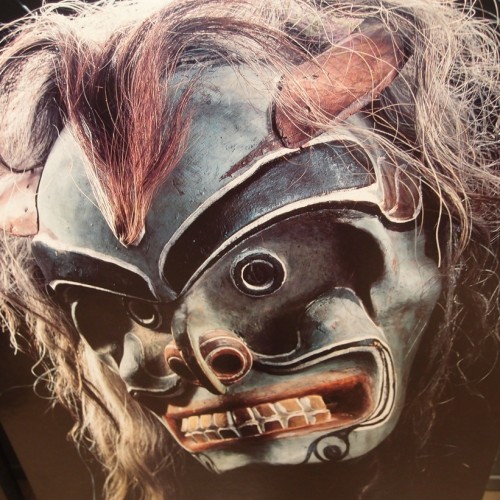 Martha has quite a view from her office.  And some nice personal mementos surrounding her as well.  And books…so many books.  I will get back to the books in a second, but first she talked about the Language exhibition that she is currently working on.

Which some kids remembered from last week when we met designer Ken Johnson.  We saw some of the ideas around design for the Language exhibition, and Martha showed us some objects that may be considered for the exhibition, and connections between the ideas of the project, and the objects that we currently have in our collection.  It is important to pick objects to put on display that can best tell the stories within an exhibition. 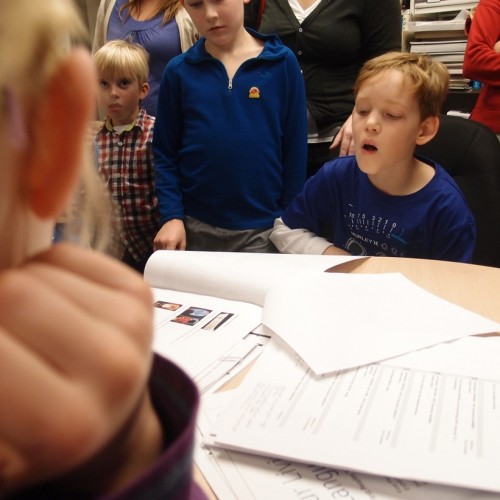 But it’s not just Martha.  Martha said how important it is to partner with First Nations communities when doing a project like this.  And the First Peoples’ Cultural Council is the primary partner for the Language exhibition.

And then she showed us a book of the top 100 artworks in Canada, as decided by the Winnipeg Art Gallery for an exhibition they put on.  There were lots of different artworks, of lots of different styles.  But on one page there was a mask made by Mungo Martin.  This mask was created for the opening of the Mungo Martin House that is in Thunderbird Park, just outside the doors of the Royal BC Museum.  The mask was danced for the occasion, and is now part of our collection.

And then we walked through the collection area to see it in person. 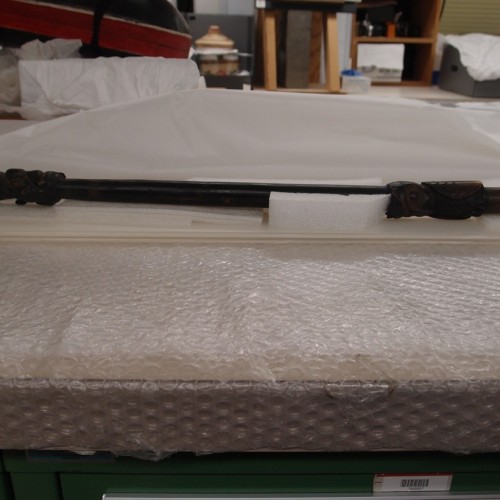 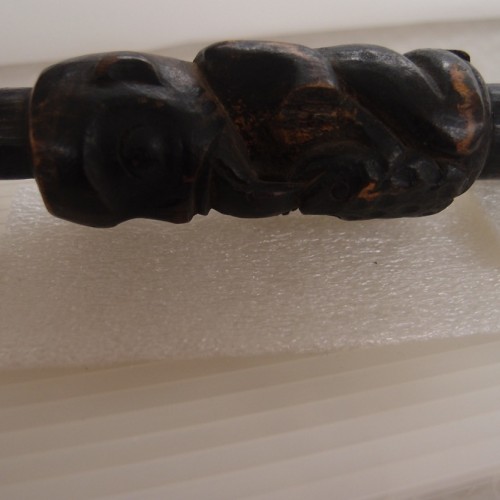 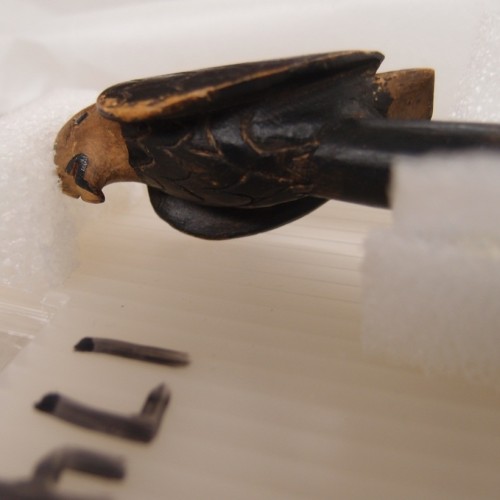 But you can’t see it here.  Martha asked kids not to take pictures, stressing that certain objects have ownership within particular families.  That the stories woven within the objects are for those particular families to tell.  And that it is important with any of these objects within the collection that we respect who has the cultural rights to the object and stories.

Kids were able to take photos of this talking stick though.  This is one of the objects under consideration for the Language exhibition.

Then it was off to the First Peoples gallery!

Martha showed the kids the masks within the Jonathan Hunt House.  She said that this house is both a museum exhibit and a real ceremonial house.  And in regard to cultural ownership, the house and the images remain in the Hunt family.

Then she asked us to listen.  Faintly we were able to hear a voice.  That voice was a recording of Mungo Martin, the same artist whose mask we were looking at earlier.

There was also the sound of the security guard saying the museum was closed…not as magical. 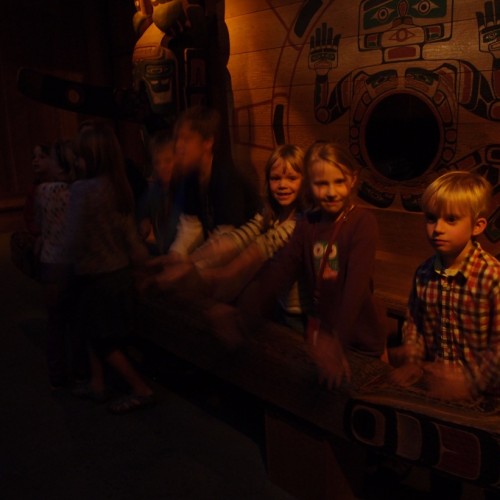 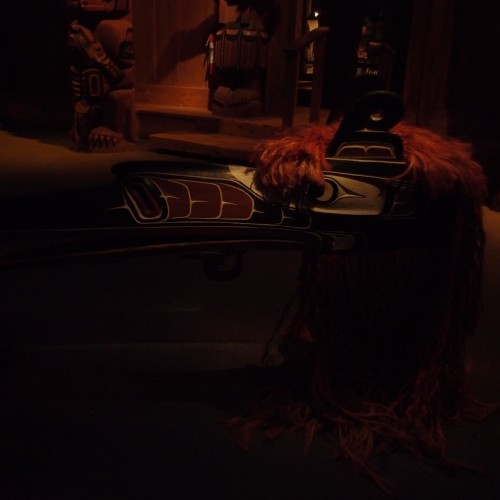 Even though the museum was closed, we weren’t done yet.  Martha took us to the Cave of the Supernatural.  She told us the story behind the masks in the cave, and said that the cave is modeled on a real cave that is a historic site. 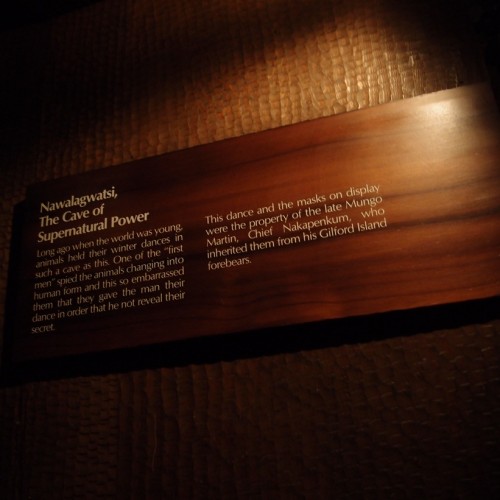 She showed us the signage that explains the cave and the masks.  These signs are what Martha works at creating in the gallery.  She writes the text (not for the cave though, it was before her time) that goes with the objects.  The trick she said is not to make it too long.  Which is not easy to do when there is so many interesting things to say!

Lastly, one of the kids had a question that he always wondered.  Why is there a bone through the nose of that man in the photo in the gallery.

We went to go check it out. 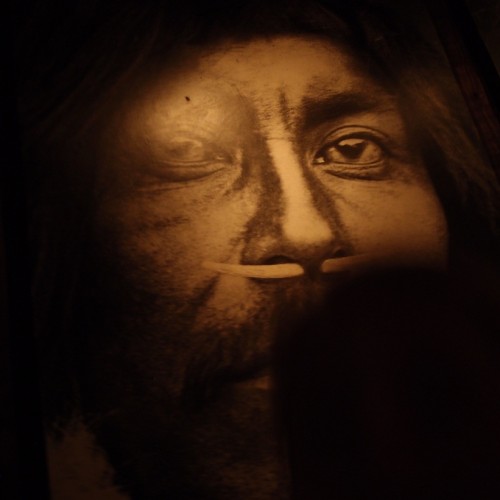 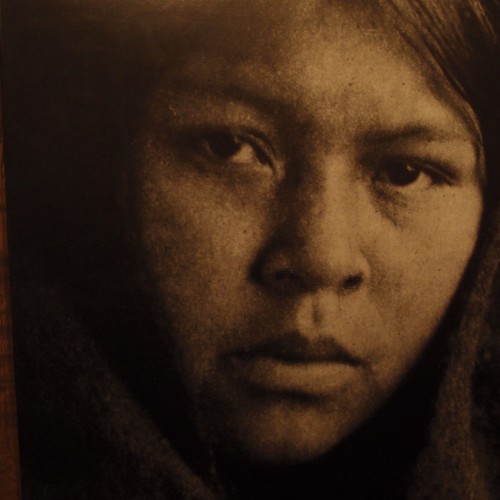 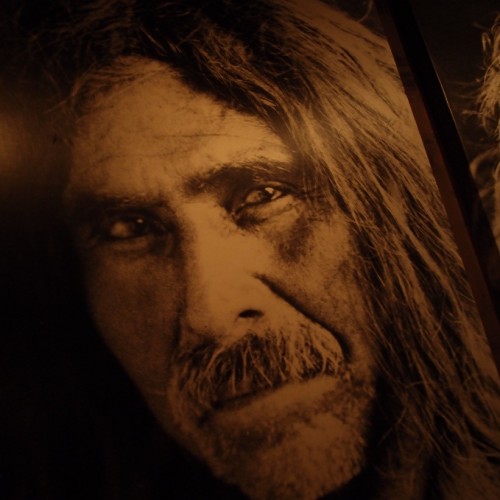 These are images within the Small Pox gallery.  Martha mentioned that many of the people in the photos were asked to wear what their grandparents might have worn- to show the cultural teachings and knowledge through dress.  And that body adornment, such as the bone through the nose, was part of that cultural heritage.  And really, it’s not that different from body adornment done throughout lots of cultures around the world (ear piercing for instance).

We listened closely again and heard the recorded voice of Bill Reid.  Another artist.  We were surrounded by artists today, and on our way out we looked at his gold box artwork in the Argillite gallery.

And also noticed something missing.  A work by Charles Edenshaw in the Argillite gallery.  But don’t worry, there was a sign saying that it is currently on loan to the Vancouver Art Gallery.

Next week we’ll meet Brian Seymour, one of the collection managers that moves objects in and around and out of the First Peoples gallery from time to time.  He might even move something for us.

Thanks Martha…and thanks to the families as well!