Mad dogs and Englishmen go out in the midday sun.  Well, I’m half English, so maybe I’m at least half mad to be sitting out here on the sunbaked clay of the Chopaka grasslands in southern British Columbia.  It’s noon on a hot August day here, not far from where the Similkameen River crosses into the United States. Dusty sagebrush shimmers in the heat.  Grasshoppers with red or yellow wings crackle by. Birders come here in the cool early morning to see the rare Sage Thrasher and maybe a Grasshopper Sparrow. I come here for the robber flies, but I don’t arrive until the sun beats down mercilessly. 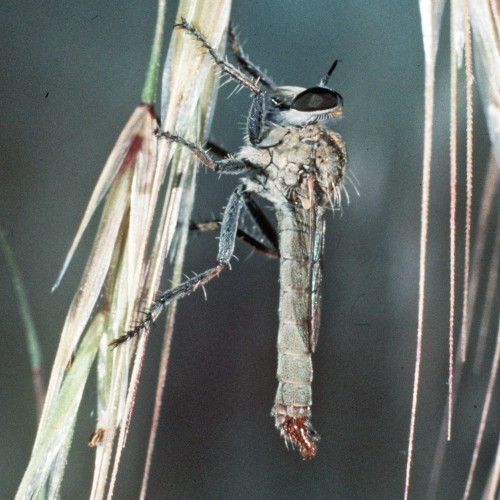 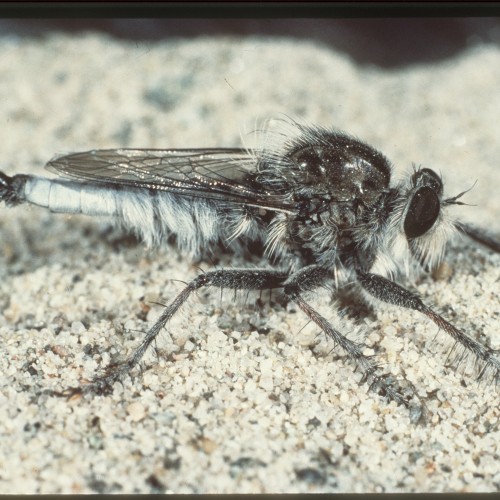 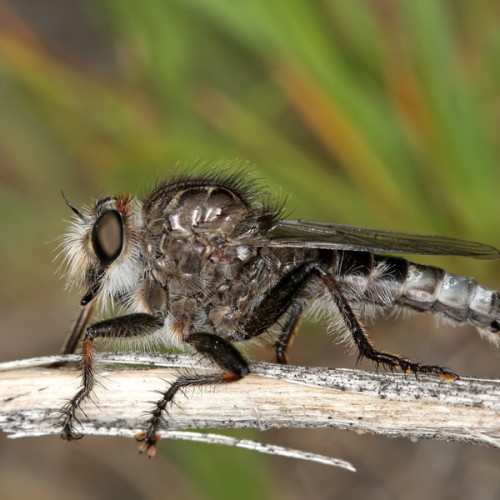 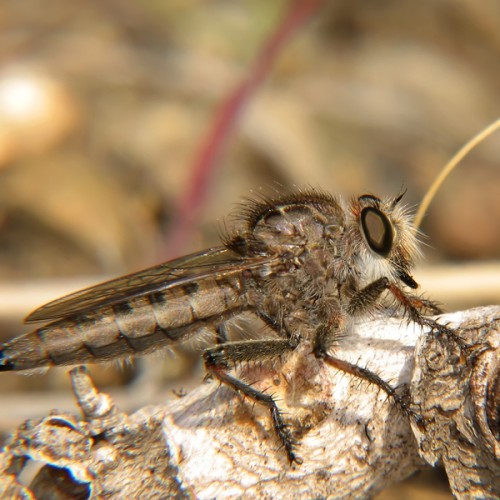 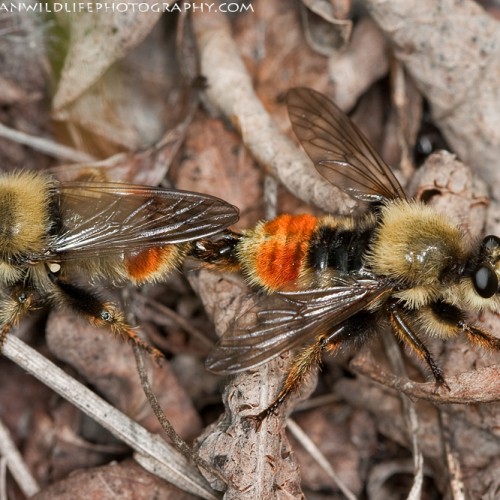 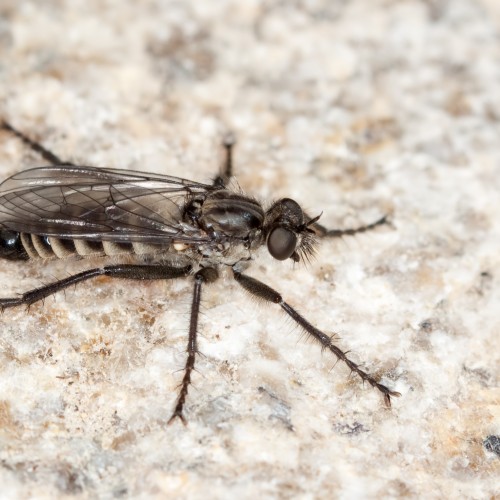 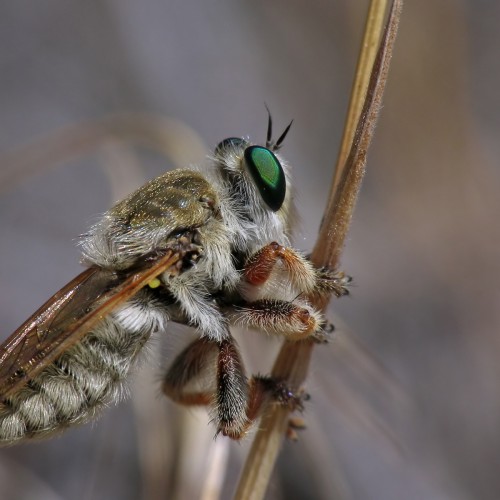 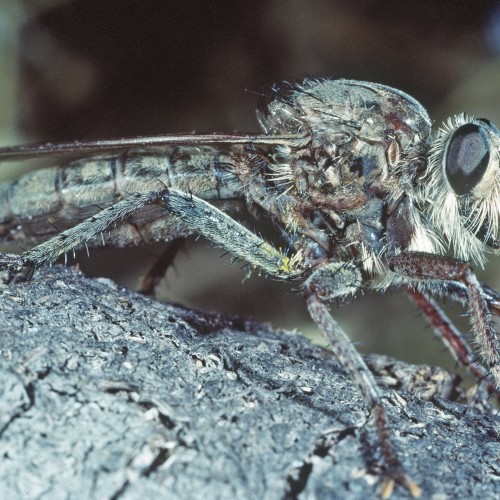 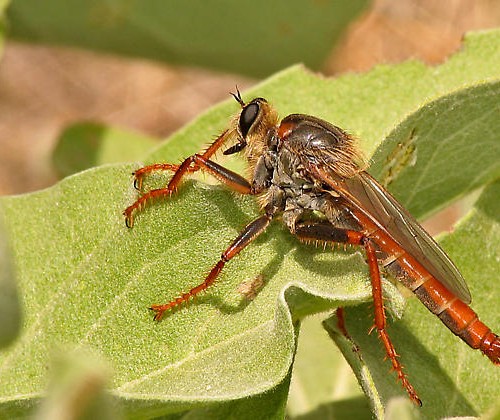 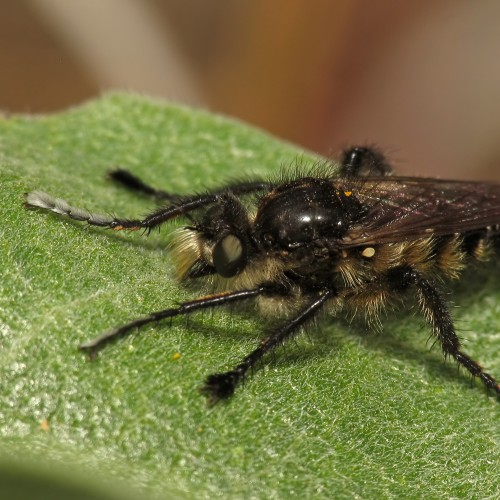 Many robber flies are hard to find, but here they are abundant and diverse.  As I sit quietly, a giant grey Proctacanthus occidentalis, the province’s largest fly (almost 5 cm long), pounces on an unwary grasshopper.  A bit smaller, but just as aggressive, a Stenopogon inquinatus bumbles by carrying the impaled corpse of a clearwing moth.  The prey is at least twice as heavy as the fly, but somehow this fierce predator has managed to get airborne with its catch.  Robber flies grab their insect prey with their bristly legs then kill it with an injection of neurotoxic saliva from their proboscis.  The fluid also dissolves the body contents and the fly sucks the prey dry just like you’d devour a milkshake.

A short walk away, only a few hundred meters from the International Boundary, is the only known site in British Columbia for Megaphorus willistoni. It is a very rare animal in a rare habitat; it’s one of our endangered insects.  At least 18 species of robber flies are considered potentially rare and endangered in British Columbia, and almost all are restricted to either these dry lowlands of the Okanagan and Similkameen or to the threatened Garry Oak meadows of the Victoria region.

Megaphorus is a fuzzy, yellow, little fly and looks just like a leaf-cutter bee as it hovers around the grassland flowers.  This mimicry of bees and wasps is not unusual in robber flies.  Some entomologists have thought that a resemblance to its prey might allow such a robber fly to approach its dinner without warning it off; indeed, Megaphorus usually attacks small bees and wasps.  But there is little evidence for this theory; most robber flies eat a wide variety of prey that doesn’t resemble them in the least.  Most people think that this mimicry of stinging insects (which is found in many different orders of insects) protects the copy-cat from other predators who recognize that bees, wasps and their kin can be dangerous.  In the pines and firs just above the grasslands here live several species of robber flies called Laphria.  It takes practice to tell them from bumble bees, because they are big, fat, and densely clothed in various combinations of black, yellow and red hair.

White-tailed Efferia buzz everywhere. A couple even land on my leg. Not to worry… despite their predations on other insects, robber flies are harmless to humans, although if you grab a large one in your hand, it will probably bite you.  Females probe cracks in the soil with sword-like abdomens, searching for the best places to lay eggs.  Most robber flies grow up in the soil, where the larvae hunt other insect larvae and pupae.  A few years ago, over the hills to the northeast, at Vaseux Lake, I discovered an unknown species of Efferia.  Actually, I first found specimens mixed in with those of a closely related species in the Canadian National Collection in Ottawa.  They had been collected years ago, but the collection data led me to their true habitat.  This species lives where there is sandy soil rather than clay, and eggs are not laid directly in the soil but are instead delicately inserted in the dried flower heads of bunchgrass.  I have described this fly and named it Efferia okanagana after the main place it lives. It also inhabits grasslands near Kamloops, just northwest of the Okanagan Valley. Like Megaphorus, this Efferia is rare and the Committee On the Status of Endangered Wildlife in Canada (COSEWIC) has declared it “Endangered”.

The distributions and ecological relationships of species like this, whose relatives live mostly to the south in the dry country of the western United States, can help us unravel the history of our grasslands and dry forests and explain the pattern of plant and animal recolonization following glaciation.  Other robber flies can reveal something about the histories of animals and plants originating in the north.  Lasiopogon ranges to the Arctic Ocean and some species have their closest relatives in Russia rather than in North America.  Today the Bering Strait isolates East from West, but for a very long time it was a huge expanse of dry land, a bridge for robber flies and other organisms to move from one continent to the other.

To me, sitting and sweating here in the sagebrush, all this is endlessly fascinating and vital to the understanding of our natural heritage.  Not madness at all.  But thinking about the Bering Strait doesn’t cool me down much.  My Scottish half, ever practical, reminds me to put on a hat.