I have been watching a female lizard in my garden slowly increase in girth as her eggs developed in May to early June. I recorded each day whether she was gravid or not, and noted when she lost her tail. Simple observational science is something I could do to better understand common wall lizard biology in BC while working from home. 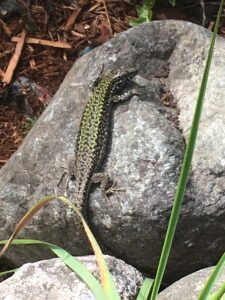 Here she was May 20—the last time I saw her with her original tail.

My notes around the time I think eggs were laid went as follows:

June 10 – basking on rocks, has folds of skin along the flank suggesting eggs laid.

I have watched our resident female wall lizard as her tail regenerated, and I saw her again yesterday (July 30) sporting a tail several centimeters shorter than the original. 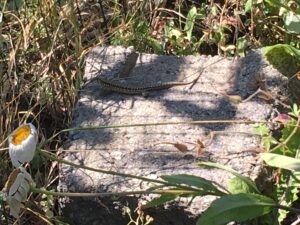 Our resident female hiding in the shade on a sunny July 30.

I patrol the garden daily to see what the lizards are doing, and when and where they are active. My wife will confirm this obsessive behaviour. But this morning (July 31) I dropped my daughter off at a day camp, and on return home, as I walked up my driveway, I spotted our first hatchling.

I gasped—I am not ashamed to admit it.

The hatchling already seems to have a favourite rock.

Lizards invaded our garden in 2019, and one year later we have a home-grown baby lizard. It looked pretty comfortable in its new habitat, so perhaps it hatched yesterday (July 30) or the day before. And there is no way to tell, without perhaps a series of DNA samples, whether this hatchling came from the female I have been studying, or whether some other female dug a nest in our garden. Young lizards leave their parents’ territory to avoid cannibalism, so this one may head for the hills. But it does give us an estimate of timing between egg deposition (somewhere between June 6–8, assuming eggs were not laid June 9 when it was cool and rainy) and the first appearance of hatchlings July 31.

Females mature in their second year and can have one to three clutches of eggs each summer, depending on latitude and local conditions, with clutches ranging from 2 to 10 eggs. In nature, incubation ranges from 6–11 weeks. Embryo development is about halfway at oviposition, and females bury eggs in sandy or crumbly substrates at the end of 10–20 cm tunnels (Van Damme et al. 1992). In a laboratory experiment, temperature dramatically changed incubation times, with wall lizards incubated at 32–35°C hatching 10 days earlier than lizards incubated at 28°C, and over five weeks earlier than those incubated at 24°C (Van Damme et al. 1992). We had a cool spring, and I am not surprised then that 50–52 days passed between the first evidence that the female had laid eggs and the appearance of a hatchling.