Working at home has allowed me to pay plenty of attention to the individual lizards in our garden. I can watch where they go, locate preferred basking spots in the garden, watch what they eat, and try to figure out when eggs have been deposited and, later, when hatchlings will emerge.

Individuals are easy to identify based on size, sex and scarring. Most lizards have tails that have regrown, and the relative length of the original tail helps identify each animal.

Our gravid female had a perfect tail until recently, but on June 5, I noticed that she had been attacked. Her tail was now less than a quarter of its original length. The stump was still fresh and had not grown over with new skin.

We have several domestic cats vying for our garden (they also like using our garden beds as a litter box). The complexity of our garden attracts lots of birds, and it’s prime hunting territory for pudgy suburban felids to roam and kill at will. One cat (we know him as Meow, because that is what he said when we asked him his name), is a frequent visitor to our yard. He is likely the local lizard lacerator. 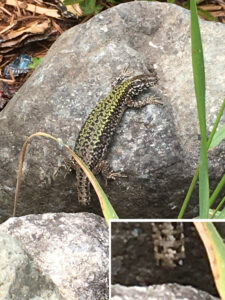 Our female lizard on June 5 with a freshly cropped tail (inset). 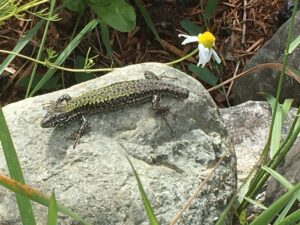 By June 10, the tail had healed and had a convex growing bud. 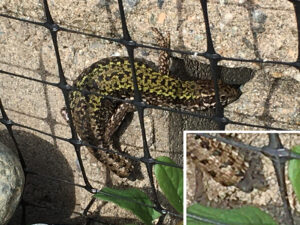 By June 19, the regrown portion was obvious at about 3 mm long (inset). 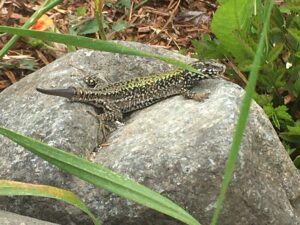 By June 26, the tail had seriously sprouted. 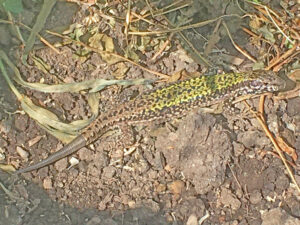 And on July 4, we estimated the regrown portion of the tail was 29 mm.

It appears that the growth is slow at first as the tail heals and the tissues organize themselves, but between June 19 and July 4, the tail grew an estimated 26 mm. The regrown tail will never be as long as the original, but it can be shed again if the lizard is attacked.

Nature is amazing. Field bindweed, an invader from Eurasia, grows at an alarming rate in our garden. Beans can go from a mere sprout to a massive flowering plant in a few weeks. And we can add lizard tails to our list of fast-growing crops.

When we harvest leafy veggies like lettuce, chard or New Zealand spinach, we take a few leaves for our meal and leave the rest of the plant to grow. The would-be predator attacking the wall lizards in our yard is also harvesting tails and letting the lizards regrow a new crop. I don’t think domestic cats have the mental capacity to intentionally farm lizard tails, but that is effectively what is happening.