Rain this June has reduced our watering bill. Rain helps the plants we want, and also helps the weeds, so we spend a few hours each weekend weeding here and there. We are now well into the growing season, and we got a few new plants. From left to right below: the wasabi plant;  behind it, an acacia (which will be potted—can’t wait to see it flower); a raspberry that creeps along the ground (YAY—ground cover in the food forest that produces food and limits the regrowth of grass); and a gooseberry. The ferns (below) we have had for a while in the shade along the side of the house and they need some TLC. Both sides of the house need some thought and effort once the main food-producing areas are established. The wasabi is growing well, and that acacia was so crazy looking that I couldn’t resist. 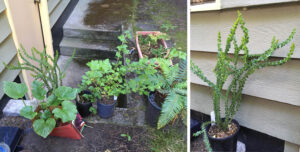 In the front food forest we have apples, cherries and blueberries well on the way.

The honey berries ripened early and we had them in pancakes. The front third of the garden is covered in wood chip and has three new sea buckthorns (far right below), a rose (middle) has set itself along the driveway, and I buried a few salmon berries to see if we can grow a few of those—that’ll bring in the hummingbirds. It is an area the deer can access. They seem to leave it all alone, and now that the grass is bashed back, only minor weeding is needed.

The back yard is looking lush. Along the eastern fence (on the right in this panorama) is our thornless blackberry—last year we had about 3 kg of berries—this year it is COVERED with flowers. What a bounty—and we save them frozen for winter crisps and smoothies (or for a small human who likes eating frozen berries like candy). The area around the sunken patio needs some effort—there are herbs in there—but the grass and other agressive plants have run wild.

The peppers, squash, cucumbers and pumpkin are growing nicely out back, although they are along the west side of the garden and our neighbour’s cedar hedge does drain the life from that soil. Plants grow poorly the closer they are to the cedars. Volunteer kale holds on and will seed again—yay kale. 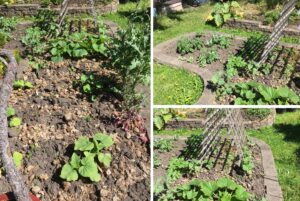 Strawberries are ripening daily. You can’t beat the flavour of home grown strawberries warmed in the sun.

Ladybird beetles are everywhere. We have at least seven lizards in the front garden, and maybe three or four in the back. The female wall lizard which was obviously loaded with eggs now looks lighter, so we can expect hatchlings in a few weeks. The photo below is the male that may be the father of this year’s hatchlings, and as far as I can tell, our only garden lizard in the front yard with an intact tail. 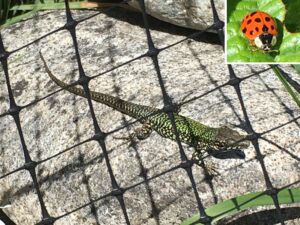 The poppies are popping up all over the place. Tomatoes and cabbage are rocketing up, and the New Zealand spinach is ready for selective harvest. Chives have gone to seed, a leek has a seed head taller than Anna, and the lettuce is still growing well. There’s so much to eat in such a small space.

The usual avian suspects are flitting about—Bewick’s wrens; crows, which are now dive-bombing pedestrians; robins, which have nested and are much quieter; and Anna’s hummingbirds, chipping sparrows and house finches, which pop by regularly. We were buzzed by an osprey the other day—that was neat to see. 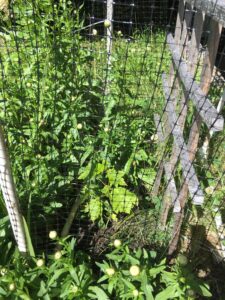 And I finally got around to protecting our grape with netting (above). The local mule deer seem to notice it once it grows about six leaves, and then they strip the plant. Not this year.

The garden is never finished, and it is always a learning experience. We are starting a chop-and-drop program to leave cut debris in place rather than taking it over to a separate compost pile. The chopped and dropped debris acts like leaves in a forest to reduce rain compaction of soil, and eventually it rots and adds organic matter to the surface – to be re-worked by nature. Probably the greatest thing to see is our daughter learning about the seasons in the garden, where food really comes from, what is ready to eat and what is not.