New Shark and Skates for BC

When a trawl net goes down to the sea floor, you have no idea what will appear when the net is hauled to the surface. Some fish are caught as the net descends, others as the net ascends, but most are caught at the target depth. One thing is for certain, trawl nets sample very specific habitat – open smooth substrates where the net is unlikely to snag.

Since we don’t drag nets over rocky habitat, that habitat is poorly known. You’d think that in the dark depths, substrate wouldn’t matter – but apparently it does. And you’d think we’d already know whether a fish the size of a coffee table inhabited our waters. Not so. Since 2005, we have discovered three new skates in BC, and you guessed it, one was the size of a coffee table. The first Angel Shark for British Columbia was discovered in 2016, and captured on camera, not a net.

The Pacific White Skate (Bathyraja spinosissima) was caught in a trawl net by accident. From footage from submersibles, we know this species cruises about 1 m above rocky habitat. The single specimen caught in 2005 had strayed over net friendly habitat. When this skate was caught, we were unable to assign it to species. Its DNA suggested it was a species from the Atlantic. After a careful measurements, we determined it was a Pacific White Skate, and its discovery was published by Orr et al. (2019). 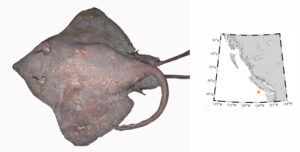 Bathyraja spinosissima (Pacific White Skate) – this specimen was the first to be included in DNA barcoding which gave us strange results when the tissues were originally sequenced. This large male is the first adult male in museum collections, a first from BC, and extended the known range north from Oregon.

Orr et al. (2019) also listed a second new skate species for BC, the Five-spined Skate (Bathyraja microtrachys). Five males were collected west of Tofino, off Vancouver Island in 2005. These are the only adult males known for this species.

In 2009, a third skate species was discovered, the Commander Skate (Bathyraja lindberi), and was published by King et al. (2019). This is a northern skate, and the discovery in British Columbia extends the species’ range south about 600 km. 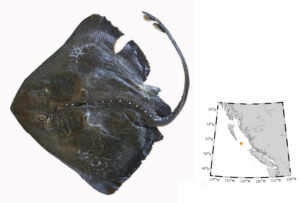 Bathyraja lindberi (Commander Skate) – appeared in 2009, and now is known from the Sea of Okhotsk, the Bering Sea, Aleutian Islands, south to Queen Charlotte Sound.

Finally, in 2016, a Pacific Angel Shark (Squatina californica) was spotted and photographed by Mark Cantwell while diving off Clover Point, Victoria. The photograph was proof enough of the species’ presence (King and Surry 2016). Since this species was known from a single specimen in Alaska, one from Puget Sound in Washington, and exists south to the Gulf of California, its discovery in British Columbia was only a matter of time. More details on the Angel Shark can be found in Pietsch and Orr’s (2019) magnum opus on Fishes of the Salish Sea.

Squatina californica (Pacific Angel Shark) – was is known from one specimen in Puget Sound, Washington and an old record from Alaska, and finally has been confirmed for British Columbia. Photograph by Mark Cantwell, April 30, 2016 off Clover Point, Victoria, Vancouver Island.

For more details on all cartilaginous fishes in British Columbia, buy the latest RBCM handbook by King and McFarlane due out May 2020.