Auto Detailing by Maaco? No, Mako.

Last summer my wife and I bought a new car – it is less than a year old and has already transported quite an assemblage of BC species (Southern Resident Killer Whale foetus, Mule Deer, River Otter, Red Fox, Northern Alligator Lizard, Common Wall Lizard, Commander Skate, and 49 species of birds – including the museum’s first Brown Booby). The most recent passenger was a 1.2 meter Shortfin Mako Shark (Isurus oxyrhinchus) which easily fit into the back of a 2018 Nissan Leaf. Chalk up another reason why electric cars are awesome. 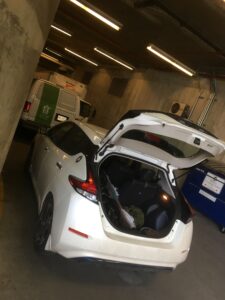 The Mako Shark (wrapped in plastic) arrives at the RBCM loading bay.

As far as I know, this is the second Shortfin Mako Shark specimen from BC waters. The first specimen, from 185 nautical miles west of Cape St. James (Haida Gwaii), was made into a taxidermy mount and only a few of its teeth were deposited in the Royal BC Museum collection (993-00039-001). You have to wonder how often they range this far north?

The mako shark thawed and ready for a long soak in formaldehyde.

This new mako, found September 27, 2016 on shore in Florencia Bay, Pacific Rim National Park Reserve is almost perfect. It had been studied by Jackie King (Fisheries and Oceans Canada), tissue samples were taken,  and then was shuttled to the Institute of Ocean Sciences (IOS) in Sidney. I picked up the fish at IOS and kept it frozen until I had the time to prepare the shark for the Royal BC Museum collection.  Mako sharks are most streamlined representatives of the Family Lamnidae, the same family containing the Great White Shark. It was a thrill to see this amazing fish up close. Its only damage came from scavengers – the left eye is missing, and something – a wolf(?) – had ripped at the gills on the left side.

Tooth rows are easy to see in the jaws of this Shortfin Mako.

The teeth are amazing – and let’s face it – this is what most people want to see on a shark. But have a look at the tail! Without an efficient tail – the teeth would have nothing to bite. Mako sharks are amazingly fast and almost appear nervous when they are swimming – they are certainly the Formula-e cars or jet fighters of the shark world.

The base of the tail on our new mako shark.

Makos have a lateral keel at the base of the tail which allows the fish to efficiently oscillate its tail fin from side to side. In lateral view the base of the tail is narrow – in dorsal / ventral view – the tail base is broad. Salmon Sharks (Lamna ditropis), Porbeagles (Lamna nasus) and Great White Sharks (Carcharodon carcharias) have this same feature – it is all about efficient locomotion – hydrodynamics which submarine designers envy. Even the Ninespine Stickleback (Pungitius2) has this basic tail structure – but on a far smaller fish. Evolution is awesome.

Enough fish worship – back to the task at hand. Preservation of a large fish. You have to make sure the internal organs and muscles fix – and since formaldehyde takes time to infiltrate tissues – you inject 10% formaldehyde deep into the muscles to make sure the specimen fixes from the outside in, and inside out.

If the specimen does not fix fairly rapidly – then decay of the tissues begins. The specimen degrades and gas is produced. A gas-filled specimen displaces fluid and can result in a bit of a mess in the lab. When I was a student, we put a sizable sample of suckers in a vat of formaldehyde, closed the lid, and then left them to fix. Oily suckers are always a challenge to fix, and these were no exception. They bloated over night and displaced formaldehyde – which spilled out of the vat. The spill was large enough to draw the attention of the University of Manitoba’s Workplace Health And Safety team. Ooops.

Reptiles also can be tricky to fix – their skin slows the uptake of formaldehyde. As a dewy-eyed student I was keen to check out all the specimens in the vertebrates lab – and was particularly happy to find a forgotten jar with dark brown glass – a mystery. I had to know what was inside. When I reached in and grabbed the snake – it simply fell apart – ribs straining through my fingers. The mouth and cloaca allowed formaldehyde to enter and so the snake’s head and tail preserved well. Its body though, had rotted from the inside out and was mush.

The rattle from the rotten Pacific Rattlesnake (Crotalus oreganus).

This mako shark was no different – I injected about 500 ml formaldehyde into the body cavity to make sure the internal organs fixed well – then left for the weekend. After a day in formaldehyde, the body already was rubbery and well on its way to making a decent specimen (yes I came to work on a Saturday to check on my precious). It also was not floating – that is a really good sign that the specimen is fixing well and not filling with decay gases. 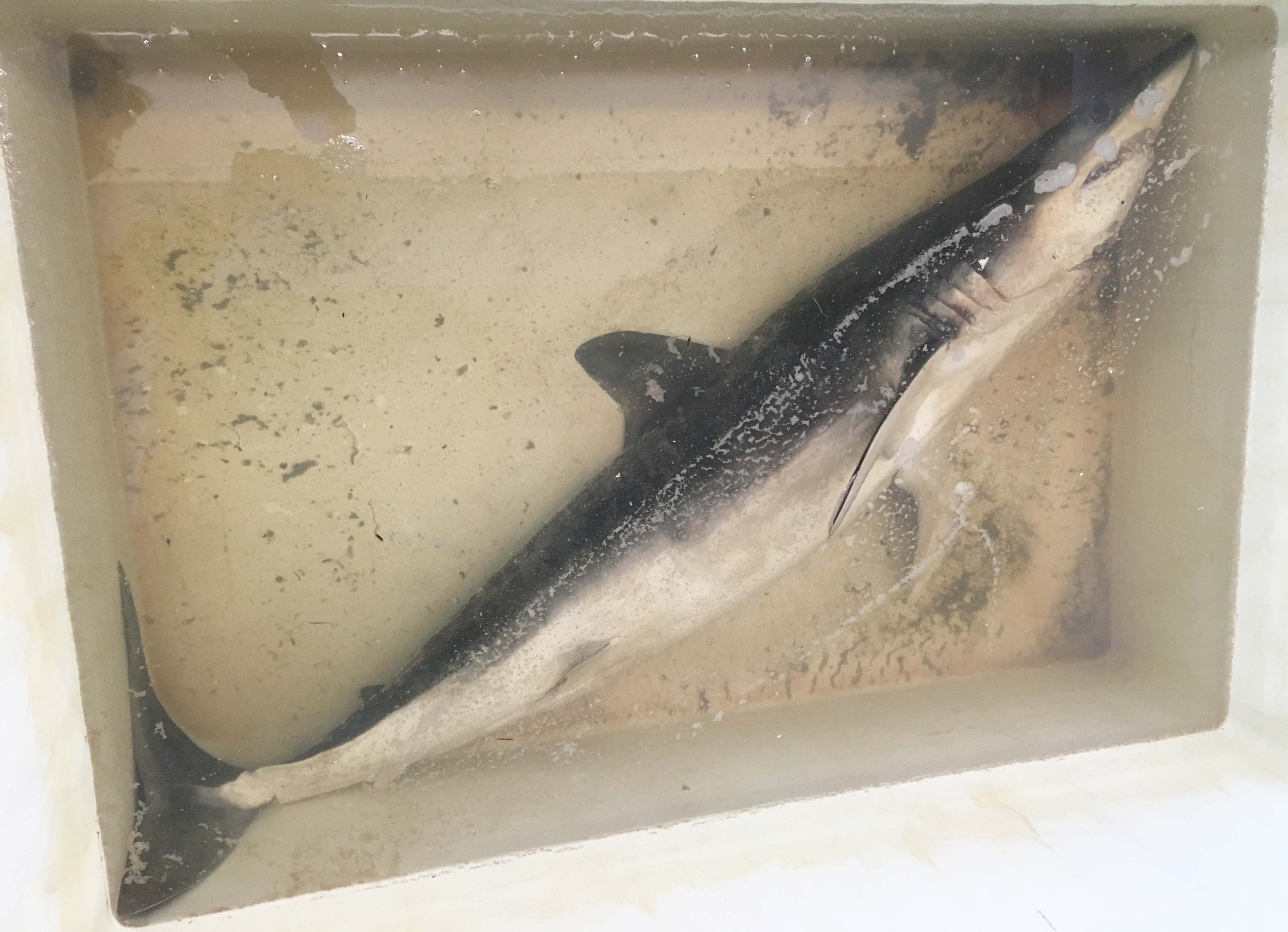 The mako shark after a day in formaldehyde.

Once the mako shark is fixed (maybe three weeks in formaldehyde just to be sure), then it will get a rinse in water for a few days, and will go into a vat of alcohol for permanent storage. Alcohol is far easier on the eyes and nose than formaldehyde. Ethanol or Isopropanol are our preservatives of choice. Call me crazy, but I am guessing this shark will be a popular item during museum collection tours, so it better be stored in a manner that is fairly safe for visitors. I may as well get a few more larger fishes preserved while the formaldehyde vat is fresh – next up is a 1 meter Blue Shark (Prionace glauca) and a similarly sized Pacific Sleeper Shark (Somniosus pacificus).