Museums contain the commonplace, normal, typical specimens as well as the specimens we call TYPES which serve as the golden standard when doing systematics research. But the real attention goes to the oddities – they seem to naturally draw your eyes away from all other specimens. Leucistic birds, albinos, a marmot with overgrown incisors, an Orca with nasty dental issues, an Orca with spinal deformity – these are the specimens that get the WOW vote on collections tours. 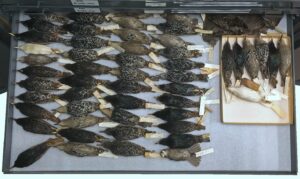 Albino Starlings in the Royal BC Museum Ornithology collection – abnormal specimens certainly do catch your eye.

A year or so ago we were clearing out an area we referred to as Room 17 (our version of Area 51), and found jaw fragments from a Sperm Whale mixed with the bones of other whales. Sperm Whales have teeth along the lower jaw but no teeth along the upper jaw and Sperm Whale jaws are long and straight. It does not take a scientific eye to notice what is wrong with these jaws. 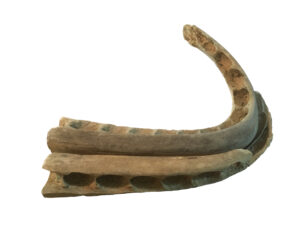 The section of Sperm Whale jaw in the Royal BC Museum collection.

Both dentary bones are hooked to the left and it looked like the teeth were fairly normal with decent sized sockets. We have no idea what the upper lip looked like – but I assume these jaws just hooked out of alignment and hung out to the side of the animal. What a drag that would have been. The jaws are large – so this animal was able to feed – the teeth towards the back of the jaw probably functioned normally and it certainly could have performed suction feeding to catch fishes and cephalopods.

Strangely enough, there is no information with these jaws to say when and where the animal was caught. Whaling here in BC ended within my lifetime (including the live capture of Orcas as a form of whaling – some would say jailing) – so I can only assume this jaw was collected pre-1970s when whaling stations were still actively processing Sperm Whales. 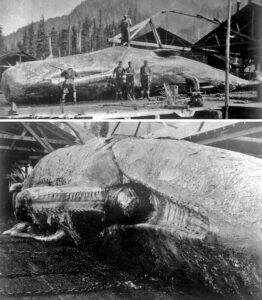 Sperm Whales with normal straight jaws (Image A-09221 (top) and Image A-09220 (bottom) courtesy of the Royal BC Museum and Archives).

Jaw deformities are not that rare in Sperm Whales – there are several reports published and some of the deformities are shocking – some are stubby, others in a tight spiral like a conispiral snail shell (see: Murie 1865, Thomson 1867, Nasu 1958, Spaul 1964, and Nakamura 1968).

This specimen is not cataloged in the Royal BC Museum Mammalogy collection, there is no record in our database, and no mention in the museum’s annual reports. Perhaps whaling records will mention this animal – I can’t imagine this whale was processed in the ‘fishery’ and the set of jaws saved with no comment made of the deformity. Time to go CSI on this dentary record.

NAKAMURA, K. 1968. Studies on the sperm whale with deformed lower jaw with special reference to its feeding. Bulletin of the Kanagawa Prefecture Museum of Natural History, 1: 13-27.