Me in front of the Terry Fox monument in Thunder Bay, Ontario, 1987.

Right now at the Royal BC Museum, Family: Bonds and Belonging is running concurrently with Terry Fox: Running to the Heart of Canada. The two exhibitions stand side by side. This is personally fitting to me because I have long associated my grandfather with Terry Fox, and there is a photograph of me with my grandfather in the Family: Bonds and Belonging exhibition.

Here’s how I have linked them in my mind: Terry Fox started his run on April 12, 1980 in Newfoundland. One year before on April 12, 1979, ‘Gramps’, a Newfoundlander, died of cancer. So when Terry dipped his leg in the Atlantic off the east coast of Newfoundland, it seemed extra meaningful to my adolescent mind.

Terry’s story unfolded when I was an impressionable teenager and like millions of Canadians at the time, I was riveted by his story. Plus, he was from Port Coquitlam, just across the Fraser River from where I lived in Langley. We were practically neighbours. Like most of BC’s Lower Mainland, we felt like Terry was ours.

I remember imagining what it would be like if Terry made it over the mountains and down into the Fraser Valley. But as we all know, that day didn’t happen. In BC, we never saw the van up close. But now we can.

If you remember Terry Fox, like I do, it’s compelling and moving to peer inside the van that is parked just inside the Royal BC Museum lobby. It’s not so hard to imagine him there: A sweaty, young athlete with an astounding will. 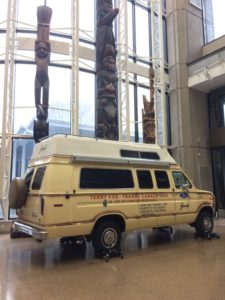 Terry Fox van in the Royal BC Museum lobby.

When I watched Terry’s van being pushed into the Royal BC Museum before the exhibit opened, even though I knew it had been rebuilt and fixed up and a punk band lived in it for years, it still felt real. It still felt like a return. A homecoming. It felt important.

Like a lot of Canadians, I remember the terrible day that Terry’s run ended. I remember watching his heartbroken mom and dad at his side on TV as he was loaded into an airplane to fly home. I remember well the day Terry died. And after all these years, I can still not get over that he ran a marathon a day, for months, on one leg.

There’s nothing like an indisputable hero in your midst to make you feel inadequate. That sounds cynical. I’m not trying to be cynical. I think Douglas Coupland said something like ‘It’s impossible to be cynical about Terry Fox’. I think this is true. Terry’s accomplishments are so exemplary, so astonishing, so inspiring, that I am humbled by what he accomplished and what he has done since he died. I don’t feel less around his legacy, I feel in awe, inspired,  hopeful.

Where I feel inadequate is in my everyday habits at the Royal BC Museum while the Terry Fox exhibit is here. There’s nothing like our every day routines to put us on autopilot. Every morning since the exhibit opened in April, I’ve walked past Terry Fox’s van on the way to my desk. Terry Fox’s van. At first I couldn’t look at the van without a lump in my throat, and now I often rush past it like it’s nothing.

Terry’s incredible story lives with all of us who remember him and it is here now at my museum in his van, in his running shoes, in the thousands of letters children wrote to him and it lives in that jug of Atlantic Ocean he scooped up that first morning in April 1980. The jug of water right now sitting not far from a photograph of me with my Newfoundlander grandfather. The Atlantic Ocean on exhibit and in my veins. Terry Fox and Gramps, their proximity here on the Pacific coast, making this big country feel small and close. 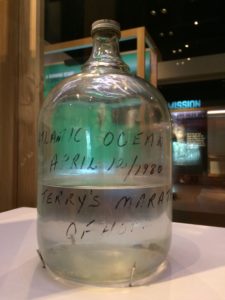 The jug of Atlantic Ocean water from the first day of Terry Fox’s Marathon of Hope in the Terry Fox: Running to the Heart of Canada exhibition.

Me in front of the family photograph that is in the Family: Bonds and Belongings exhibition.

At museums we often talk about objects telling stories. For me this summer, the objects in these exhibitions tell me to slow down and remember that there is sacred in the every day.  Until the Fox exhibition closes in October, I’ll try not to rush past the van on the way to my desk.