Lizard in a Snake Plant

Another lizard arrived in BC last week. We can add Brown Anole (Anolis sagrei) to our list of accidental imports – but this certainly is not the first one to have arrived by accident in BC. Many lizards travel the globe as stow-aways. This one travelled here in its egg along with a Snake Plant (also known as the Mother-in-Law’s Tongue). Sansevieria are popular houseplants – Snake Plants are easy to keep and look neat. My wife bought one for our living room – no lizards in our plant though. 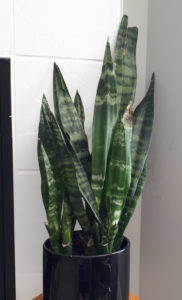 Where was the plant from? Who knows. This plant could have come from anywhere. Brown Anole’s have invaded Florida, and southern parts of Georgia, Louisiana, Mississippi, and Alabama. They also have invaded Hawai’i, southern Texas and southern California along with their relative the Green Anole (Anolis carolinensis). The Green Anole is native to the south-eastern United States, and in their native range, Green Anoles may be forced out of their usual habitat by their exotic relatives. Brown Anoles are native to Cuba and the Bahamas.

Even if it got loose, this anole would not survive our winter. It was no real threat to our environment or fauna, but does show that the transport of exotic species is ridiculously easy – an egg in the soil in a plant pot. This time we are fortunate. Only one egg was present. Anoles are light-weight arboreal lizards which lay one egg at a time, and they are not parthenogenetic. Anole eggs develop in alternate ovaries at about a two week interval – if I remember correctly. This ensures the female lizard is not excessively encumbered, and for us it meant that only one egg likely was present in the pot (or any other pot at the home hardware store).

Brown Anole eggs are a bit bigger than a Tic-Tac candy, so no wonder they are overlooked – they also are buried a centimeter or so in the soil – so they’d be out of sight. As long as the soil was not disturbed, was warm and moist – but not too wet, and the egg was not rolled, the developing embryo would survive transport.

I wonder where this lizard’s brothers and sisters ended up? They could be anywhere. Since the lizard travelled here in an egg, I vote we name it Mork. Na-Nu Na-Nu.