Yesterday I worked with Chris O’Connor from our Learning Department – we took some children on a tidepool tour. The main point was to chat about museum collections and things we record or measure when we are out sampling. We didn’t go crazy catching fishes, only taking 3 Tidepool Sculpins (Oligocottus maculosus) in the end. But we talked about our role as museum researchers, and why we take more than 1 specimen (if possible) to get an account of variation within and between species. 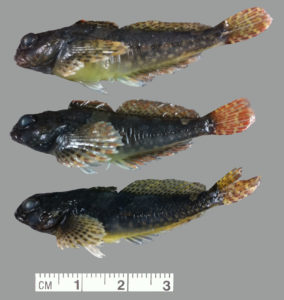 You can see slight differences between these fishes – even an injury – just like the subtle, or not so subtle differences we see in each other.

The three fishes will be added to the Royal BC Museum’s ichthyology collection, but before that, they are fixed in 10% Formaldehyde. Researchers used to drop fishes directly into Formaldehyde – many fishes died horrible deaths. When I accidentally get Formaldehyde in a cut – it stings intensely – I couldn’t imagine being dunked directly into that chemical.

Today we are more humane, and give fishes an overdose of anaesthetic before immersion in Formaldehyde. They are dead before they are fixed, and are preserved with a relaxed posture. The primary anaesthetic I use is 2-Phenoxy-Ethanol, but it is hard to get without ordering from a chemical supply company, and the chemical is a suspected carcinogen. I still have about 500 ml of the stuff – so I will use up what I have. Do I really want to buy more? Maybe not.

Do we have safer options? Yes, Clove Oil is a good anaesthetic if mixed as an emulsion in a small volume of 99% Ethanol. But you have to carry a jug of 99% Ethanol everywhere you go – that may not go over well at a Police check-stop. The up-side to this chemical mix is that you smell spicy at the end of the day if you accidentally spill some on yourself.

People have tried Alka-Seltzer tablets. They fizz and release CO2, which knocks-out fishes – but the process is slow and some fishes (those like catfish that gulp air to survive in low oxygen conditions) are resistant and survive way too long in a stressful condition.

A few months ago I tried using Oragel (20% Benzocaine) on European Wall Lizards – colleagues had found it worked well on amphibians. They put Oragel along the spine of an amphibian and it soaks into the skin; I give lizards an oral dose. It renders bullfrogs and wall lizards unresponsive in 20 seconds to a minute.  Oragel seems to be a convenient anaesthetic for these invasive herpetiles.

Yesterday, I told the tidepool group that we’d be performing an experiment – I tried Oragel for the first time on the 3 sculpins we caught. As I hoped – less than 20 seconds and the fishes were out cold. 2-Phenoxy-Ethanol takes about the same time on similar sized fishes.

The beauty of Oragel is that it is readily available, and if you run out, you can stop by the nearest pharmacy. It also is safe – we use it on sore teeth or gums. Perfect – it works fast on specimens and is safe for the researcher.