A Winter so Harsh

This winter has been cold here in Victoria – relatively speaking. We have had lots of rain, several rounds of snow – and I even had to shovel my driveway and sidewalk. Actually I have had to shovel several times this winter. The rest of the country is not all that sympathetic to the wintery-woes of its Pacific Islanders.

One odd feature of Victoria is that Anna’s Hummingbirds are present year-round – because people feed them. Without artificial feeding stations, they likely would migrate south in autumn with the Rufus Hummingbird and return each spring. It still strikes me as strange to see a hummingbird in winter – given that I moved here from Winnipeg.

In my neighbour’s yard there is Holly bush that is a regular nesting site for our resident male Anna’s Hummingbird – the spot must be coveted because the prickly leaves are a great deterrent to would-be nest thieves. 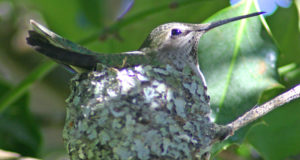 This nest from 2005 was near the junction of Government Street and Niagra Street in James Bay – also in a Holly bush.

Our hummingbird – yes we are possessive even though we don’t feed hummingbirds in winter – is a regular visitor to our veggie garden and flowers in summer. It stayed this winter even though it was snowy and cold. Someone nearby must have a hummingbird feeder.

Not all Anna’s Hummingbirds were so lucky this year. Today I received a nest containing two feathered nestlings which were snuggled together in their soft little lichen-cup nest. This is certainly an early nesting attempt – they are known to nest from February to August, but nesting this early in the spring is a big risk. 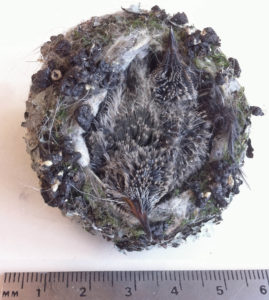 The fate of the female is a mystery (males don’t raise their young). Did she hit a window? Run short of food and die? Did a free-range domestic cat get her? These two nestlings were in a sheltered spot alongside a house here in Victoria, but without a parent, they didn’t last long. Natural selection can be as cold as this winter.