The Archaeology and History of Macaulay Point

Inspired by the Landscape 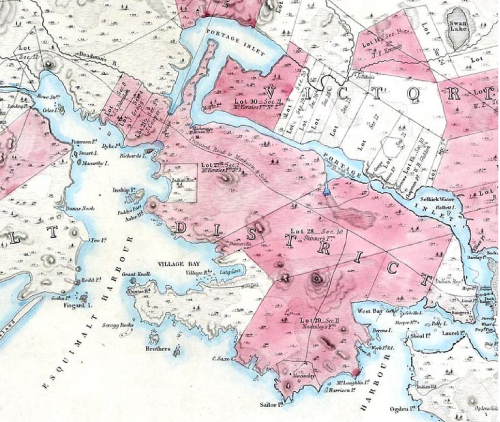 Figure 1. Viewfield Farm at Macaulay Point, in1854. The farm extended along the southern water front from Saxe Point in Esquimalt, to Lime Bay in Victoria West and across the peninsula to Selkirk Waters.

As Donald Macaulay with his Tsimshian wife Margaret and the first four of their six daughters Mary, Flora, Catherine and Sarah, gazed out at the beautiful ocean view and the fields draped with blue camas, he must have been reminded of his native home on the Scottish Isle of Lewis. It was 1850, and Macaulay was bailiff of the new 600-acre Viewfield Farm owned by the Puget Sound Agricultural Company.

Macaulay could hardly have known that this landscape would one day be named after him. Or that it would become a popular military camp in the late 1890’s, where Victoria’s citizens flocked to witness regimental demonstrations.

With the building of the military base and houses, the Macaulay Plains disappeared.  But a visit to Macaulay Point reveals the large defensive structures that were still being used in the Second World War.  Less visible are the three ancient archaeological sites in Fleming Bay.

Figure 2. In 1878, based on the belief of a threat from Russia, an Earthwork Battery was built at Fort Macaulay. Later, in 1887, the old earthworks were dismantled and new six-inch disappearing guns were installed. These were used during both world wars. (Robert Kidd photograph, 1959; RBCM, Archaeology Collection.). 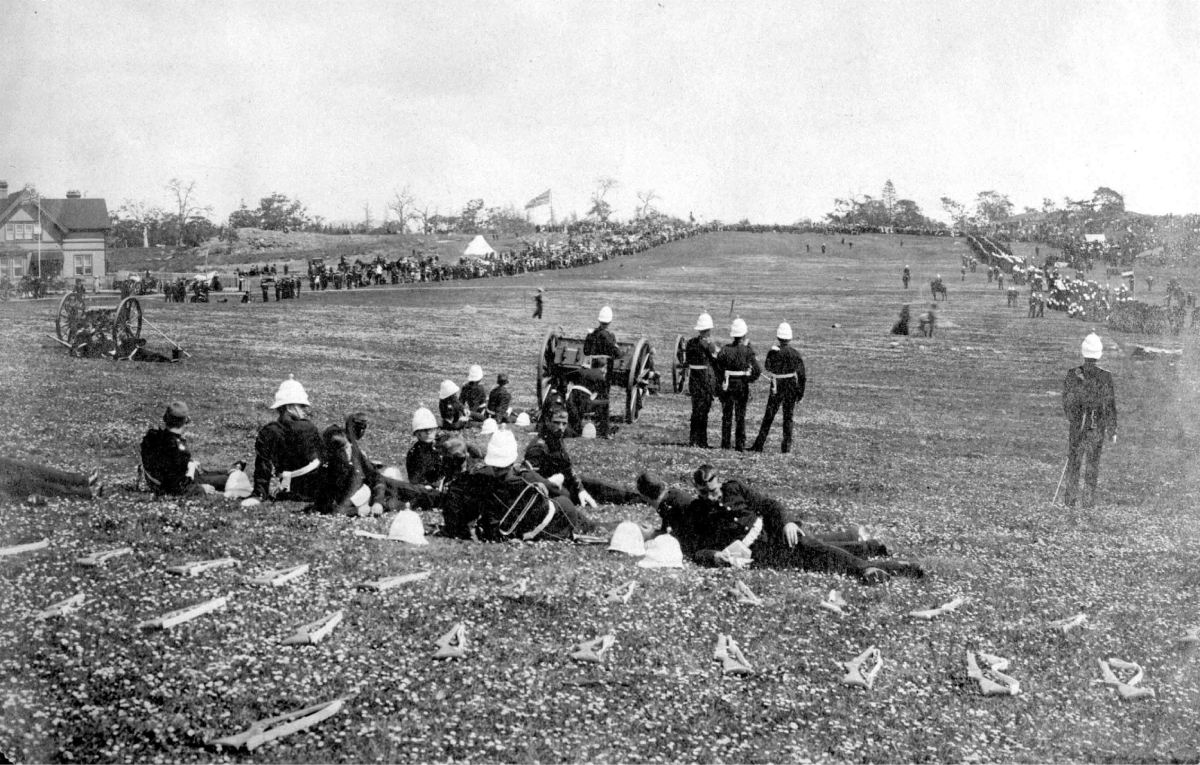 Figure 3. Crowds of people witnessed the performances of the British Columbia Provincial Regiment of Garrison Artillery on Macaulay Plains, about 1885. (RBCM A-03131).

Macaulay Point was known as Mukwuks by the Lekwungen First Nations on whose traditional territory it was located.  Today the Lekwungen are represented by the Esquimalt and Songees Nations. In 1952, Songhees elder Jimmy Fraser indicated that Mukwuks was once the location of a salmon reef net fishing station. The stone seen here in figure 4 is a net weight or anchor stone found by divers on Macaulay reef.

Divers also found piles of larger, unmodified rocks used as anchors on the reef net. Every year the kelp rope holding these anchors would be cut, and they would be left behind. This shaped rock would have been one that was retrieved after use, but in this case was probably accidentally lost. 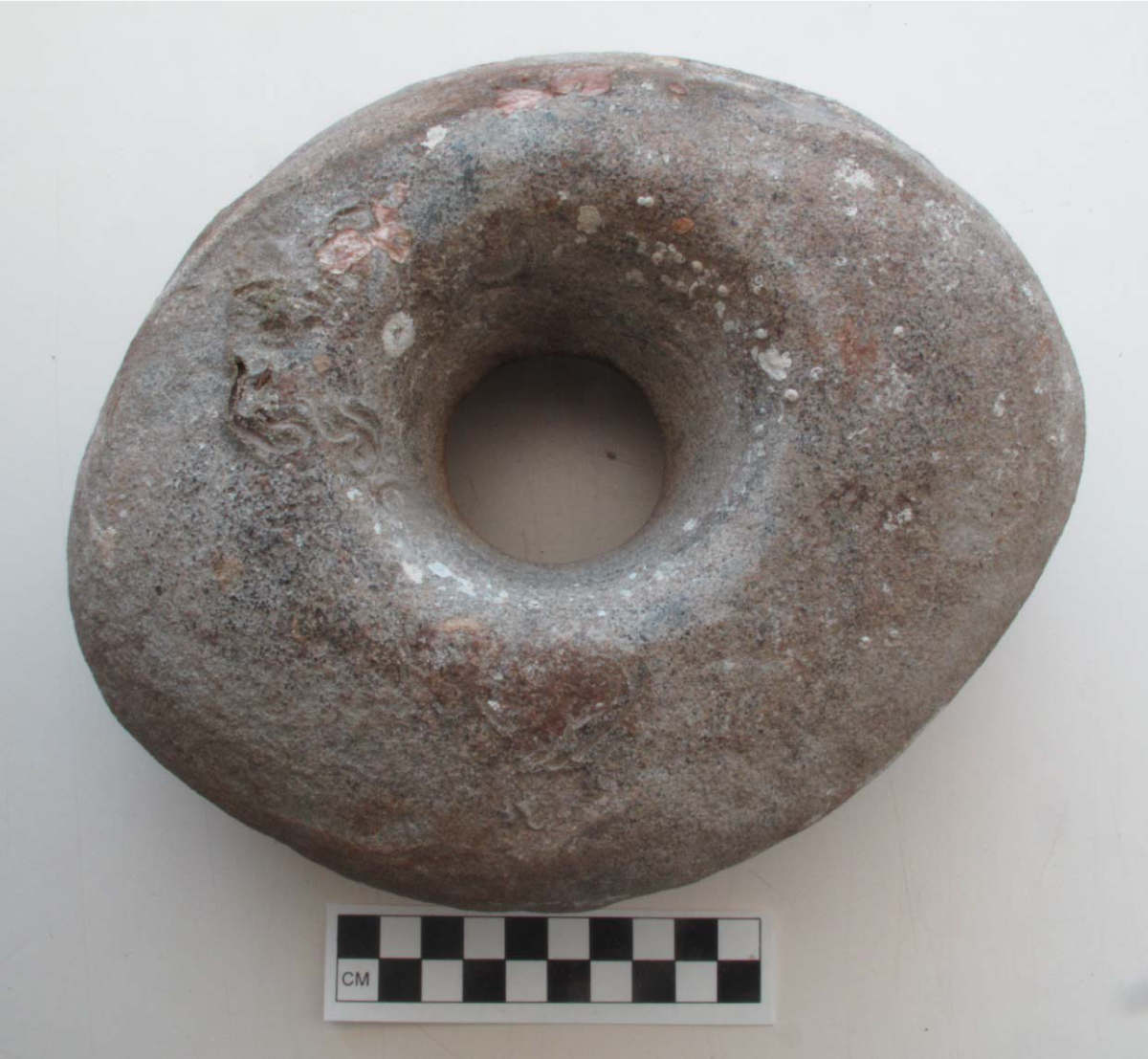 Figure 4. This shaped rock was used as a net sinker to hold a reef net down between two canoes. It weighs about 4 kg or 9 lbs (RBCM. DcRu-Y:96). 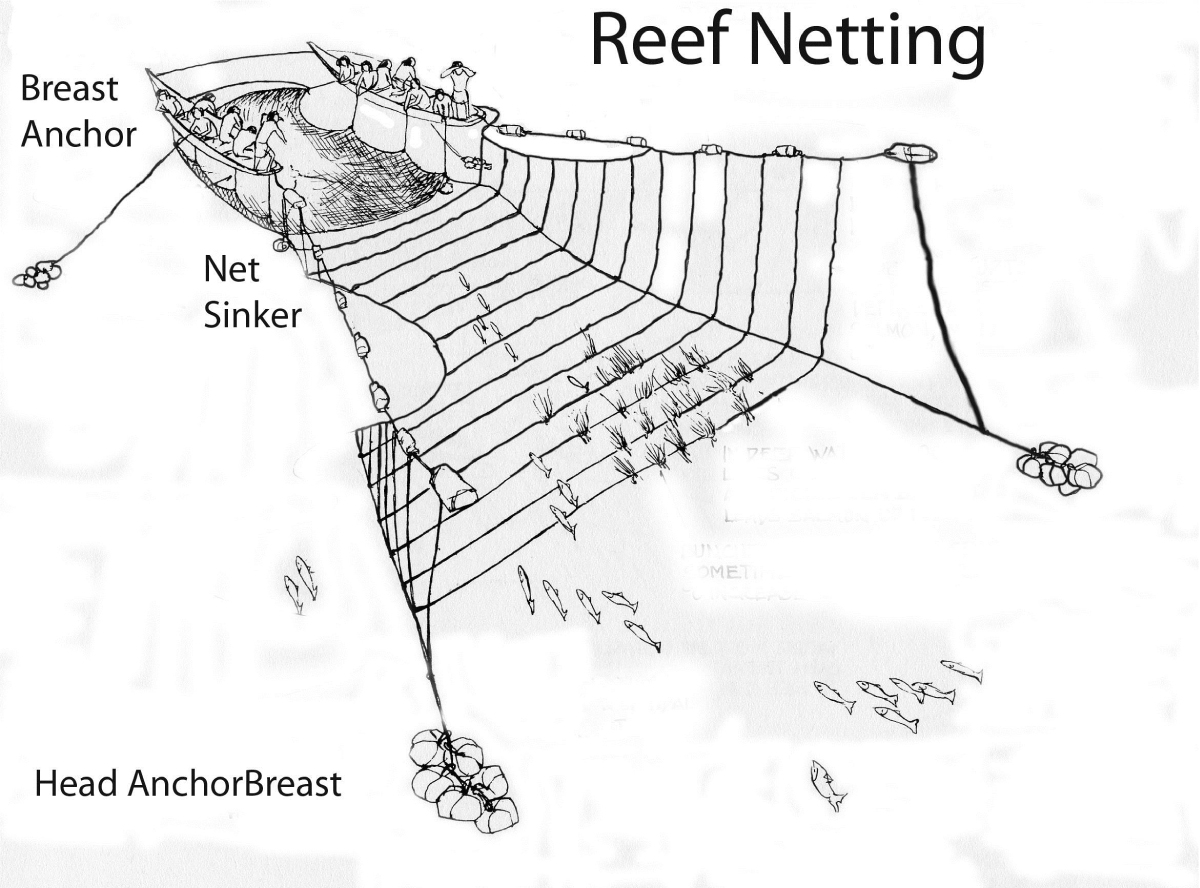 Figure 5. On reefs where the salmon came close to shore, this type of net was placed in a pathway cut into the kelp beds. When the fish were above the mesh net, it was pulled up by crews in boats on each side. (Re-drawn after Hilary Stewart 1977:94).

The oldest archaeological site in Esquimalt

Between about 5000 and 11,000 years ago, all of the many archaeological sites in bays around Esquimalt, were dry land. As the sea level rose to near its present height about 4,200 years ago, we find evidence of First Nations living at Fleming Bay.

A large shellmidden stretches across the back of the bay, containing shellfish remains, bones, artifacts and other evidence of past human behaviour. It is one of two equally old Archaeological sites in the municipality of Esquimalt. It dates to the same age as a shellmidden under the Tillicum Road Bridge. Much of the site has now been destroyed, but there are still portions intact.

The location was a camp, used at least on a seasonally basis, at various times starting 4200 years ago. On both ends of this large site were two later period shellmiddens identified as aboriginal defensive locations – used in times of warfare.

Defensive sites are often located on a raised peninsula with an intentionally dug trench across the back of the peninsula. The dirt was mounded up on the inside of the trench and wooden palisades placed in the inner rim of the trench.

This peninsula, extending out from the main shellmidden site was occupied at a later time period than the older deposits of the main site. This was a defensive location where about 800 to 1000 years ago a trench was dug across the back end of the peninsula. 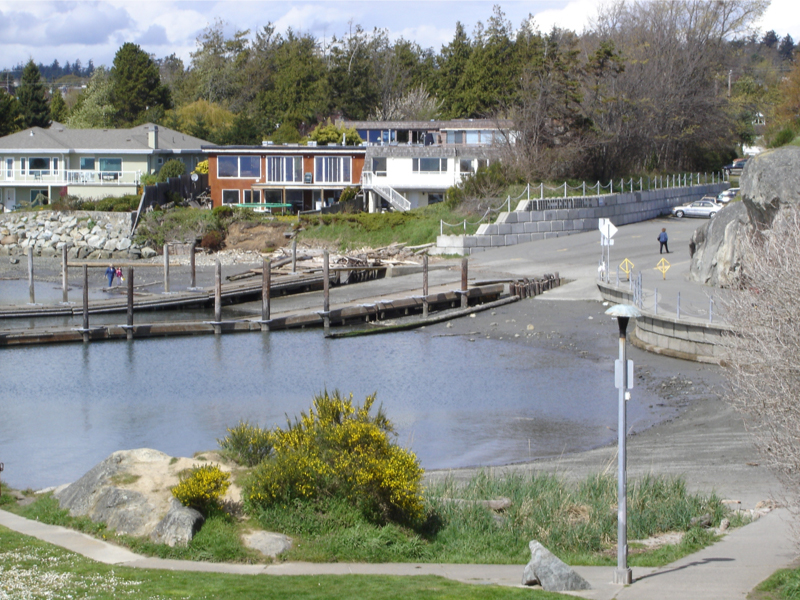 Figure 6. The ancient shellmidden at Fleming Beach once extended west from the high rocks on the east side of the Esquimalt Anglers Association boat ramp. Much of it has been destroyed by the boat ramp and housing development. The “Climbing Wall” is on the far right (Grant Keddie, 2006). 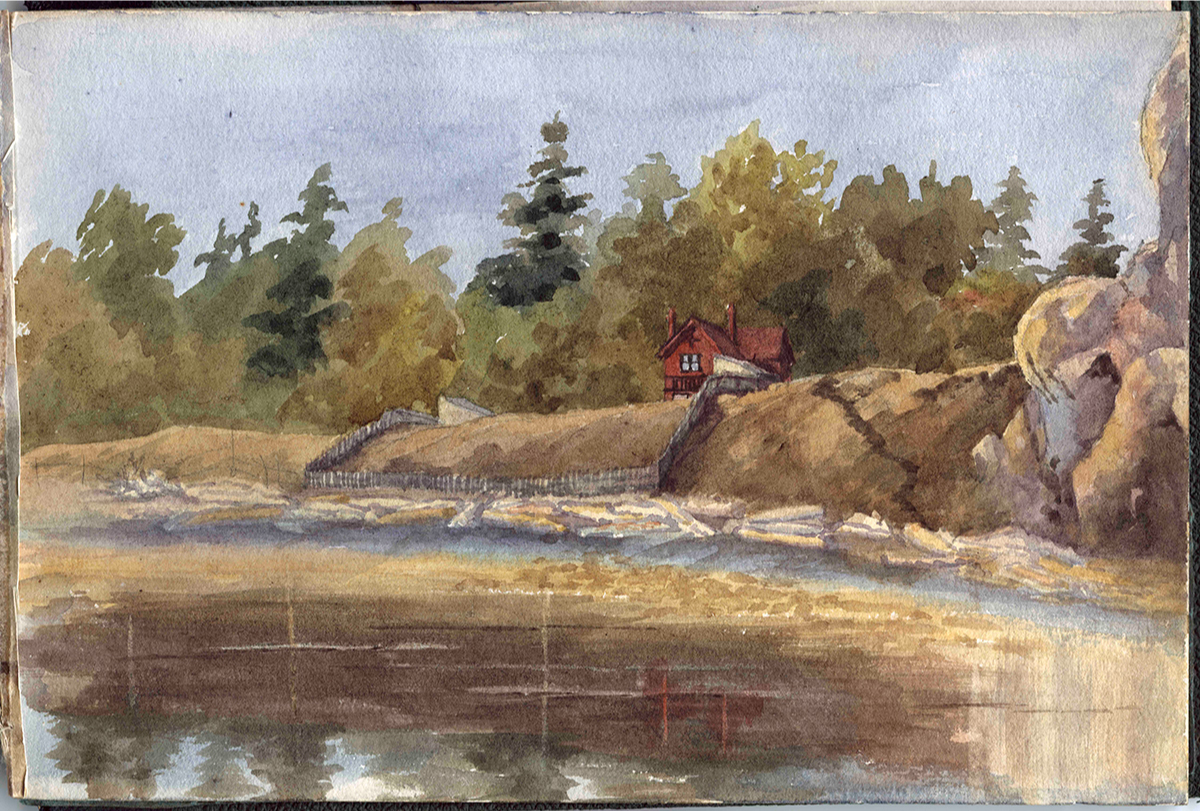 Figure 7. The beach is named after the family of photographers’ Harold and Edgar Fleming, who built their house, Viewfield, here in the 1880s. This 1896 painting shows the house above what is now the boat launch, before three metres of soil and shellmidden were removed. The rocks on the right are now a popular climbing wall. (RBCM; PDP4171).

The archaeological sites at Fleming Bay were known since the 1890s, but officially recorded by Robert Kidd for the Provincial Museum in 1959. He took a series of photographs at that time which allow us to see the recent changes that have occurred. 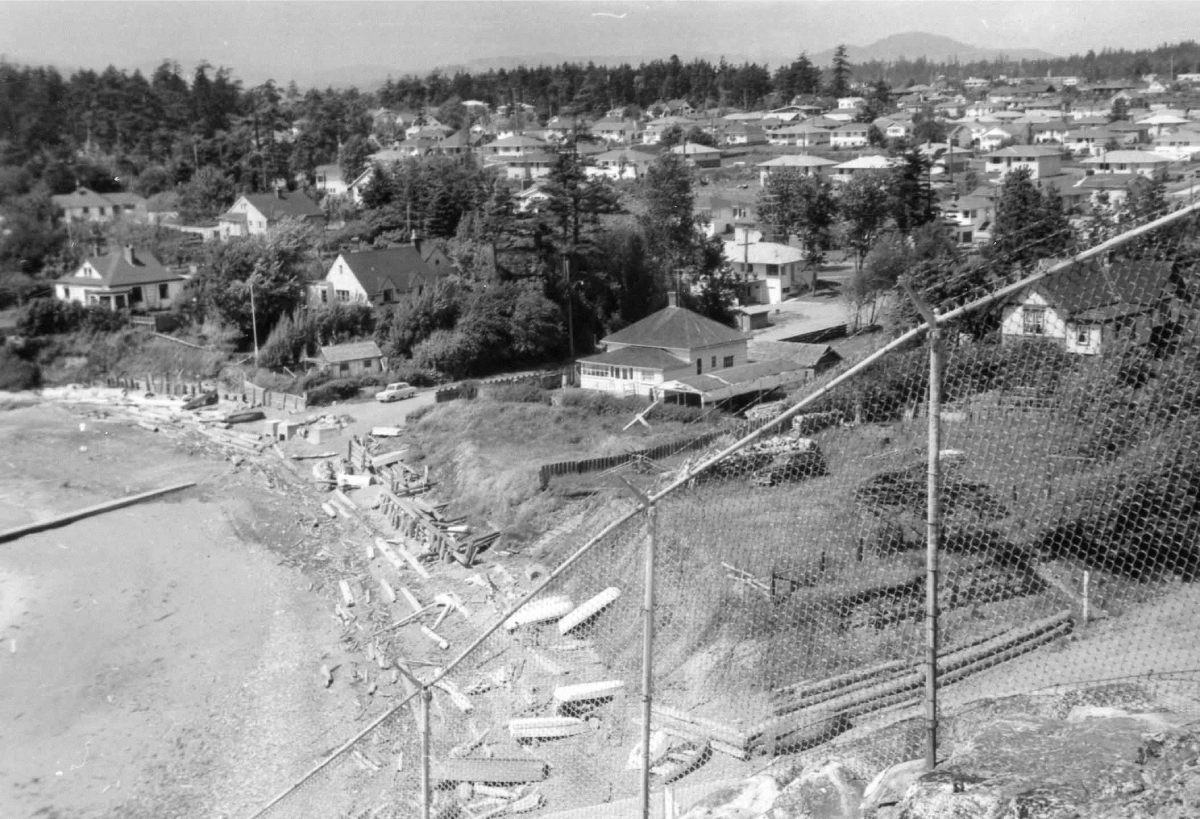 Figure 9. The raised shellmidden bank can be seen across the back of Fleming Beach. Kinver Road is on the far left and what is now the climbing wall on the far right ( Robert Kidd photograph. 1959. RBCM, Archaeology Collection). 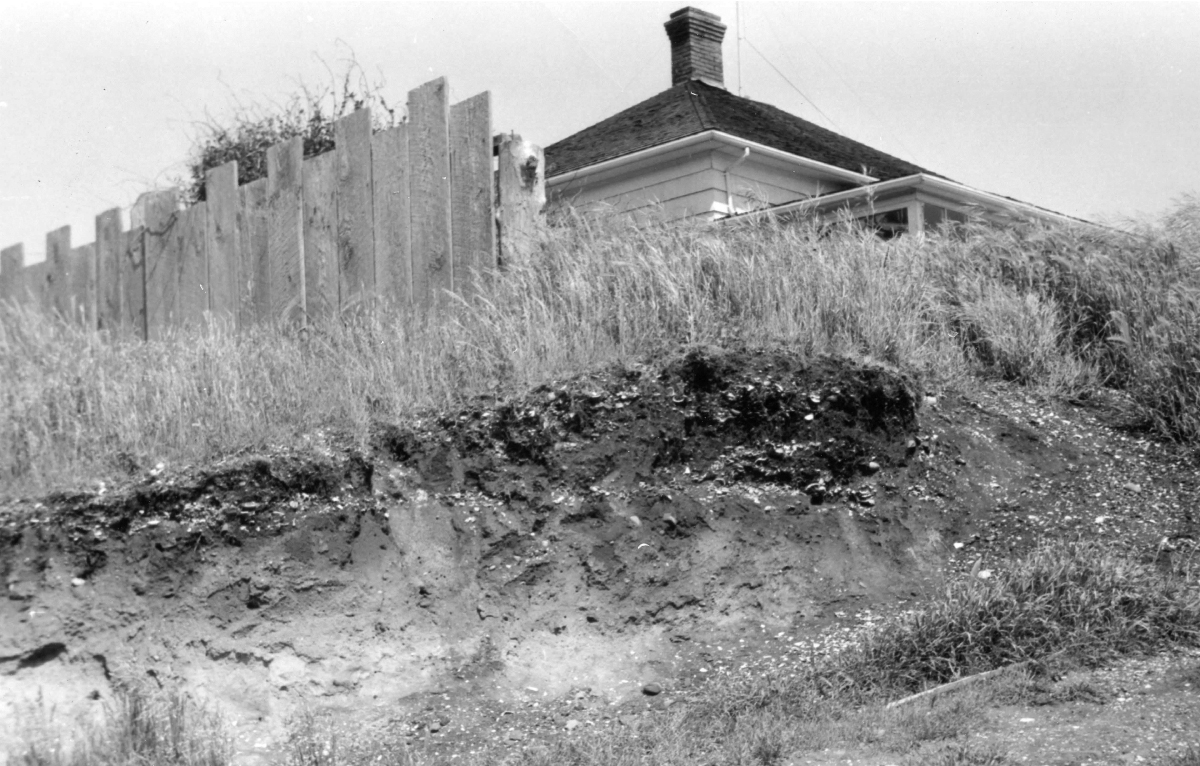 Figure 10. The cultural debris that made up the shellmidden at Fleming Beach was once up to two metres deep. (Robert Kidd photograph 1959. RBCM, Archaeology collection). 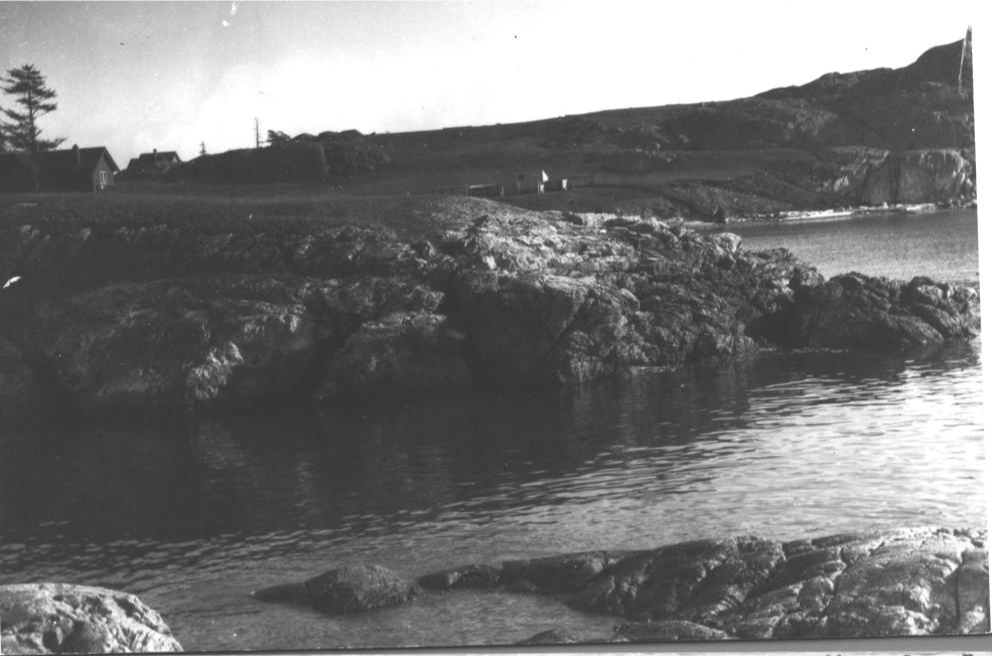 Figure 11. Looking across the aboriginal defensive site on the west side of the back of Fleming Beach, in 1901. The present day Esquimalt Angler’s Association ramp is on the distant right next to the exposed climbing Rock. (Charles Newcombe photograph; RBCM, Ethnology Collection, PN139). 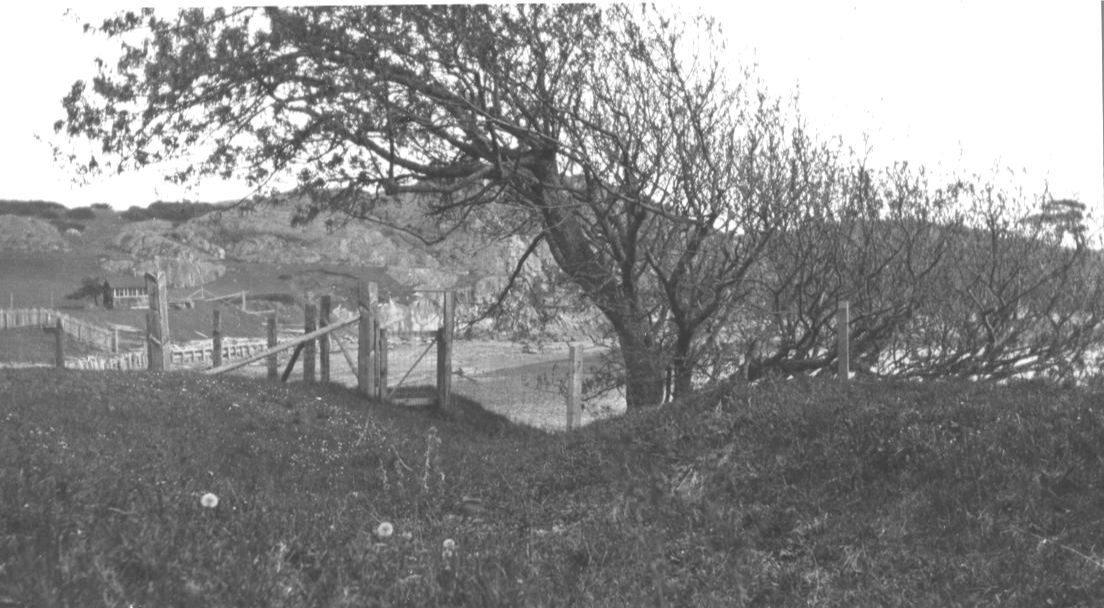 Figure 12. Remnants of a defensive trench that once cut across the back of the peninsula of the site, in 1928. The climbing wall can be seen at the centre of the photograph in the far background. (William Newcombe photograph; RBCM, Ethnology Collection, PN169). 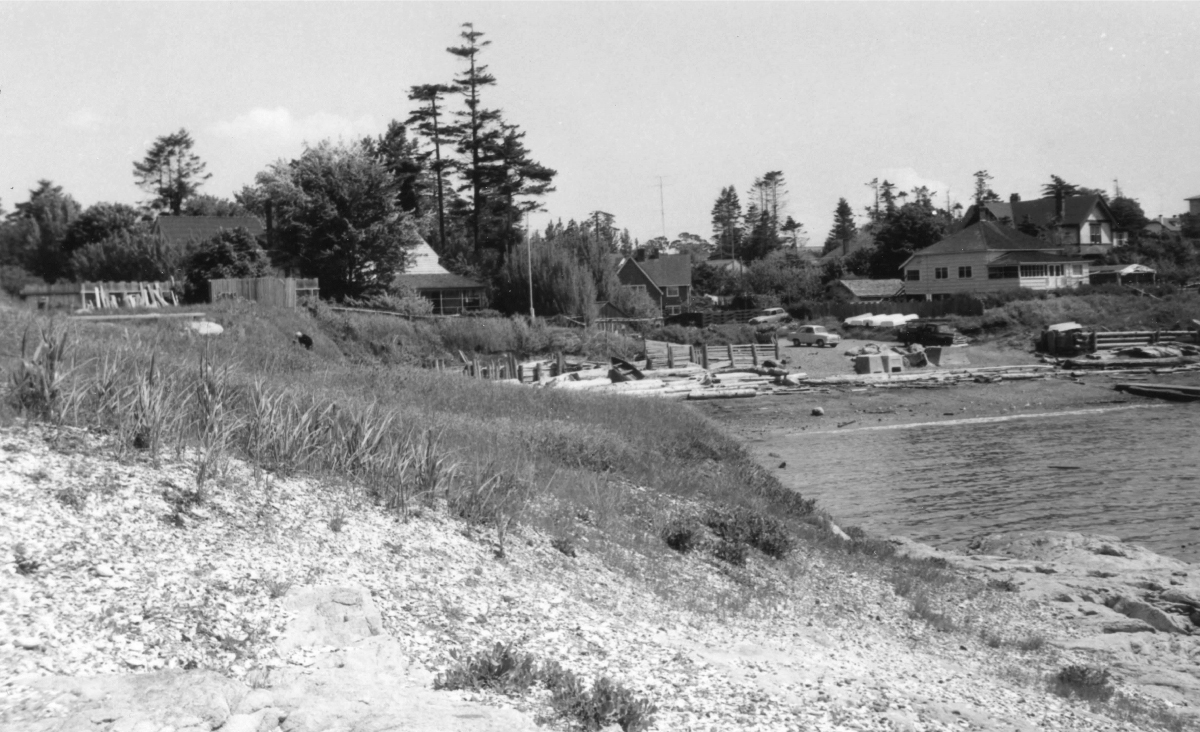 Figure 13. Looking across the south end of the defensive site seen in figures 11 and 12. Shellmidden can be seen eroding down the slope. (Robert Kidd photograph; RBCM, Archaeology Collection). 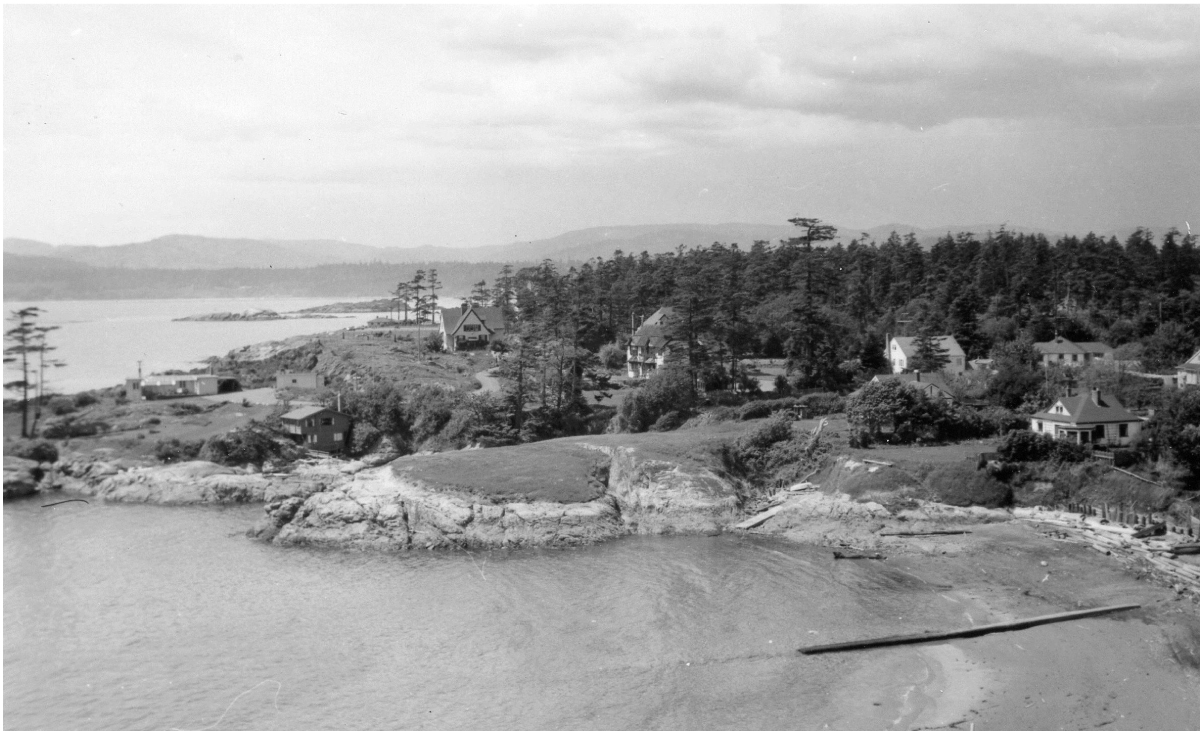 Figure 14. The Aboriginal defensive site on the west side of Fleming Bay is on the peninsula at the centre of the photograph (Robert Kidd photograph 1959; RBCM Archaeology collection). 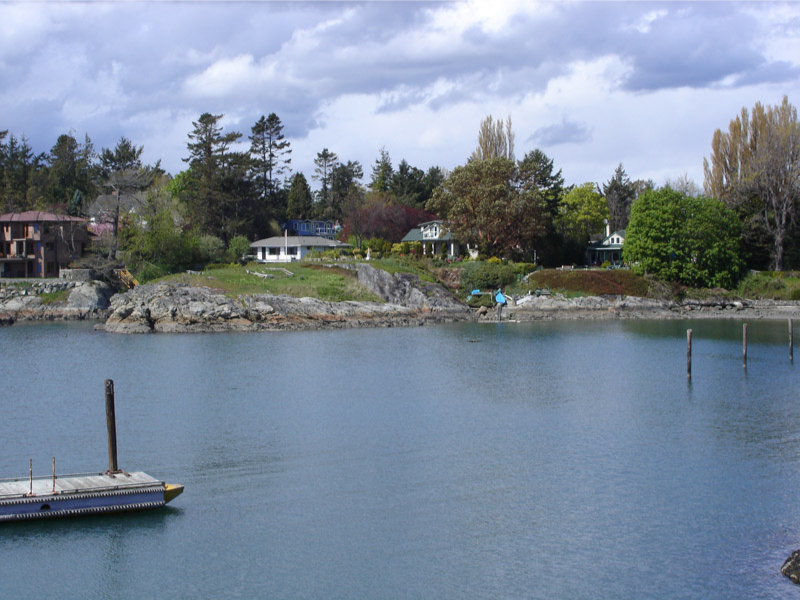 Figure 15. Looking across Fleming Bay to the Aboriginal defensive site at the left of the centre of the photograph, 2006. (Grant Keddie photograph). 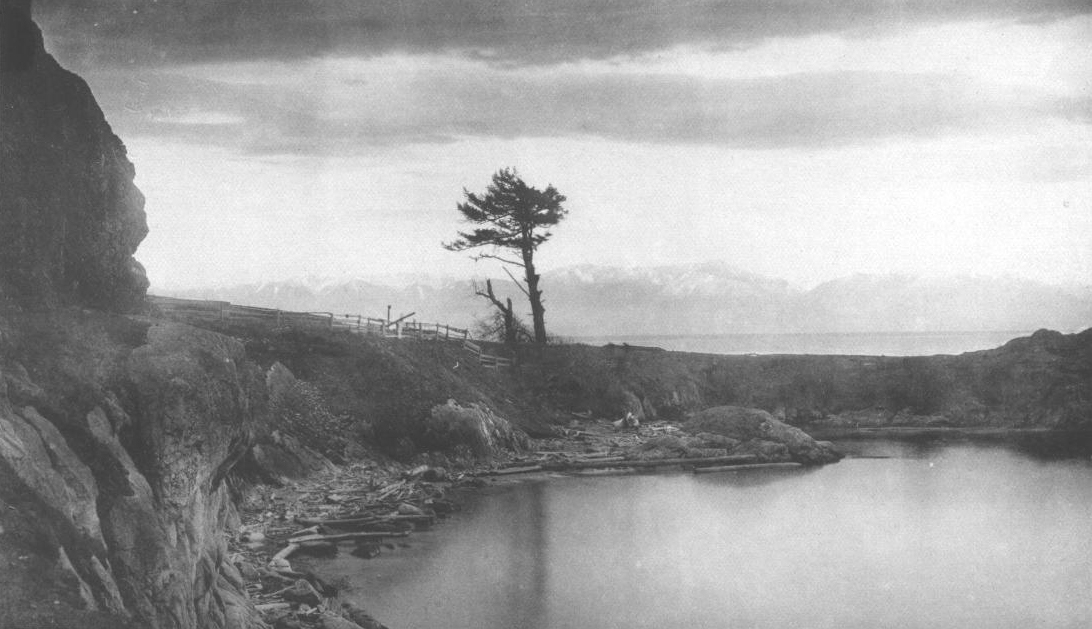 Figure 16. The location of the second defensive site on the south-western side of Fleming Beach, in 1900. Part of the area in the foreground has been filled in and now forms part of Buxton Green Park. Shellmidden deposits once occurred from the far right to what is now the climbing wall on the left. The photographer is unknown, but it was likely the professional photographer Edgar Fleming who lived at the beach. (Grant Keddie Collection). 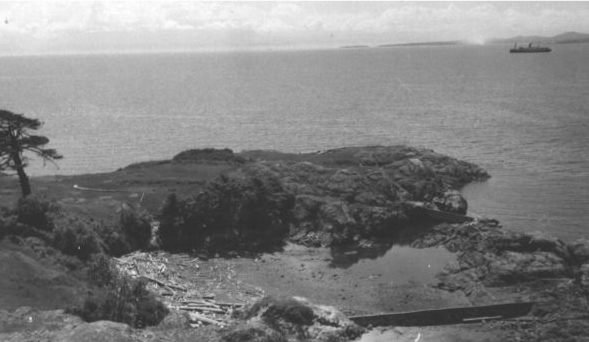 Figure 17. The southern aboriginal defensive site (DcRu-21) is seen in 1959 in relation to the peninsula before it was artificially extended in 1965. The stone wall in the foreground is part of the first salt water swimming pool built in greater Victoria. It was built by Canadian soldiers stationed at Work Point Barracks during the Second World War. It was filled in with the creation of Buxton Green Park in 1983 (Robert Kidd photograph; RBCM, Archaeology Collection).

Fleming Bay and Macaulay Point are home to one of the oldest First Nation habitations in the region and two types of defensive sites – one from a thousand years ago and one used from 1878 until World War II.

As you walk around the bay you will be able to observe these special features and think of the Macaulay family that walked here before you.

Taking knowledge of the community’s heritage features, the rock underneath your feet, the birds, the plants and the fish in the water below will make your stroll along the waterfront a much more enjoyable experience. It gives the community a sense of place.