On June 23, 2016, students from the University of Victoria’s department of Education partnered with our Learning Department at the Royal BC Museum for a gentle takeover of the museum galleries. The goal was to look critically at the existing galleries, and ask the questions ‘where do I fit in, and what can I actively do to make for a more inclusive space?’

Sarah Lazin, a Learning Program Facilitator at the Royal BC Museum, came along to see what was going on, and this is her report: A raggedy bear with no eyes. Two pairs of dancing shoes. A roll of hockey tape.

Items with no obvious value or relationship were carefully grouped together and labelled, resting upon tables that had been turned into makeshift museums. A group of fourth-year education students from UVic circled the displays, adjusting their exhibits and reading out the backstories crafted for each artifact.

They arrived at the museum, slightly confused by their instructions (or lack thereof). Each person had brought with them an item of personal significance – but why would a well-loved teddy bear be of importance to the provincial museum?

After spending time in the galleries, their task became clear. The students were to intervene in the museum’s way of storytelling by adding or taking away from the exhibits. They could use the items they brought to tell new stories, though they weren’t required to. Their interventions revolved around central questions that struck them during an exploration of the Human History floor.

“Where is the science section?” One group asked. “And where are the women?”

Another group noted the lack of music and of people.

“Where do immigrants fit in? Where do I fit in?”

The museum had long since closed to visitors; these questions reverberated throughout each room. The students broke into groups based on which of these questions resonated with them the most. They dispersed into the gallery, armed with empty photos frames, markers, and curiosity.

Some interventions were bold: one group donned suspenders and caps, and would perform tap and swing dance routines for visitors passing by – adding a human element to the gallery they felt was sorely needed. 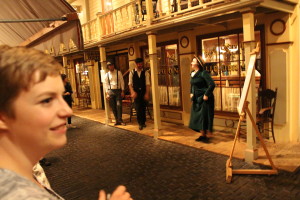 Others were subtle: one group decided to offer visitors a choice as to which photograph should replace an out-of-place piece of art. Another group hung photos of the LGBTQ community from each decade from 1900 to the present alongside that decade’s respective fashion display, fighting the systematic erasure of certain groups. 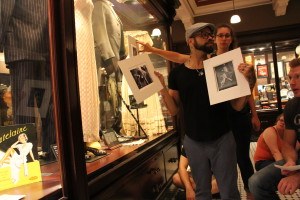 Theodore, the teddy bear, found himself left on the gallery floor, covered by a plexiglass case. The story of a migrant family, written in both English and Spanish, reminded visitors of the exhausting process of leaving everything behind in search of a new home, and everything that was lost or left behind in doing so. 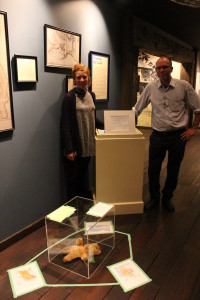 After working on their interventions well into the night, the students headed home. They returned early the next morning, to put the finishing touches on their projects and prepare themselves for the waves of approaching visitors.

The museum opened and so the students waited. Slowly at first, visitors trickled into the gallery, unaware that the students were listening to their conversations and gauging their reactions to the interventions.

Some stood to facilitate their projects: one group dressed as scientists and challenged preconceived notions of gender and ‘appropriate’ work in decades gone by. This group, among others, asked questions to visitors, explaining why they were in the museum and gathering feedback directly. 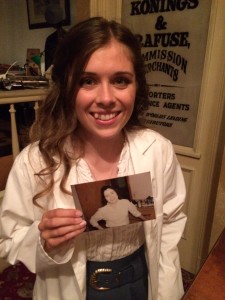 Other interventions stood alone, posing questions for visitors to think about as they wandered through the gallery. 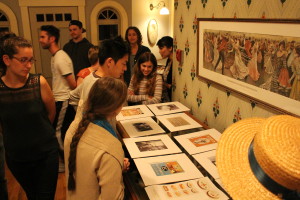 At 11am, the interventions quietly disappeared. Suspenders and caps were removed, photographs were taken down.  The soon-to-be educators left the museum as they had found it, chatting to each other about unconventional storytelling, disrupting hegemonic accounts of the past, and the value of alternative educational spaces.