What Happened to the Mega Fauna? 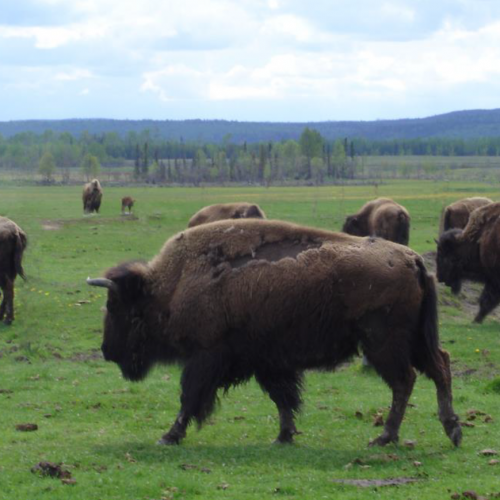 This was a likely scene around Victoria, British Columbia for a 300 year period between 11,700 and 10,900 years ago when an open parkland environment provided habitat for herds of bison. A subsequent cold period saw their disappearance from Vancouver Island.Grant Keddie photo.

Large animals, such as mammoths, mastodons, horses and camels that roamed North America near the end of the ice age are referred to as mega-fauna. Why these large animals went extinct has been widely debated but answers are beginning to emerge.

New information is showing the answer is more complex than previously thought. Both climate change and human hunting play a role at different times in different places.

This was a likely scene around Victoria, British Columbia for a 300 year period between 11,700 and 10,900 years ago when an open parkland environment provided habitat for herds of bison. A subsequent cold period saw their disappearance from Vancouver Island.

Expanding and Shrinking – Habitat and Genes

Before the appearance of humans on the northern landscapes we see that ecosystem stability for animal species generally persisted over long periods of time. During repeated sudden climate changes over the last few hundred thousand years of the Pleistocene (2.6 million to 11,700 years ago) animal populations had the ability to disperse across the landscape to shrinking refugia during harsh times and expand back to increasingly more favourable habits during good times. During cold periods, when the sea level was lower by as much as 150 meters, the Beringian continent was as wide as the Canadian Prairies.

The evidence for shrinking environments is seen in the reduction of genetic diversity in large animals such as mammoth, mastodon and bison. Grass loving animals of the far north were displaced with the expansion of boreal forests during the onset of warm periods. Boreal forest loving mastodons disappeared 70,000 years ago from large regions of the north with the advance of colder climates and the return of an open tundra environment. By the time humans appeared on the scene mastodons only lived much further to the south.

Humans likely interrupted the ability of mega-fauna sub-groups from connecting with each other. This would be especially true if humans were concentrated on regular migration routes between or living on resource rich areas used by the animals. The concentration of large game animals in smaller regions would make them more susceptible to predation from carnivores and humans.

Some mammal species whose ranges straddled the length of Beringia became extinct on one continent, but not the other, with the rise of sea level at the end of the Pleistocene. Examples are the horse (Equus caballus) and Saiga antelope (saiga tatarica) that survived only on what became the Old World side of the Bering Strait.

Humans co-existed for several thousand years in eastern Beringia – the area now including Alaska and the Yukon. During this time mammoths and horses disappeared but muskox, bison and caribou survived.

Further south large animals were faced with rapid environmental change and increasing human and carnivore predation. In the American Southwest mammoths experienced a warm and dry climate that would have made their seasonal movements more predictable and more vulnerable to predation. Large scale predation of mammoths and mastodons is often associated with a culture called Clovis that was only around for a short time period of 300 years from 13,200 to 12,900 years ago. The Clovis culture is recognized by distinct types of spear points. Other cultures before and after the Clovis culture also hunted mammoths, but our knowledge of these cultures is still developing.

The megafauna diversity of North America and Eurasia was considerably reduced around the time of the transition from the ice age to the more recent Holocene period after 11,700 years ago. By this time the woolly mammoth (Mammuthus primigenius) became extinct in many regions in both North American and the Eurasian continent. The last mammoth survivors on Wrangle Island northwest of the Bering Strait disappeared only 3700 years ago when we see the first evidence of human occupation of the Island.