“Don’t let it loose.” That is the message to all pet shops in the province. Shoppers should see the logo that the Inter-Ministry Invasive Species Working Group (IMISWG) asked pet shops to display: 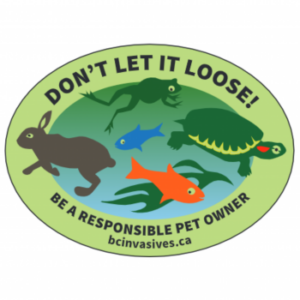 But clearly this message is not getting through.

A blue-eyed panaque was caught in a ditch leading to Shawnigan Lake.

A pacu was caught in Green Lake, Nanaimo.

An albino oscar was caught in Chemainus. 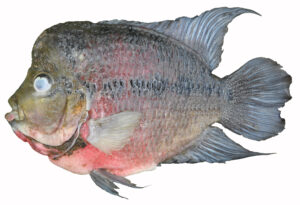 A flowerhorn cichlid was found in Kelowna. Flowerhorns are a man-made hybrid and do not exist in the wild.

Goldfish and rosy-red (fathead) minnows appear in BC with alarming regularity.
All of these abandoned animals originated in the pet trade. 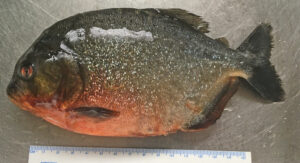 And in 2019, two redbelly piranhas (above, the caught in September; below, the one caught in July) were found in Westwood Lake in Nanaimo. This is a South American species with a famous reputation, exaggerated by several really bad B-movies. 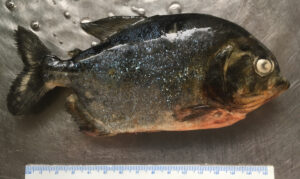 Piranha also may have been released in Langford Lake—a fish enthusiast who routinely dumped his piranha when they grew too large was reported by a friend. We are fortunate that piranhas won’t survive our winters and that most BC lakes are too cold to sustain them even in summer. However, it does show the frequency with which pets get dumped, and you have to wonder what motivates people to abandon pets, especially pets that are potentially harmful to the environment (and in this case, to people).

According to Fuller et al. (1999), the native range of the redbelly piranha is lowland central and southern South America east of the Andes, including the Amazon and Parana basins and the coastal drainages of Brazil and Guianas. In North America, the species has been found in Florida, Hawai’i, Massachusetts, Michigan, Minnesota, Ohio, Oklahoma, Pennsylvania, Texas and Virginia. You can bet all of these are aquarium releases. Individual white piranha (S. rhombeus) also have been released in Florida, and a sinkhole pool at a Florida tourist attraction was stocked intentionally in the 1960s. The pool supported a population for about 14 years before state officials used rotenone to wipe them out. Other piranha, which were not identified, have appeared in California, Connecticut, Florida, Idaho, Illinois, Iowa, Kentucky, Missouri, New Hampshire, New York, Oklahoma, Pennsylvania, Utah and Washington.

I don’t think we have a synopsis of records in Canada, but I know pacu and silver dollars—relatives of the piranha—have appeared in Manitoba and Ontario, so who knows how many piranha have also been dumped in this country.

If you don’t want a fish, take it back to a pet shop, find it a new home, or if you have to, have it euthanized humanely. Our waterways are cool to cold, and it is unfair to make tropical fish suffer in cold water. And released tropical fish present a disease risk to our native fishes. Don’t release pets. BC becomes less beautiful with every abandoned animal (and aquarium plant—but that is another story entirely).