In 2017, the BC Archives acquired an Emily Carr watercolour of a woodland scene (PDP10276, Fig. 1). The work is an example of Carr’s early interest in the landscape of British Columbia. Recently, the work made its way back to the Paper Conservation Lab to receive the treatment that was recommended at the time of acquisition.

When this work arrived at the Royal BC Museum,  a few condition issues  were apparent.  There was some evidence of fading, a small stain in the upper left corner and some microscopic cracking of the paint layer (Fig. 2), but these issues are irreversible and— now that the painting is entering a stable, museum storage environment—not particularly worrying.  There was, however, one big (and unsightly) problem: the painting had been adhered to a low-quality, acidic cardboard support at some point in its history, and that support layer had been partially torn away (Fig. 3). 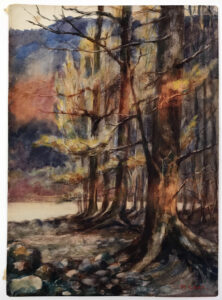 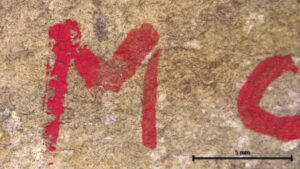 Figure 2. Micrograph of cracking in paint film over the artist’s signature (before treatment). 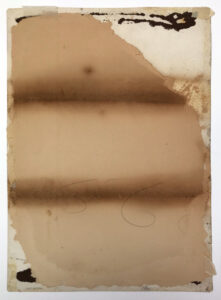 Figure 3. Back in reflected light (before treatment).

Why is this a big problem?

The solution was clear: this partial backing had to be fully removed.

Removal of a backing usually happens in stages. The backing board attached to this painting was rigid and thick. Trying to remove something thick from something thinner all at once will usually result in tears, delamination and/or creasing in the thinner, more flexible object—in this case, the painting. To avoid this, the thick backing is removed in thin layers. The backing is reduced, layer by layer, until we reach the final layer, which is attached to the painting. This final layer is the one carrying the adhesive, which makes it the trickiest layer to remove and the layer that needs to be removed most delicately.

The initial layers were removed using a thin, slightly dull blade. Upon reaching the final layers, it was apparent that there were many areas, particularly towards the outer edges, that were not directly adhered to the back of the painting. These areas lifted up easily without the blade.

The remaining, adhered portion was tested with a small amount of distilled water under the microscope and fortunately, the adhesive was discovered to be water-soluble. To be sure that the application of water on the back would not solubilize the media on the front, the media on the front was tested under the microscope with small drops of water (Fig 4). Each different colour was tested in discrete areas. Fortunately, only one colour was partially affected by the water. Given the thickness of the paper and the sensitivity level of the paint, it seemed unlikely that the water used for the backing removal would cause damage, and therefore a small, controlled application of water, administered under the microscope, was used to remove the final layer of the backing.

Following the backing removal, a small tear along the left side of the work became unsupported and therefore, unstable. To prevent this tear from growing bigger, it was repaired by pasting a thin piece of Japanese tissue over the tear on the back (Fig 5). The Japanese tissue is made of long natural fibres, which makes it very strong and supportive, despite how thin and translucent it appears after application. 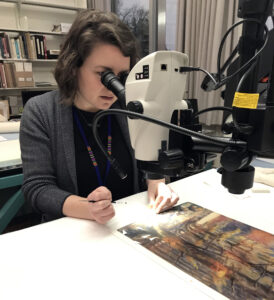 Figure 4. Paper conservator Lauren Buttle carrying out solubility testing under the microscope. Paper triangles are used to identify areas tested. These areas are recorded in the condition report. 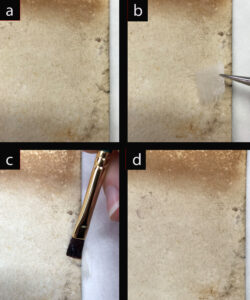 Figure 5. a) detail of the tear along the right side of the back in reflected light before repair; b) pasted out Japanese tissue being applied over tear with tweezers; c) a damp brush being used to smooth the repair tissue out over the tear; d) tear after repair.

Now that the work is physically and chemically stable, it is ready to be mounted so that it can be made accessible for research and exhibit (Figs. 6 and 7). Once the work is matted and framed, the change from “before” to “after” won’t be detectable to most viewers, but this work is essential for the long-term stability of the painting. It is an invisible gift that this generation bequeaths to the next. 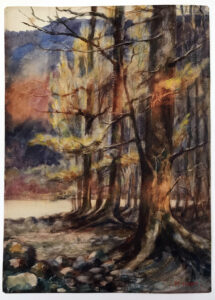 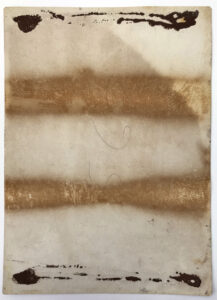