The Haida were among the many Indigenous northern visitors to Victoria after 1853. Many came to work to get trade goods or wages to purchase European commodities. The Haida visitors brought carvings they made on Haida Gwaii. Many of these were made of argillite, a stone unique to Haida Gwaii (see appendix 1, What is Argillite). Argillite was used primarily after 1810, there are only a few examples of argillite being used for labrets in ancient times (Keddie 1981).

Argillite plates, platters, mugs, goblets, knives and forks became popular as the Haida copied the European-style tableware used by the settlers. The citizens of Fort Victoria enthusiastically purchased these.

On July 21, 1859 the Victoria Gazette reports that the Haida “brought with them a large number of curiosities in the shape of carvings on wood and slate {argillite], and ingenious plaited works in straw, etc. A carving on wood of a steamship, displays great ingenuity, …It is supposed to be designed from a Russian steamer, which occasionally visits the island to trade, and of which the Indians have before brought reports. The carving is about nine inches long and four thick, and is out of a piece of solid oak, with pieces of bone for the masts, bowsprit, guards and fancy work on the sides. On the bow is carved in the wood the double-headed Russian eagle, with Crowns of bone; the carving is very good.”

The paper goes on to describe the moving parts on this artifact which “is intended as an ornament pipe, the smoke stack being the bowl”. The paper describes an argillite plate with an image of the San Francisco Herald carved on the inside. 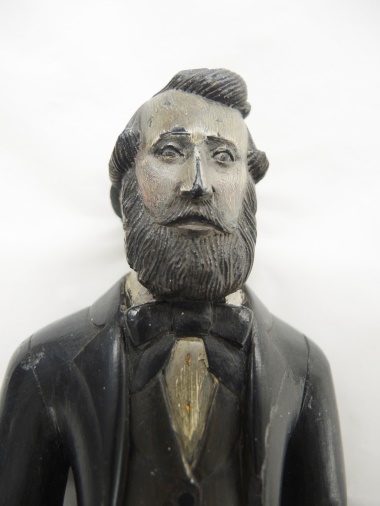 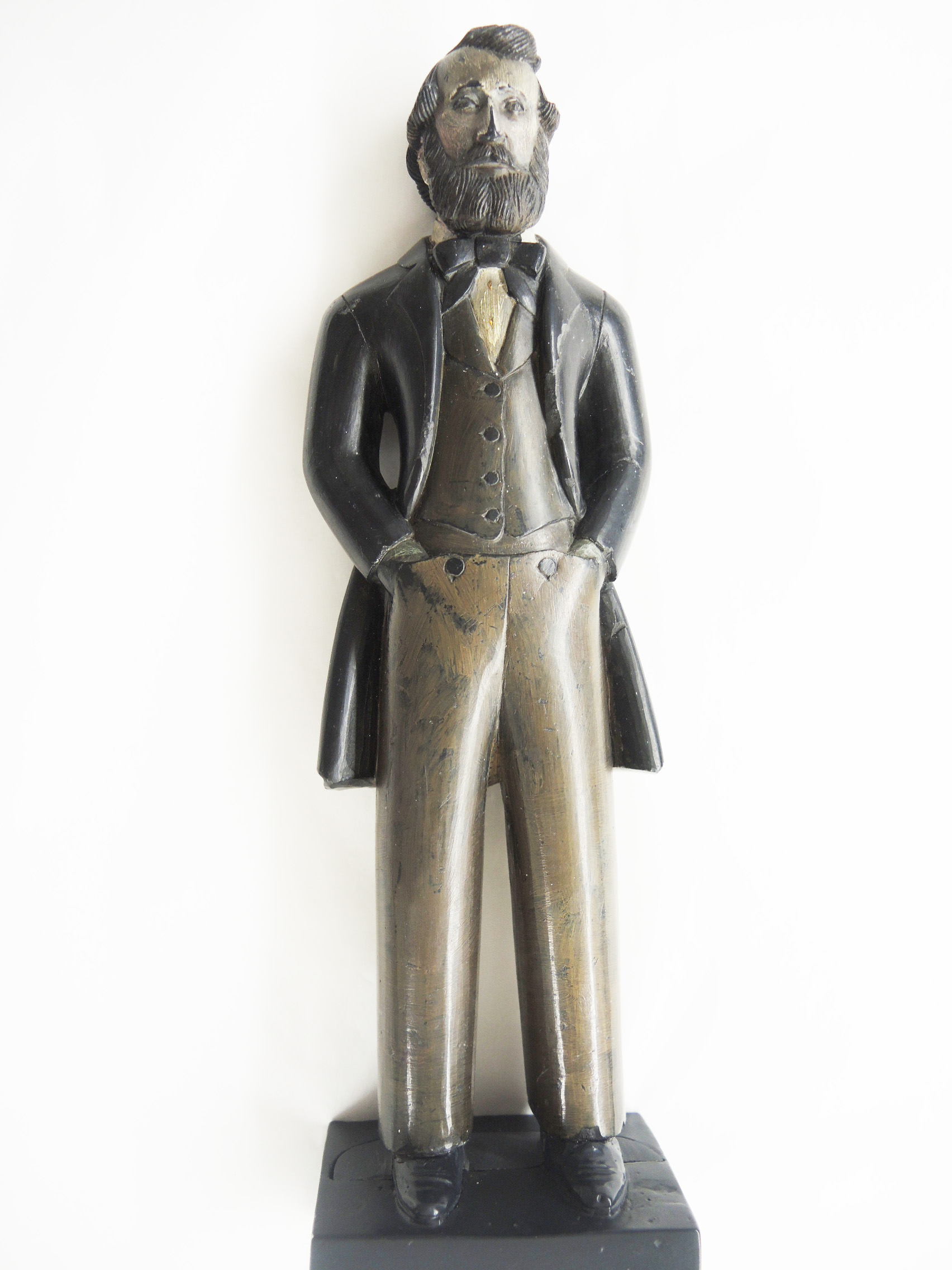 Figure 1 and 1a. Argillite carving of what is probably Dr. John Sebastian Helmcken. 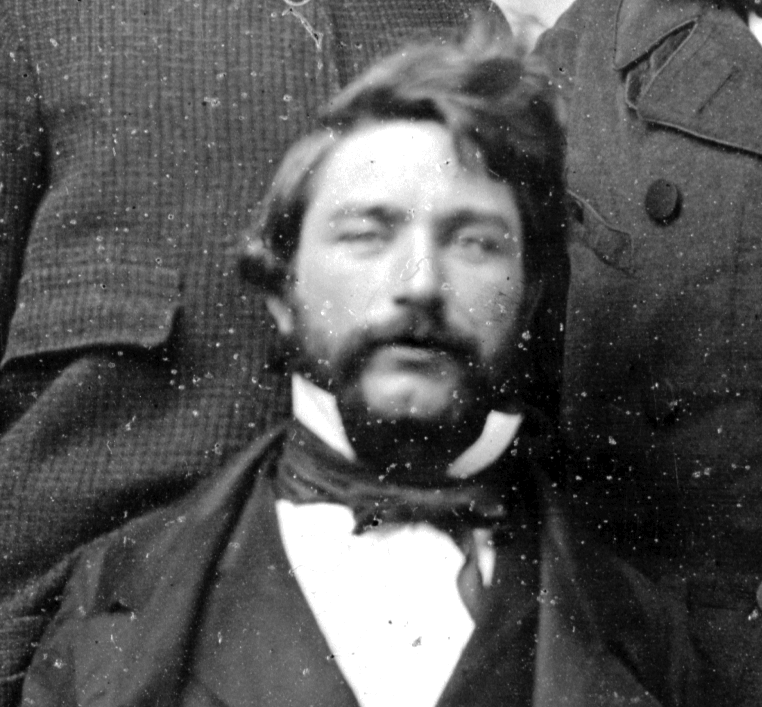 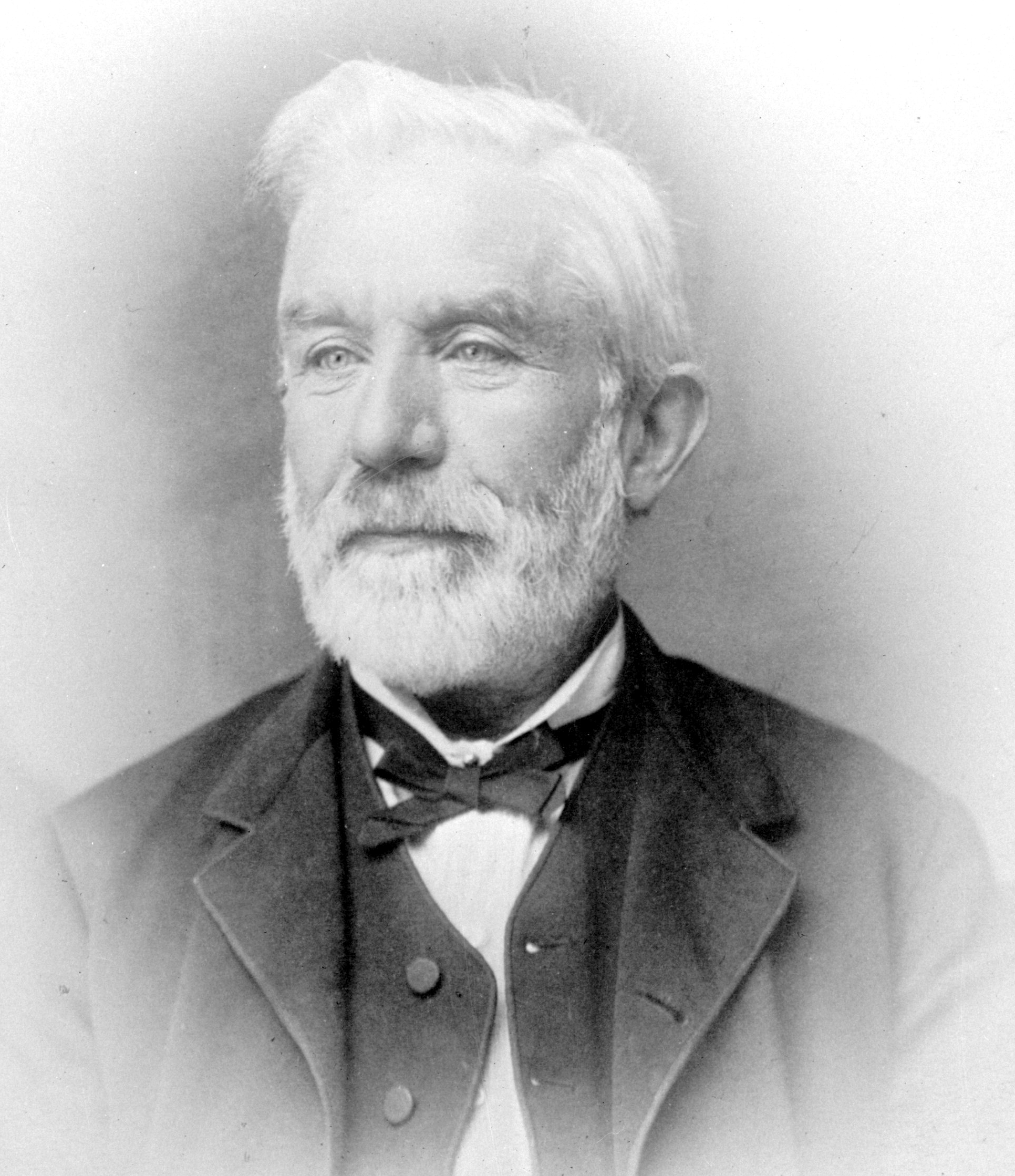 Figure 2 and 2a. Two photographs show Helmcken about 1859 and in later years.

Although the Haida brought carvings with them to Victoria, they also made them while staying in Victoria and left behind the waste material from their manufacture. Some Haida argillite carvers were known to take consignments to carve figures to resemble known people, such as that in figure 1. There is no document saying who this figure represents.

I would suggest that this figure is intended to be a characterization of Dr. John Sebastion Helmcken. Helmcken had a distinct flop of hair on one side of the top of his head and always wore a ribbon-like bow tie and a buttoned vest under a formal jacket – like that of the carving. The early photographs of Helmcken resemble the carved figure. In his later years his flop of hair was on his right side, but in early photographs it was, like that on the argillite figure, on the left side. Figure 2 shows the young Helmcken about 1859 and figure 2a shows him in later years.

The Haida often stayed in the Victoria region for long periods of time, acquiring goods and money by working on the local farms clearing land and assisting in building roads (Keddie 2003). A number of Haida worked on the Craigflower farm after 1853. This may be the source of the broken pieces of argillite found in the refuse from the farm. The Haida visitors to Victoria initially camped in the Rock Bay area but were assigned a temporary place on the south end of the Old Songhees reserve for which they were to pay rent for its use. The waste material from argillite carving has been found at the latter location. 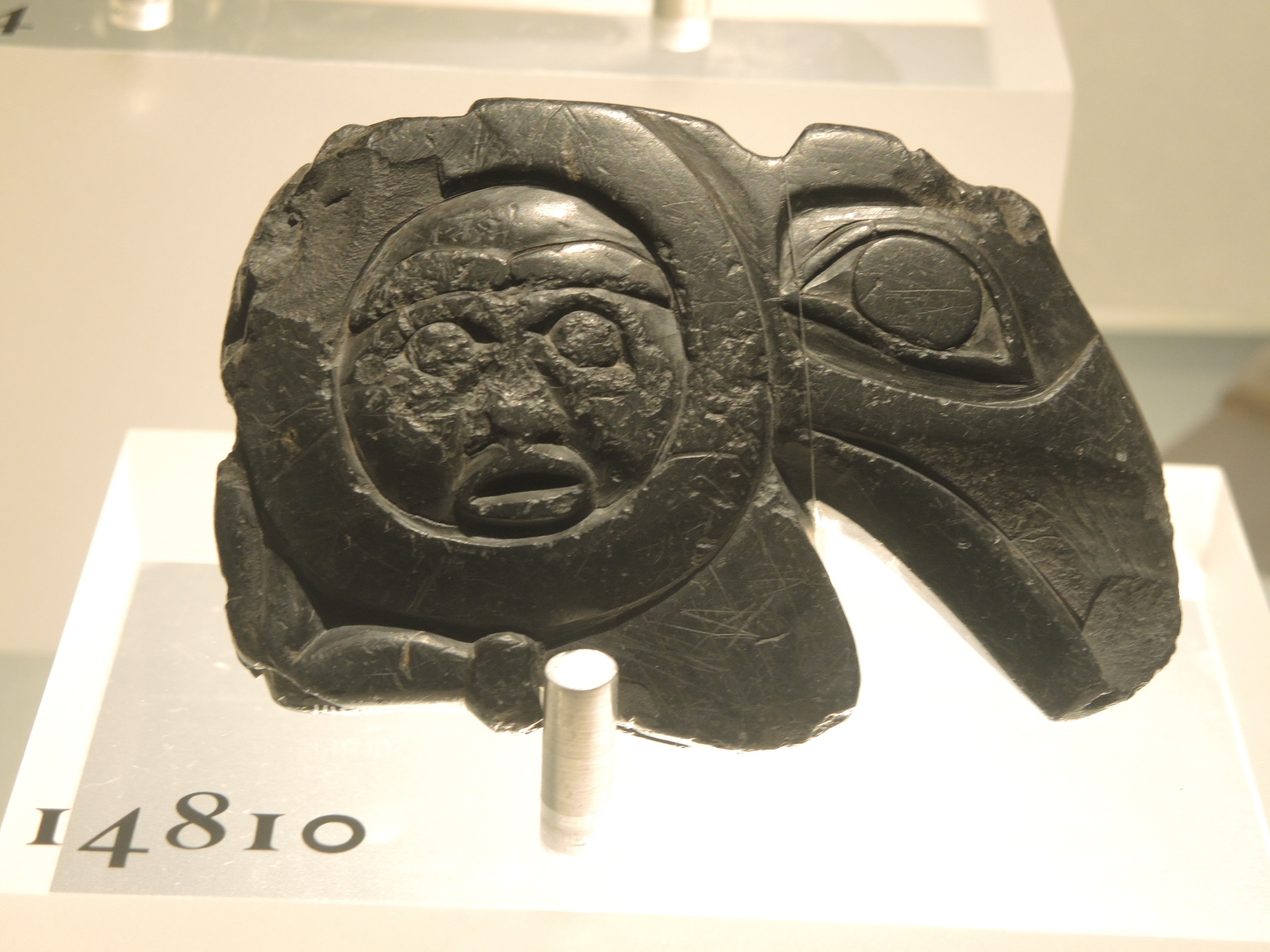 Figure 3. At top is the broken argillite pipe from Haida Gwaai (after Fladmark 1973). Figure 3a shows a similar style broken pipe (RBCM14810).

When excavating an early 19th Century Haida House at the Richardson Ranch site on Haida Gwaii, Knut Fladmark uncovered an early style broken argillite pipe (fig.3). This is similar to an example in the Royal B.C. Museum collection, RBCM14810 (fig. 3a). No provenience was recorded for this figure, but it matches the description of a pipe in the old Tolmie collection that is recorded as being found on the Old Songhees reserve.

The Haida did not take up smoking tobacco in pipes until it was introduced by Europeans. They did grow tobacco but mixed it with burnt abalone shell and sucked on a ball of it placed under their lip (Keddie 2016).

Other archaeological work in the 1970s resulted in the detailed examination of argillite fragments from the historic Village of Kiusta on Haida Gwaai (Gessler and Gessler 1976). These are similar to some of the plate fragments found in Victoria and to the complete plates found in the Royal B.C. Museum Indigenous collections.

Fragments of worked argillite and unfinished artifacts, broken during manufacture, were found on the southern end of the Old Songhees Reserve (Archaeological site DcRu-25) on the west side of the inner most portion of Victoria harbour.

During the massive alterations to the landscape in this area in the 1980s, Museum associate Tom Bown and the author found several pieces of argillite in the old area of the Haida camp and Tom Bown reported that another person (private collection) had found a cluster of argillite manufacturing waste on the south slope of the Hill behind the latter area.

Recent excavations by I. R. Wilson and Golder consultants recovered argillite pieces in the same general area west of Songhees Point. All of this material was recovered from deposits highly disturbed by previous industrial developments and all were mixed with European manufactured goods. 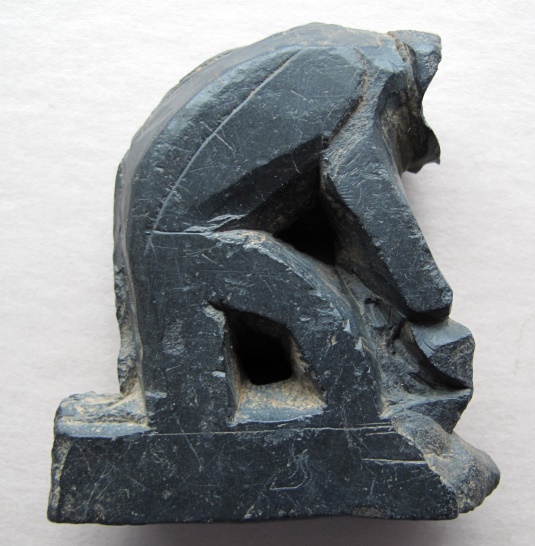 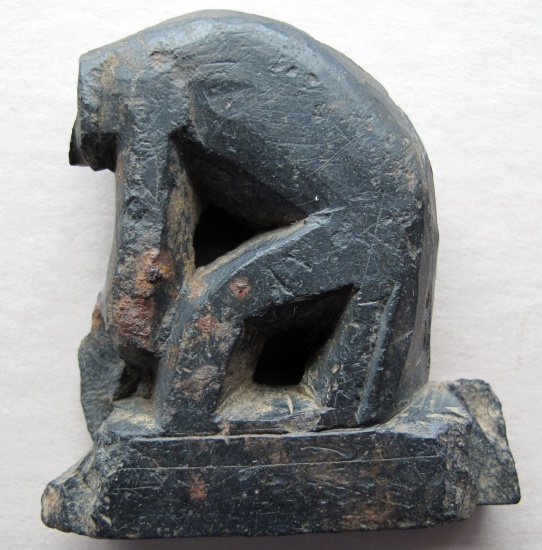 Figure 4. Both sides of an unfinished and broken human figure similar to those on large argillite pipes 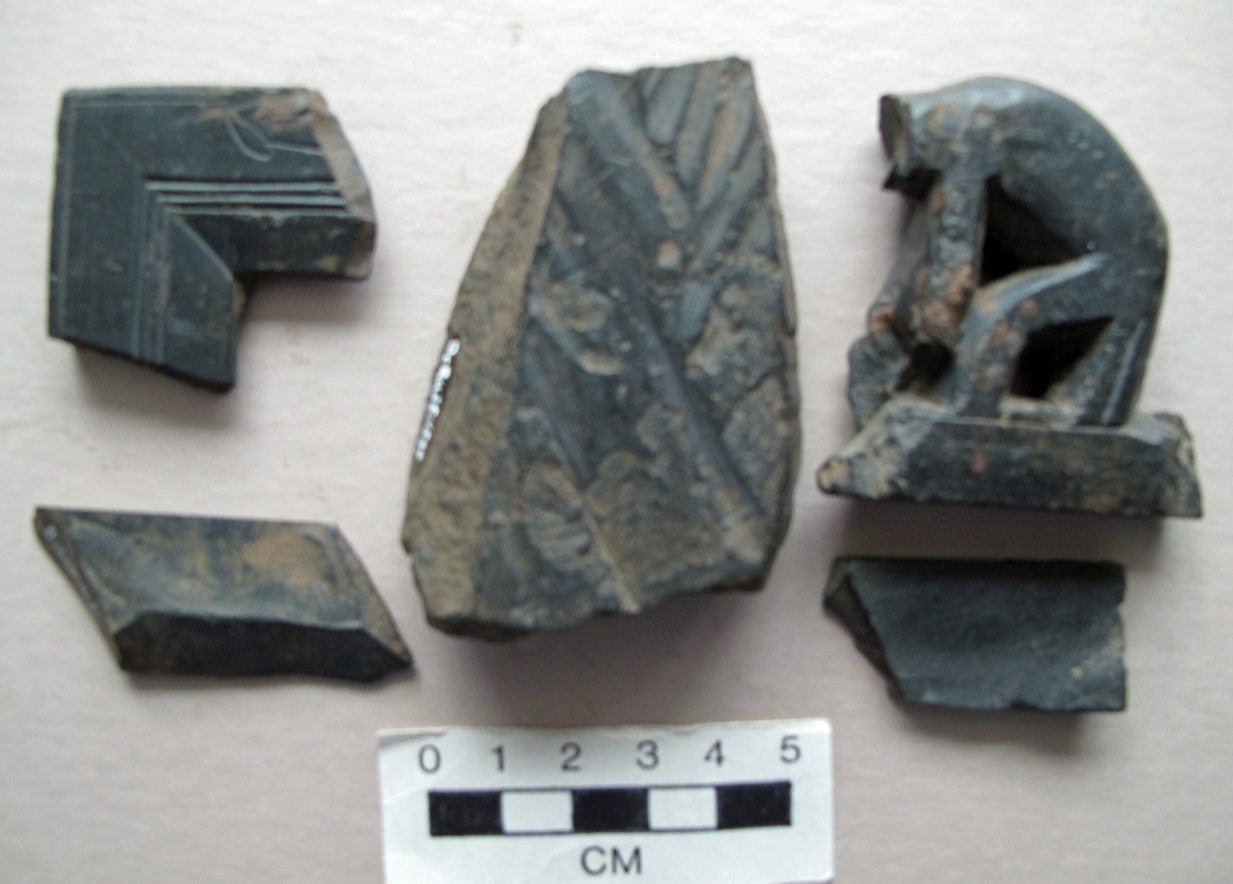 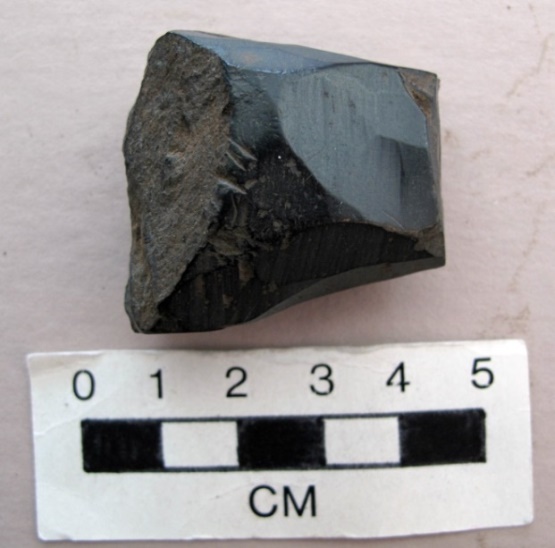 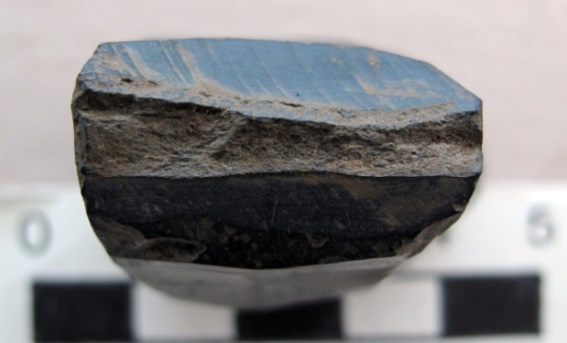 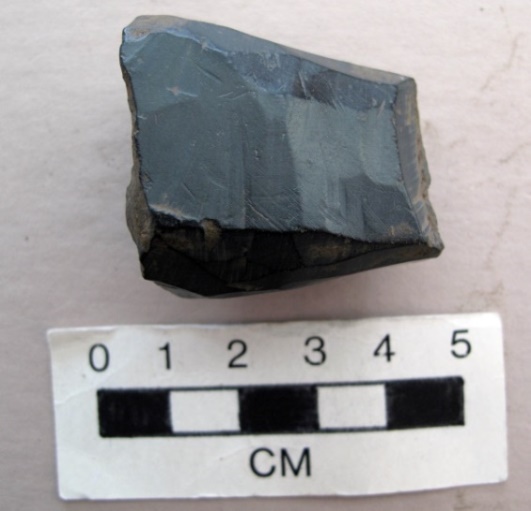 Figure 5. Three views of a discarded piece of sawn argillite. 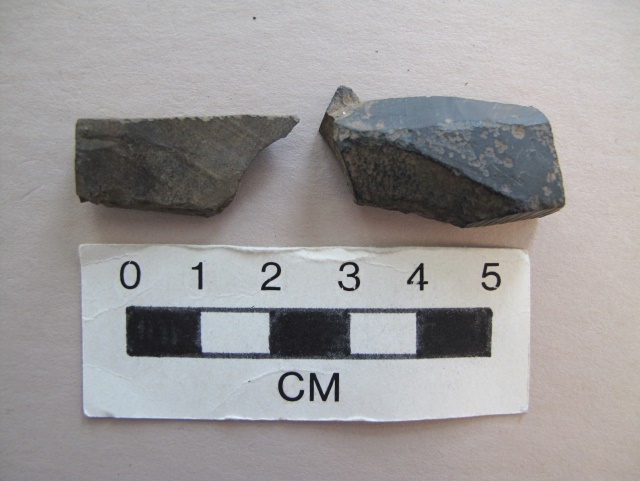 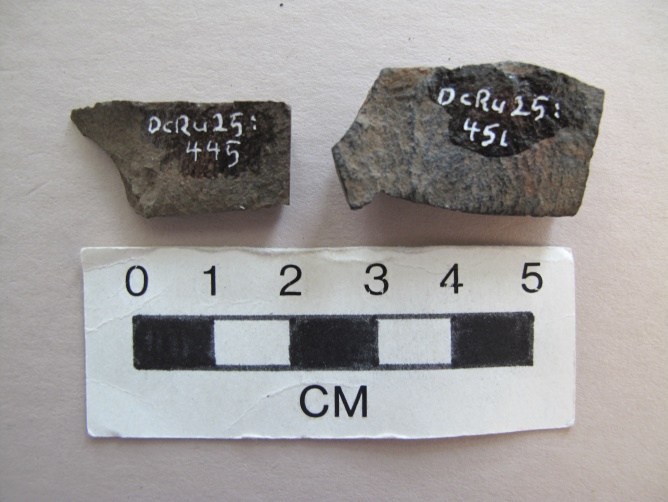 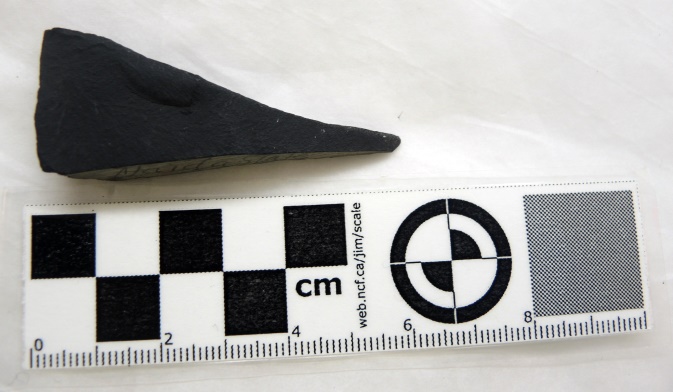 Round plates decorated with floral, circular and sunburst designs, often on both sides, were the most popular. Figure 7, shows a piece of argillite plate from the surface of site DcRu-123, which has a historic surface area component that is part of the historic Old Songhees Reserve site DcRu-25. The pattern on the fragment (DcRu-123:57) matches the design on the bottom of the same plate (fig. 7a)whose top designs match the pieces from the Craigflower Farm site.

Five pieces of a plate were found by Tom Bown in a systematic beach survey of old washed out garbage deposits at Craigflower farm (figure 8). The figure shows five pieces (two fit together) of the same argillite plate. 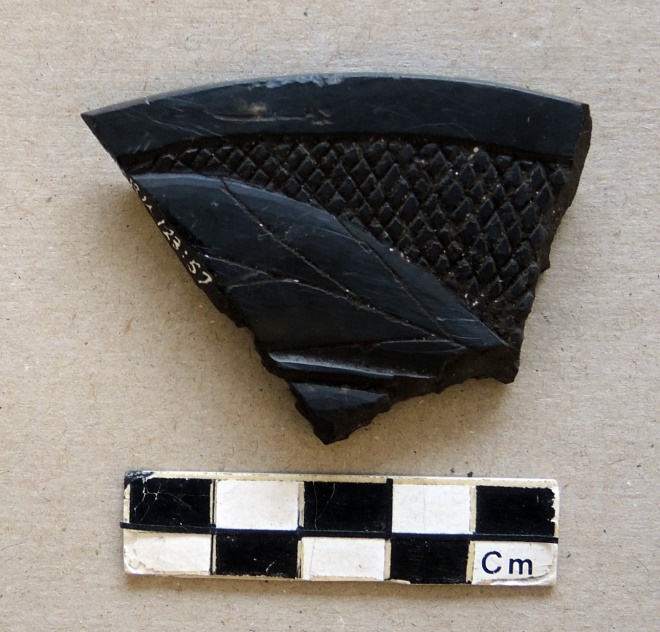 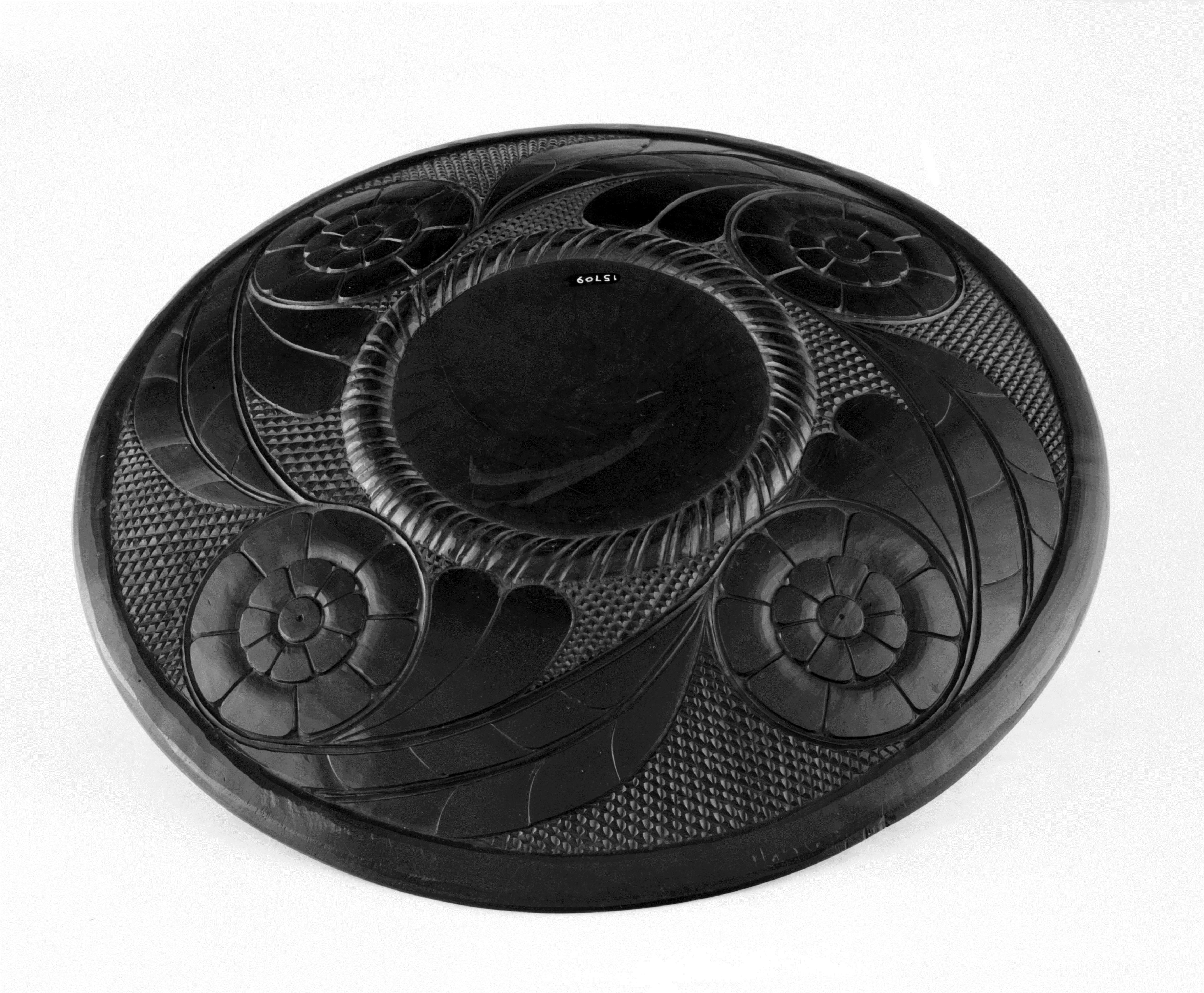 Figure 7 and 7a. Piece of argillite plate, RBCM DcRu-123:57, from the Old Songhees Reserve area that matches the bottom design of plate RBCM15709 in the Royal B.C. Museum collection. The top of the same plate matches pieces from the old Craigflower Farm. 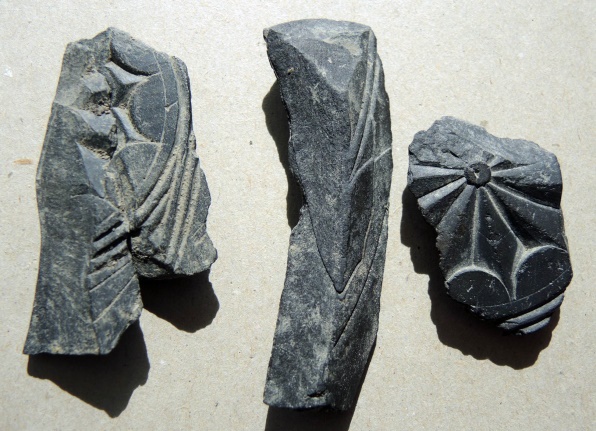 Figure 8.  Pieces of the same argillite plate from the old Craigflower Farm in View Royal. 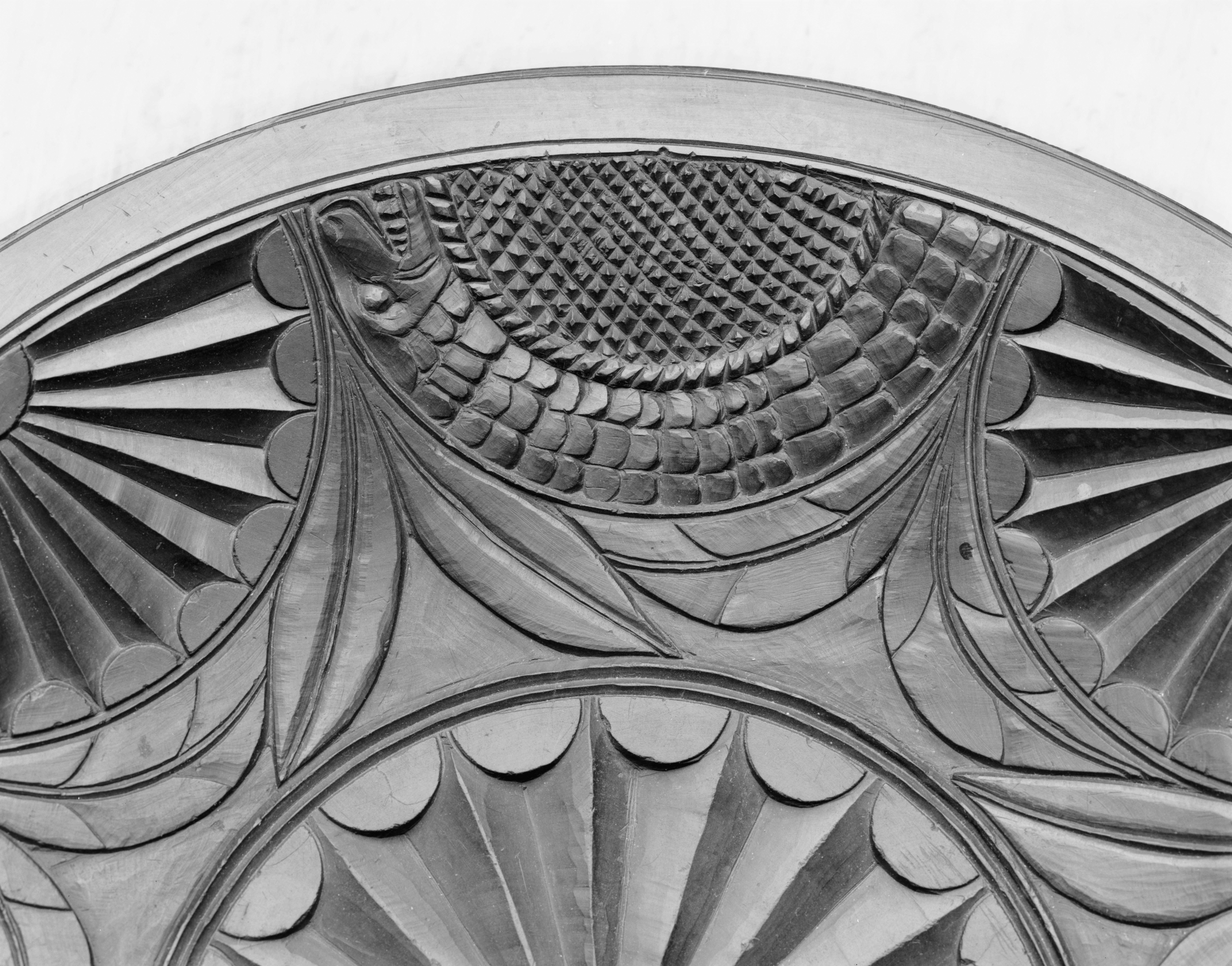 Figure 8a. Close-up of design patterns on argillite plate in the RBCM collection that has similar patterns as the pieces found at the Craigflower farm (RBCM15709).

Appendix 1. What is Argillite?

Argillite is variable in content. The particular dense black carbonaceous material used by the Haida from their Tllgaduu Creek reserve site is different than other argillites found on the Islands. The Tllgaduu argillite is basically composed of silt-sized fragments of kaolite (a fine clay) present in a fine carbonaceous clay matrix. Because of folding and heating of these deposites caused by an ancient nearby volcanic eruption, these argillite deposits have unique properties that enable it to be easily carved. It ranges from, gray to black and has a hardness of 2.5. Argillite contains some moisture when quarried and needs to be dried out to prevent cracking – but the moisture content does not have any effect on the hardness of the material.

Gessler Nicholas and Trisha Gessler. 1976. A Comparative analysis of argillite from Kiusta. Syesis 9:13-18.

Keddie, Grant R. 2016. Aboriginal Use and Context of Pipes, Tobacco, and Smoking in Northwestern North America. In: Elizabeth A. Bollwerk and Shannon Tushingham (Editors). Perspectives on the Archaeology of Pipes, Tobacco and other Smoke Plants in the Ancient Americas. 157-181. Interdisciplinary Contributions to Archaeology. Springer International Publications Switzerland.