After the building of Fort Victoria some of the Lekwungen peoples from outside winter villages moved into the inner harbor. In 1844, they became established at a new location on the west side of Victoria’s inner harbor. This village became what is now known as the Old Songhees Reserve (Keddie 2003).

By the mid-1840s a surface burial ground was established by the Lekwungen on the northern tip of Laurel Point across from the new village.

The burial ground was composed of several burial sheds covered with tuli reed mats and associated with prominent carved wooden burial figures that represented the dead who were buried there. The first Image of this location (fig. 1) was drawn by William McMurtrie a draughtsman in the hydrographic party surveying the American coast. He made a brief visit Victoria in July of 1850 (Monroe 1960). 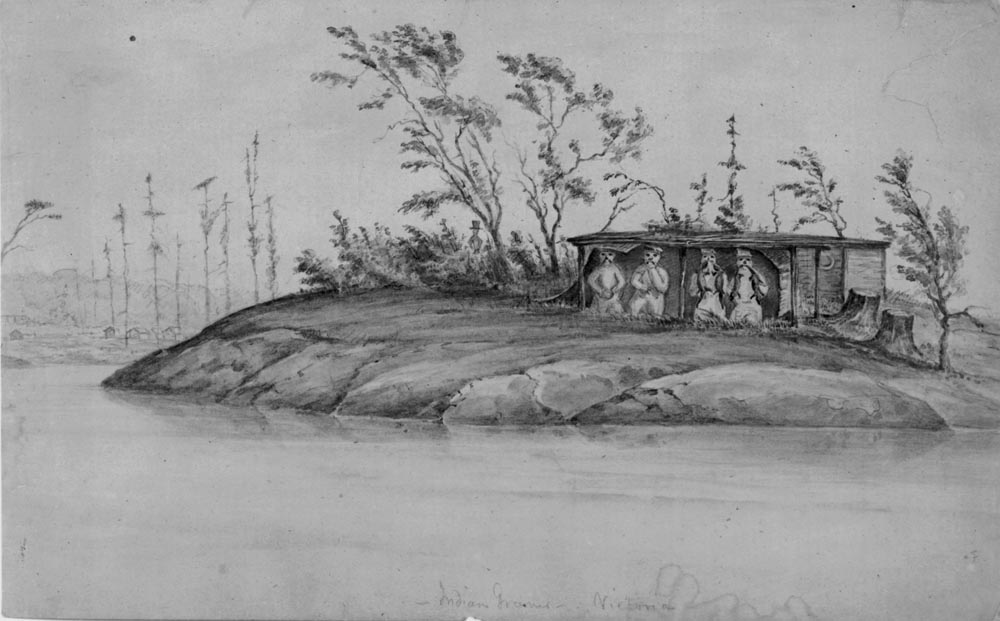 In the 19th century, Laurel Point, earlier called Deadman’s Point, was a long thin rocky peninsula (Fig. 2). The burial ground was a feature seen by everyone coming into the narrow portion of the inner harbour. Drawings of the location with human figures in front of the wooden shed-like structures, and one figure wearing a European style top-hat, were the subject of several other artists and at least one photographer over the next nine years until they disappeared.  Only a lithograph of the photograph has been located to date. Drawings and water colours were done on two occasions by marine surveyor James Alden during visits of the American steam frigate Active.  A day after the ship arrival on September 16, 1854, Alden drew a close-up version of the wooden figures (Fig. 3). Alden did other drawings in the area and returned in 1857 to do another water colour of Laurel Point and burial sites at the Coffin and Deadman (Halkett) Islands. He drew his ship USS Active in Esquimalt Harbour on June 29, 1857.

James Anderson (the son of Alexander C. Anderson of the Hudson’s Bay Company) saw the burial sites in 1850, and commented: “the wooden effigies marking the place where some notable was laid to rest in his canoe or wooden sepulchre surrounded by many of the personal belongings.” 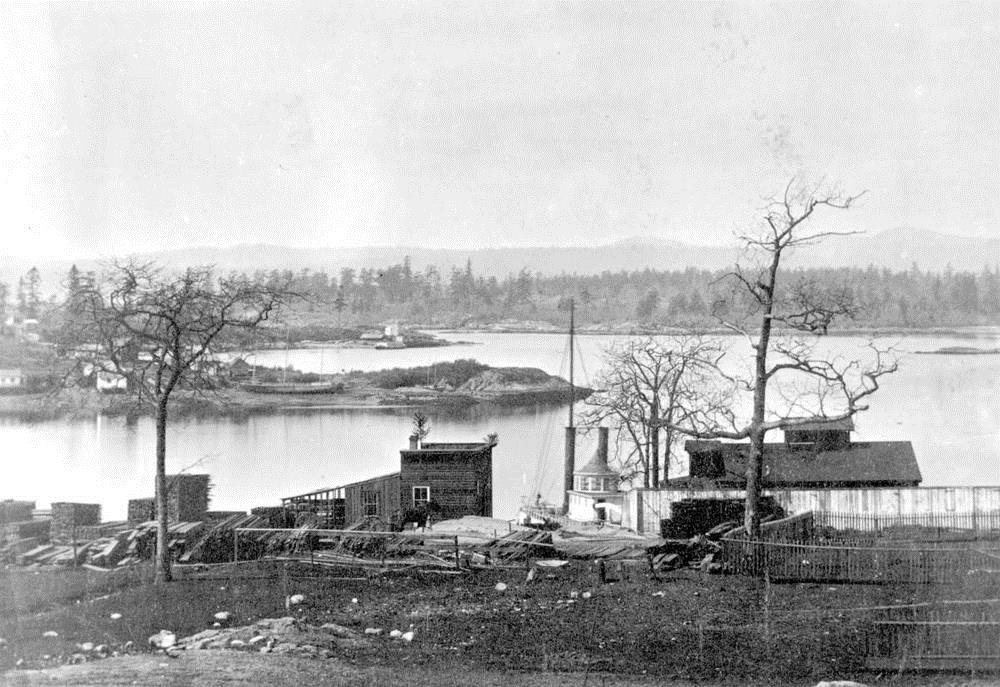 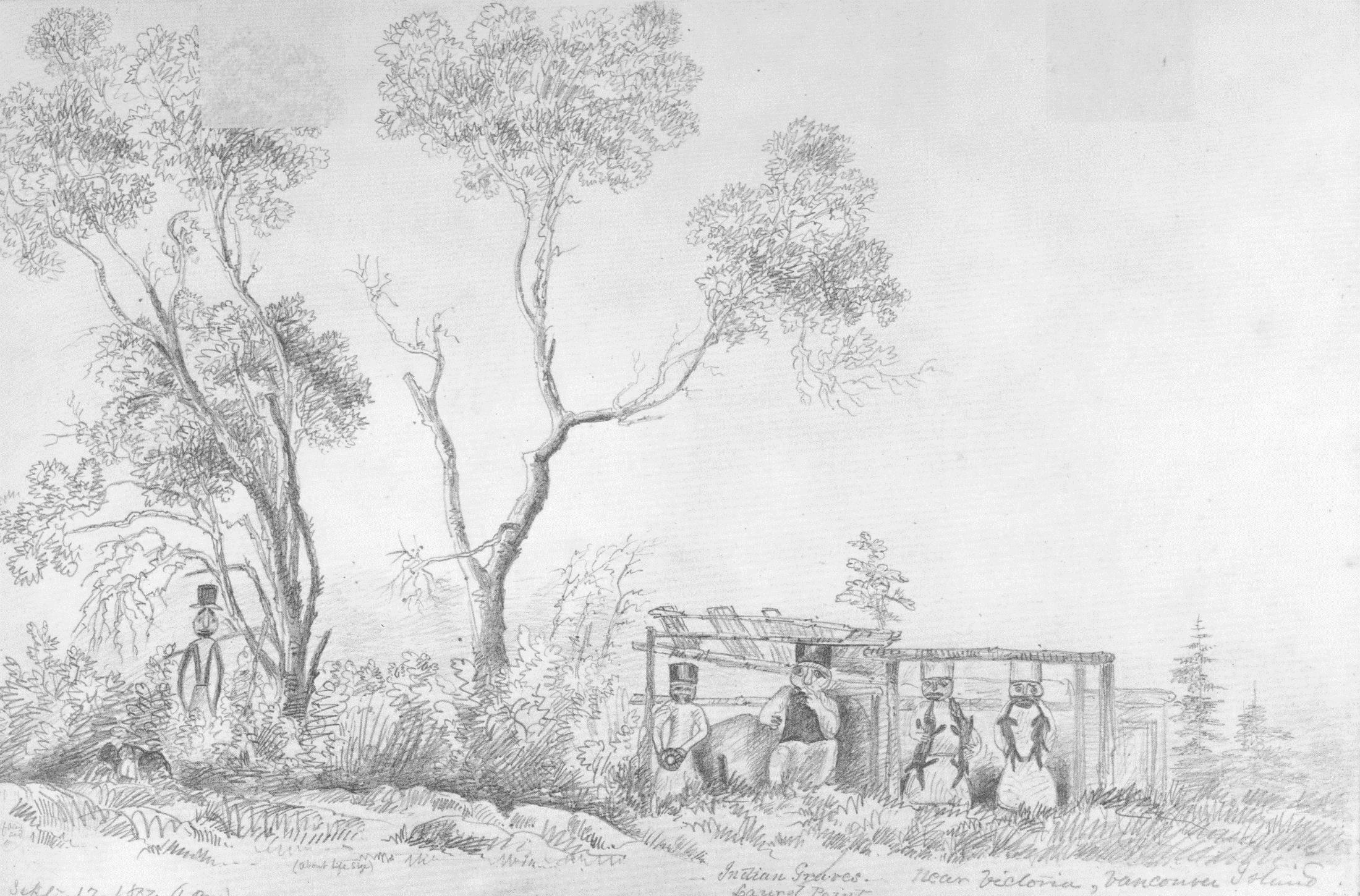 A drawing of the burial ground by Charles Chistian Nahl was being made into a lithograph engraving in 1858, but did not get published in the Gazette until October 16, 1859. The location was described on October 15, 1858, in the Victoria Gazette:

“The Burying Ground of the Songhish Chieftains, at Dead Man’s Point. The burying ground …of the chiefs of the Songhish tribe is located on Deadman’s Point, nearly west of Victoria …Subsequent to the migrations of whites hither in 1848-9, this burying ground has not been used … Since that period none of the deceased have been considered worthy of interment there. The four figures placed on the spot are rude carvings of wood, as large as life, each one representing the chief against whose grave it is placed. They are arranged in line, and are about two feet apart, facing the entrance of the harbour, and formerly struck the eye of the stranger …as a body of military sentinels on duty, guarding the inner harbour.

At one time they were very conspicuous, being painted in bright colors and with much taste, vermilion, black, &c, being the predominant hues. The old Laurel [arbutus] trees were well chosen by the Indians to shade their great dead.

One of the figures holds between his hands the skull of a dead enemy and rival chief, whom he killed in deadly fight, …He in his life was a warrior of renown, and the tradition with his deeds …in the memories of his descendants of the present generation, would make him a Songish Caractus.

The next to him was …a celebrated warrior; but more particularly famed as a spokesman, sagacious advisor, seer and statesman. He is represented as addressing the tribe, in an attitude of imperative command. The two others were renowned hunters revered in the oral annals of the tribe for daring feats in slaying the black bear, panther and wolf, …One is represented as holding in each hand a live wolf, rampant, the other is also grasping in either hand a wolf inverted”. 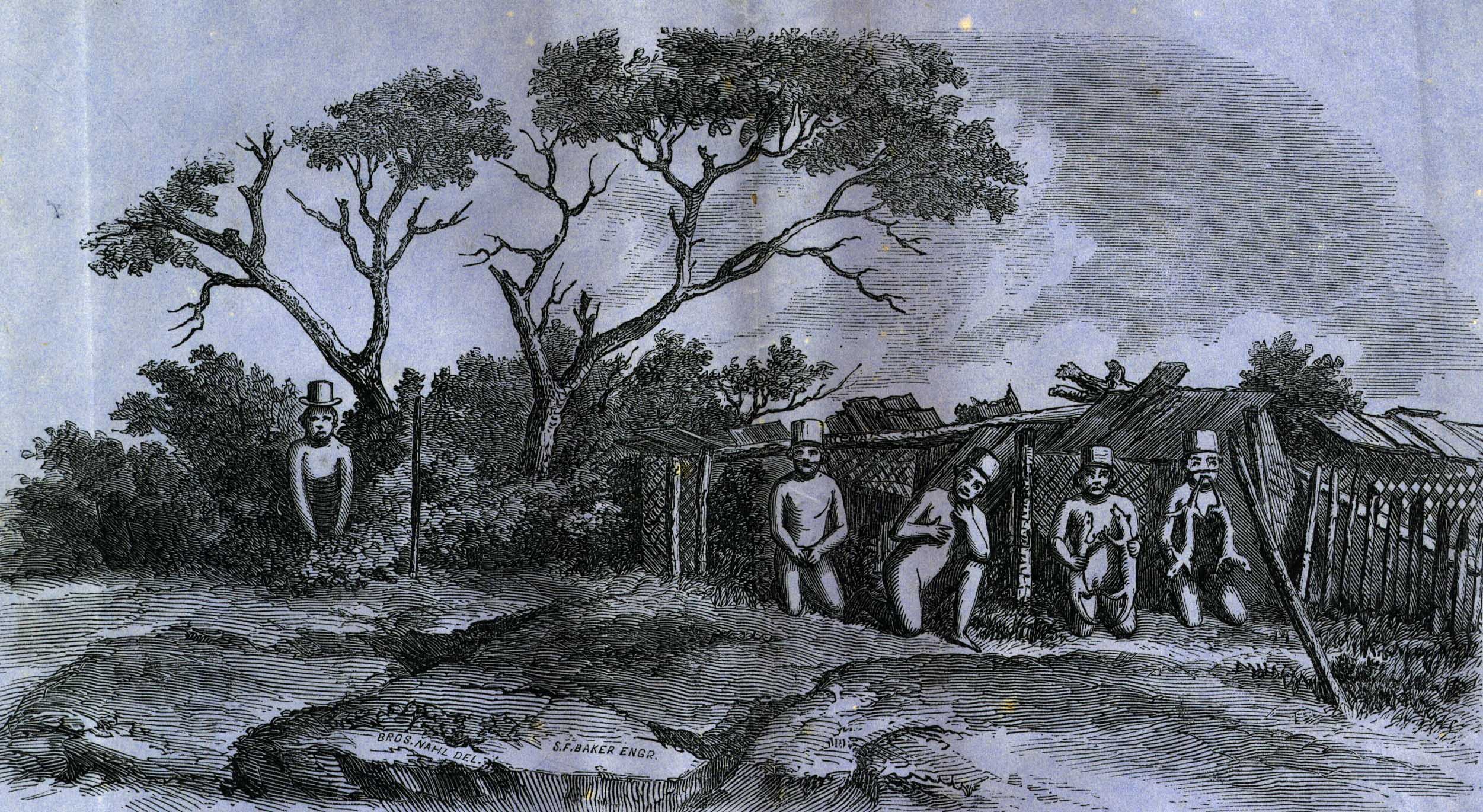 Figure 4. A lithograph engraved from a drawing by Charles Chistian Nahl. Published October 16, 1859, in the Victoria Gazette. RBCM PDP03722.

Water colours were drawn in three views by Tyrwhitt Drake in August of 1859’ Drake painted and described these figures as “sentinels over a large grave, of the family vault” – in one he saw an “old gentleman …doubled up into a sitting position, a bit of reed matting put over him & then he is built in with post logs of wood & a few stones to keep all snug” (King, 1999:153). 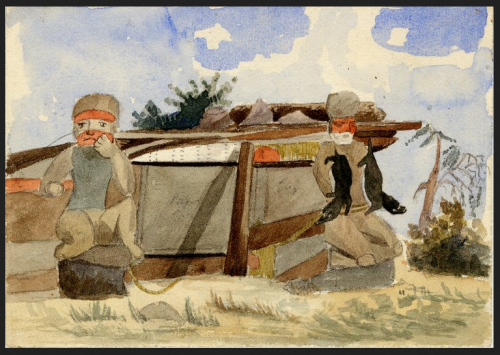 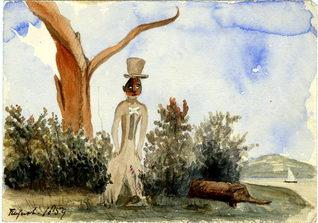 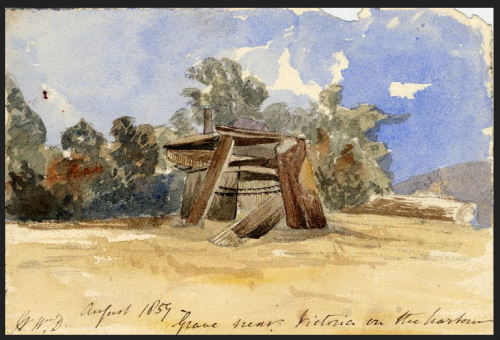 Richard Mayne, a Naval officer on board the Plumper (1857-60) and Hecate (1861), first visited Vancouver Island in 1849. He had a lithograph (illustration 18, opposite page 271) done from a photograph for his 1862 publication, Four Years in British Columbia, showing the burial ground on Laurel Point (Mayne 1962).  The present location of the photograph is unknown.  We can only speculate that the original photograph was taken by one of the two Royal Engineers trained in photography brought over in 1859. We can give a suggested date of late 1859 or early 1860 for the photograph from which the lithograph was made (Fig. 6).

In this lithograph the animal figures and arms have been broken off the wooden grave figures. This same lithograph, but in reverse, is found in John Keast Lord’s vol. II of his The Naturalist in Vancouver Island and British Columbia  published in 1866 (Fig. 7).

Lord added drawings of artifacts not at the site and of three skulls, also not related to the burial site. These skulls have nothing to do with this burial – they have been drawn in this lithograph to represent the two dominant types of artificial head shaping – The northern Vancouver Island style on the left and the southern Island type on the right, compared to the unshaped skull in the middle. 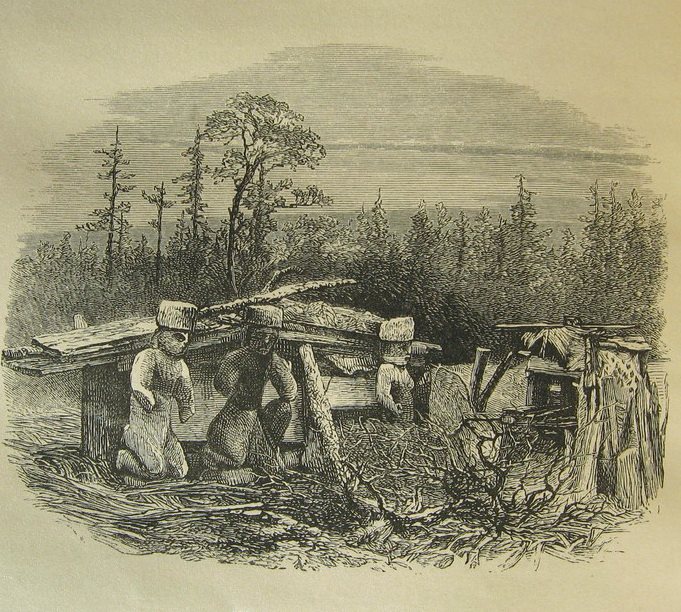 Figure 6. Lithograph of Laurel Point burial ground. The arms and animals have been broken off from the human figures. From Mayne 1862. 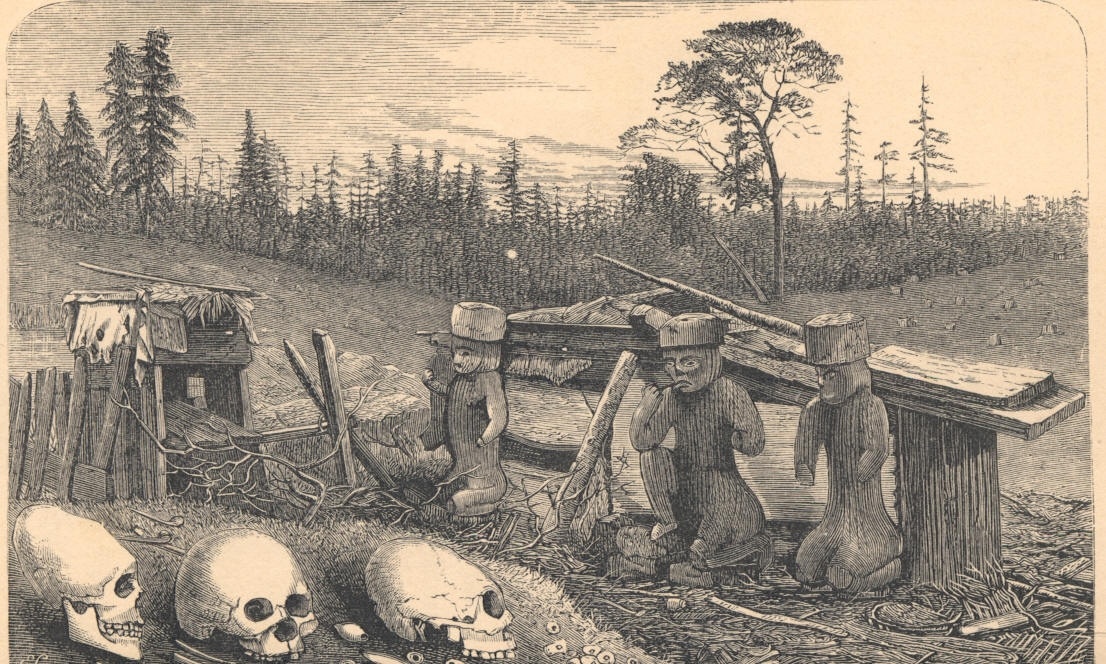 Figure 7. Lithograph with addition of skulls shown in J.K. Lord’s publication. The reverse of the Mayne lithograph. From Lord 1866.

Lord describes the burials and the objects that were added to the drawing that were not in the original photograph:

“ The Indian burial ground was drawn from a photograph. The huge figures, carved from solid trees, are placed round the boxes in order to keep away evil spirits; small tin vessels, pieces of coloured cloth, the skins of small animals, and all kinds of odds and ends, are hung by the relatives of the dead on the boxes containing the body. One thing they never fail to do – that is, to bore the bottom of the tin cups or vessels full of holes: thus rendering useless no one will steal them.

Scattered on the ground are flint implements, once used by the Indians, and  the three skulls spoken of. The one to the left is that of the chief, brought from Fort Rupert (vide trip to Fort Rupert, Vol. I), showing the effect of circular pressure; the middle one is an unaltered head from the middle Columbia; whilst that on the left shows the effect of flattening of the forehead” (Lord 1866 (2):260-261).

Lord mentions the location of the middle skull dug out of a gravel bank: “The place from whence I obtained these singular relics was a gravel-bank, near Fort Colville, whilst digging out the nests of land-martins” Lord 1866 (2):103).

The Laurel Point peninsula has undergone a great deal of development and has been greatly expanded by land fill over the last 60 years (Fig. 8 & 9).  It was only short lived, starting after 1844 and no longer being used by 1858. What happen to the ancestral remains is unknown. They may have been transferred over to the burial ground on Halkett Island. 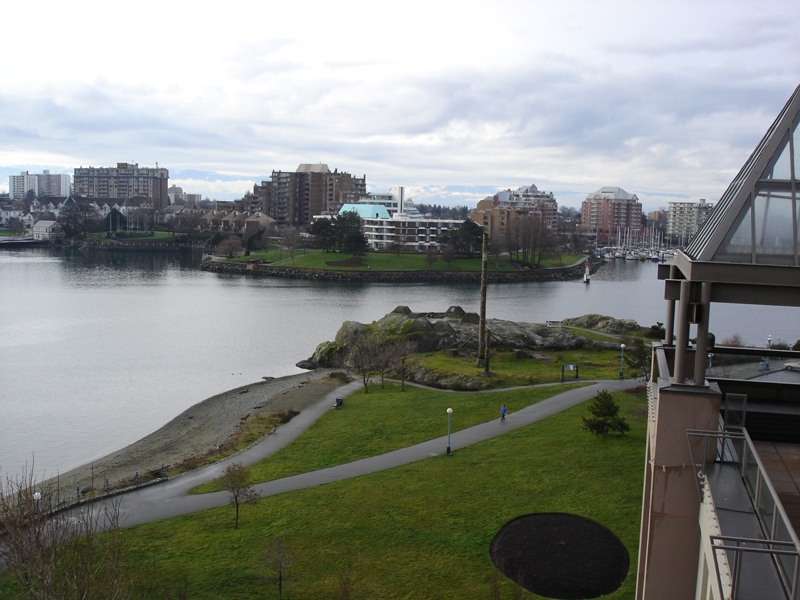 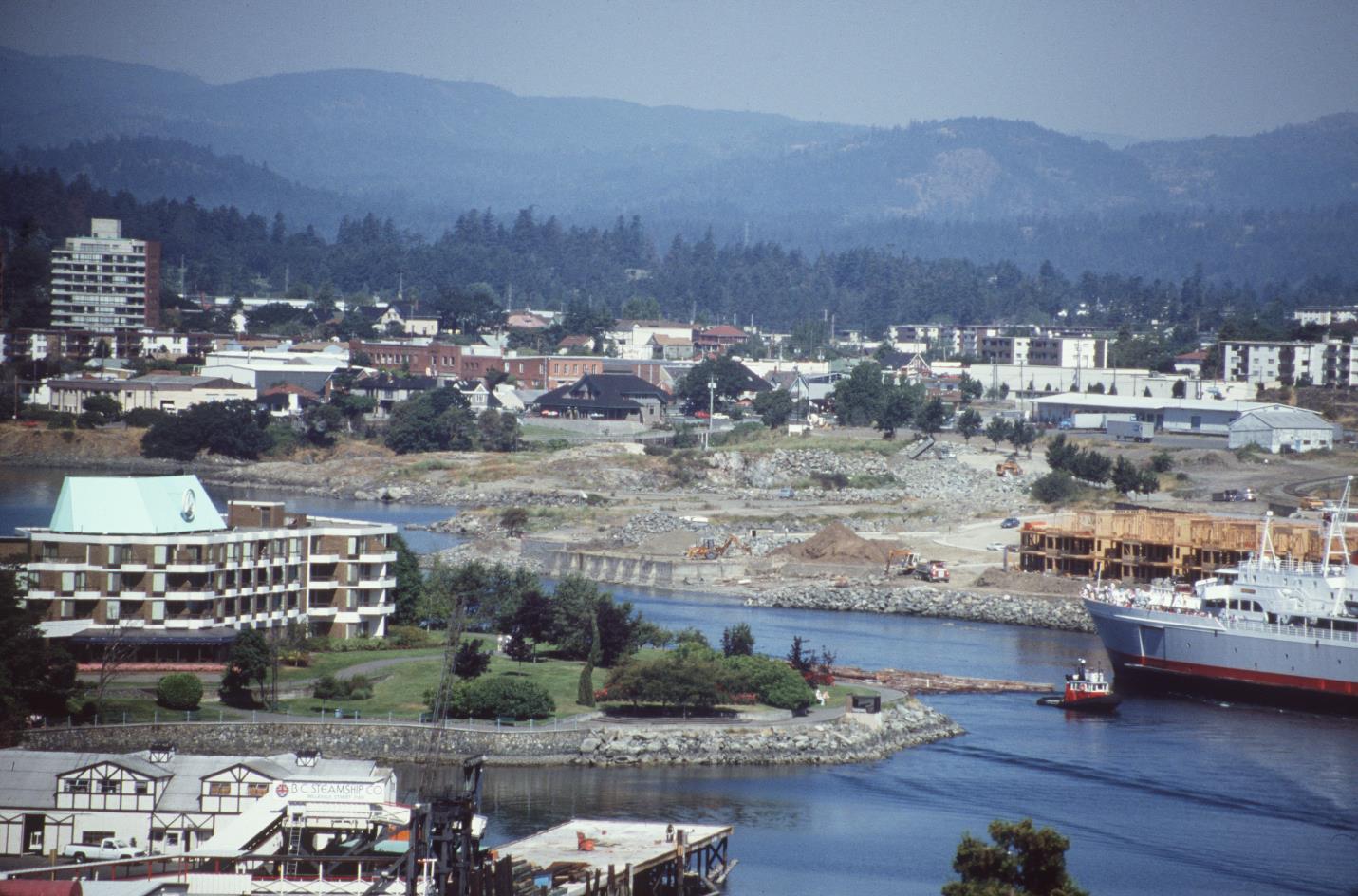