There are many different sizes of bird bone artifacts found in archaeological sites in British Columbia. The function of many of these remains unknown.  There is often no comparable artifact type in the ethnographic record. They are sometimes ascribed functions by archaeologists for which there is no evidence. Some of the long bird bone tubes referred to  as “drinking tubes” are in fact, what I am calling bird bone snare guards – devices on snares which prevent marmots and ground squirrels from biting through the noose cord and escaping. 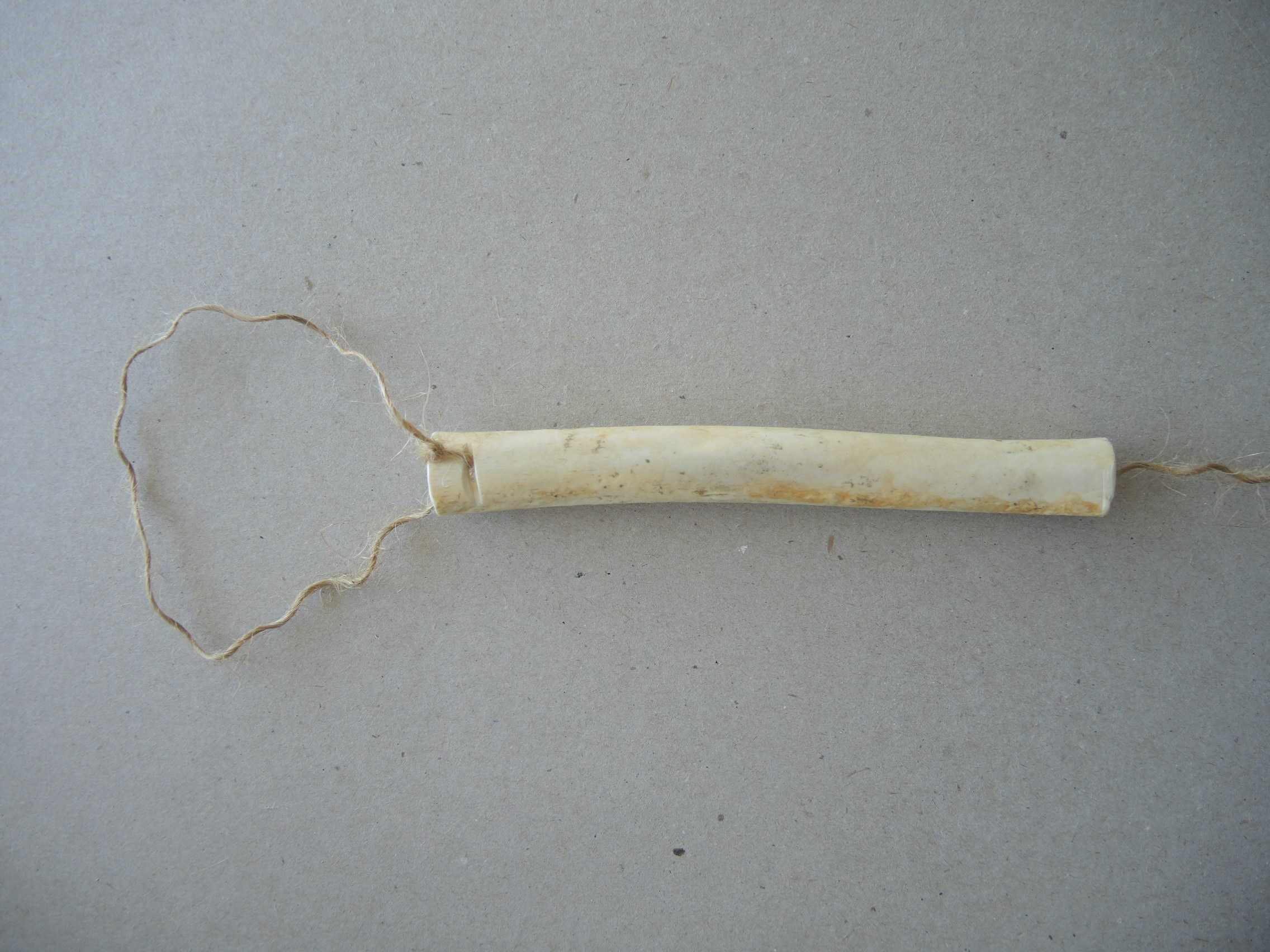 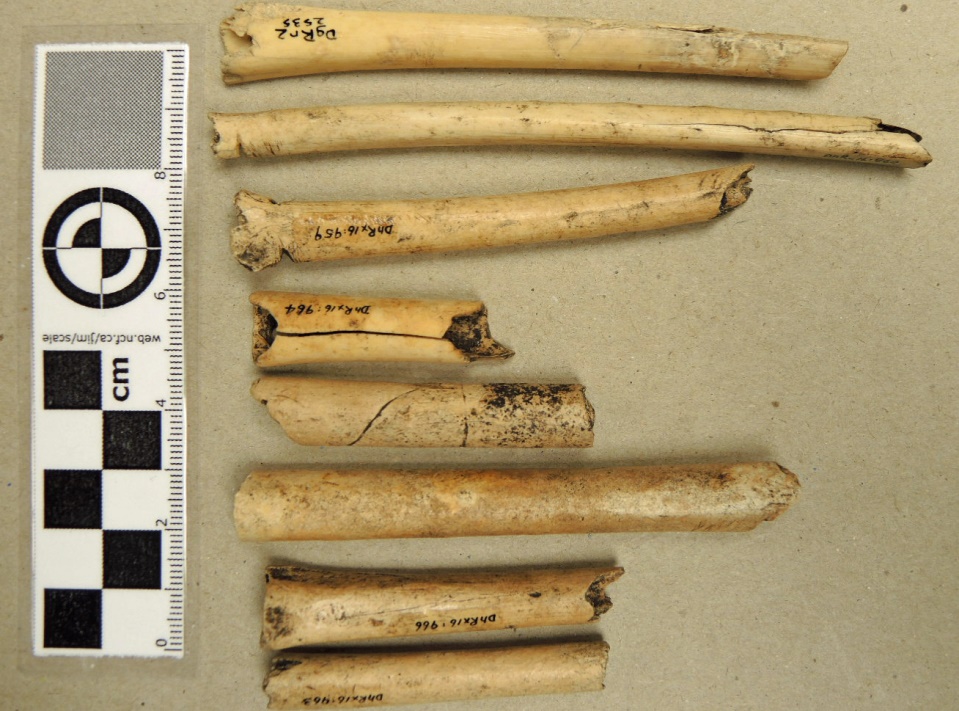 Here I present the evidence of how I determined, from my own observations and technology experiments, that some of the unidentified bird bone tub artifacts are snare guards. I also examine why split quills are superior material for making nooses.

When I was seven years old I assisted my 12 year old brother in snaring rabbits with copper wire. This was his spending money, as he received a dollar and twenty five cents for the skin and five cents for each foot. At the time the feet, with small attached chains, were sold in the stores as key chains and called “lucky rabbit feet”.  This was not so lucky for the rabbits. Fortunately, I have partly absolved myself of this wasteful practice by being involved in the creation of new parkland habitats.

One of the things I leaned in setting snares is that rabbits and other small animals can easily turn their heads and free themselves by biting through snare nooses made of rawhide or plant fibres, especially when they still have their four legs on the ground.

I have undertaken many experiments in making bone tools, which has included cutting off the ends of bird bones to make hollow tube shaped artifacts. The tube artifacts are usually made from the leg and wing bones of larger birds such as great blue herons and eagles. The easiest way to cut through the bone is with a series of small serrated edged stone flakes (figure 3). I practiced to produce cut marks similar to those seen on the cut ends of ancient bird bones.  If I am working quickly in removing the ends of a bird bone, I produce unintentional cut marks but these are usually alongside and parallel to the main intentional cut (figure 4). 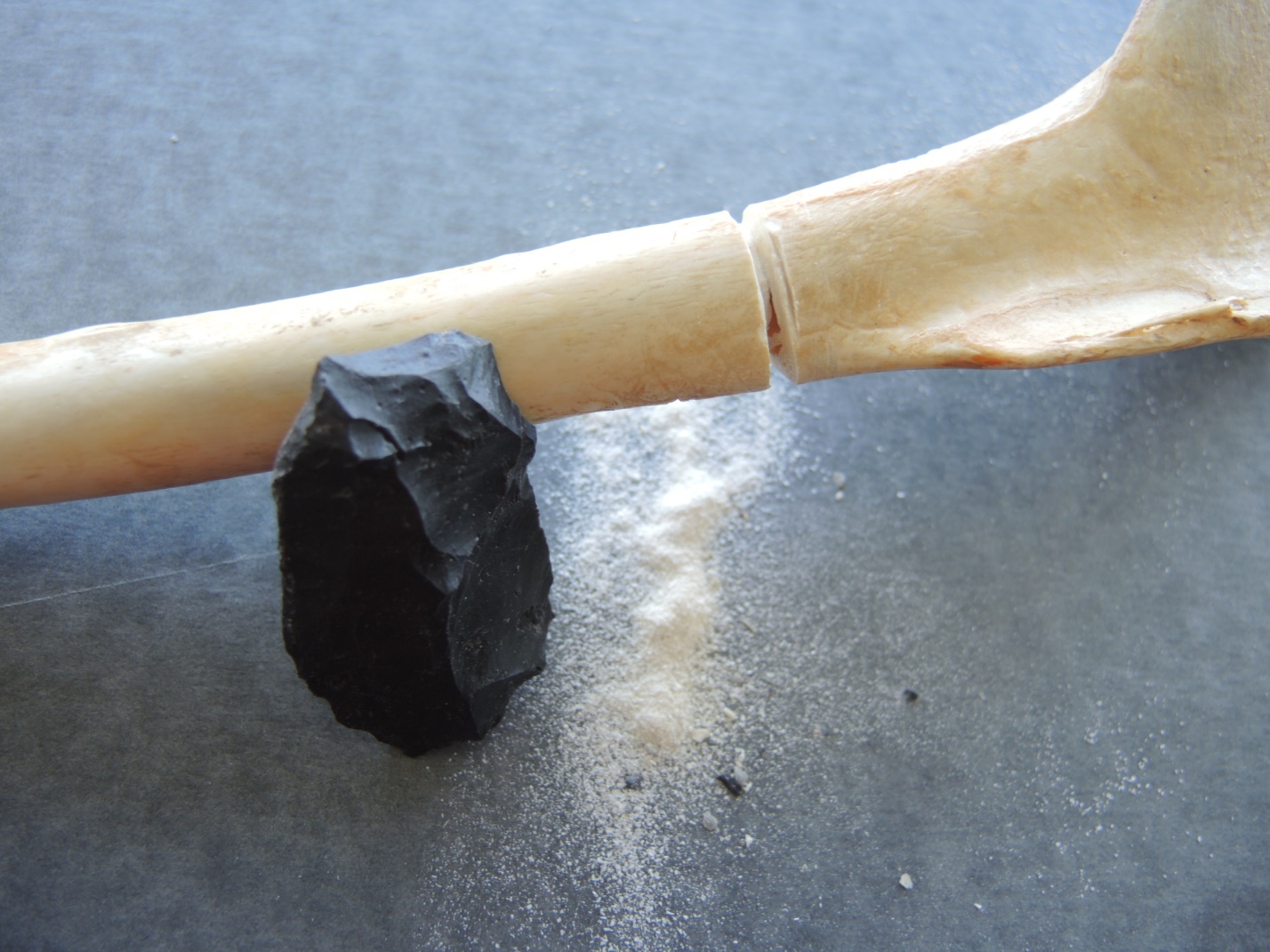 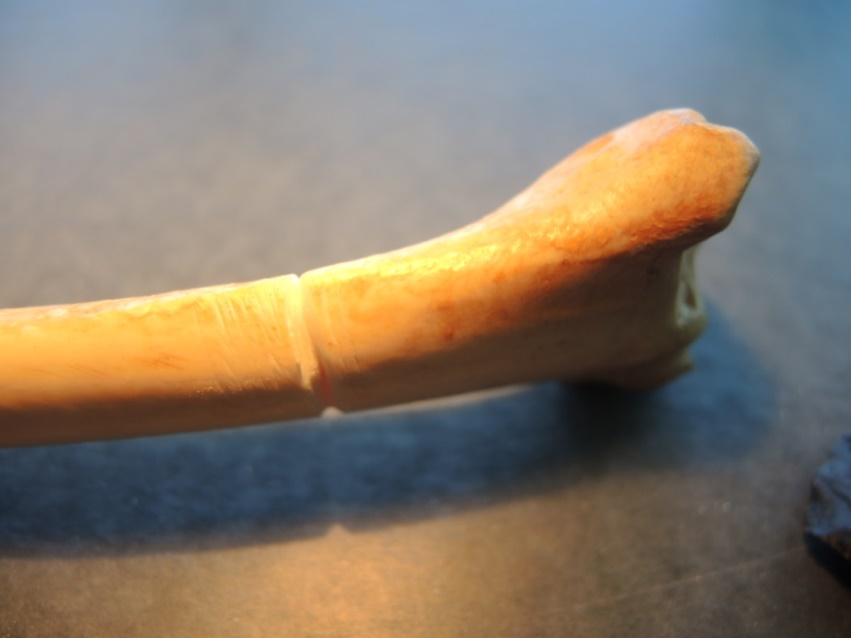 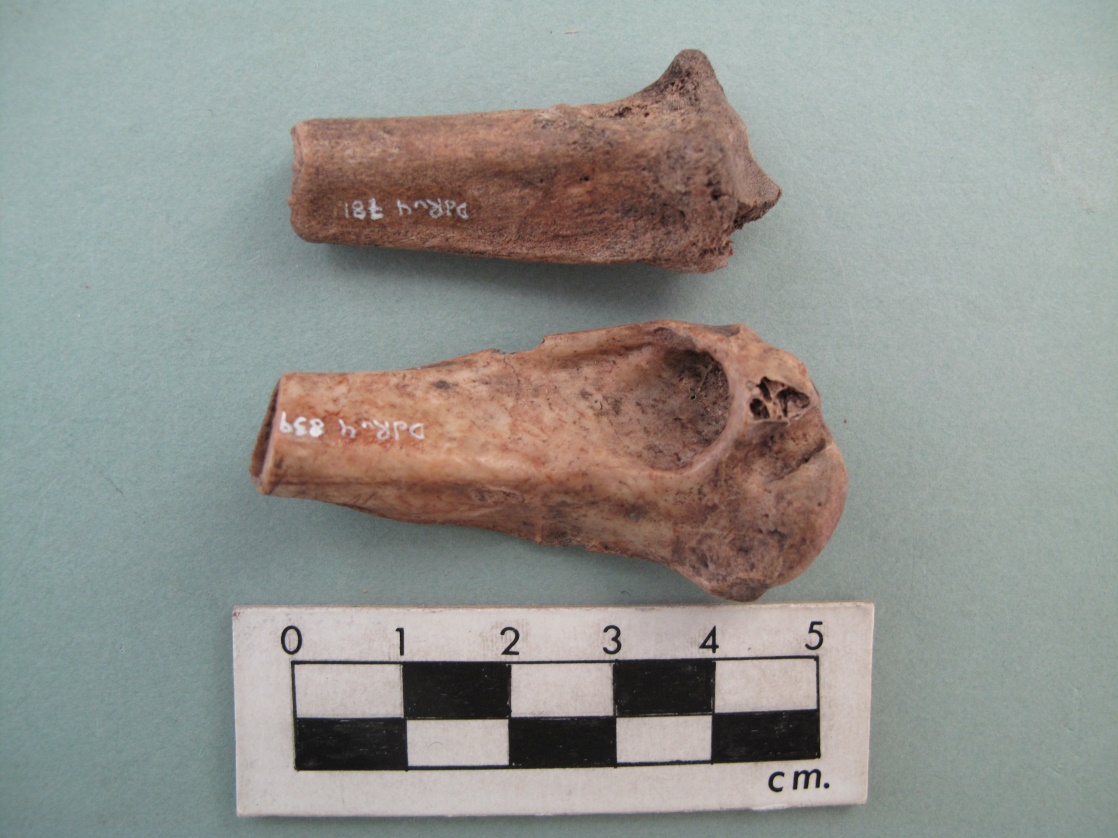 When I observed sharp cut marks across old bird bone tube artifacts in the museum collection, especially those at an angle across the bone, the origin of many did not make sense as being a product of either butchering the bird or of cutting the bone in sections. Rodent chew or scrap marks seemed a better explanation for some of the marks. Examining the sectioned ends of the bird bones showed a minimum of cut marks next to the cut hole, if at all (figure 5). Cut marks seemed to occur mostly on bone tubes that had an elongate hole cut near one end that was distinct from the cuts made in sectioning the bone.  These slots cut above one end of the bone would be for attaching a string cord. These slot holes are often heavily worn from having a string rubbing the hole. 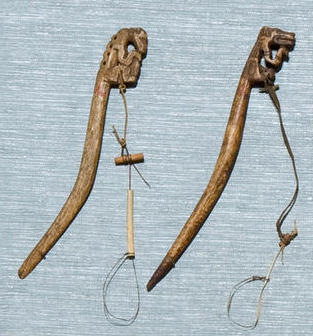 Figure 6. The marmot whale bone trap stake on the left still has the bird bone guard as a component of the noose. Chilkat Tlingit (AMNHCatalogue No. 19/568).

I have observed thousands of bones of all sizes that show cut marks from human butchering, as well as bones that have been chewed by rodents as a source of calcium. Human induced cut marks and rodent marks can usually be distinguished from each other.  By measuring the width of two parallel cuts representing the front incisors of a rodent we can sometimes identify which species of animal did the chewing. There is a difference between deep controlled chew marks and what on trap noose guards one might call quick panic scrap marks. In desperation to escape the rodent chews quickly at the bone tube covering the noose.

There is no mention of these noose guards in the ethnographic literature but I did find one of these bird bone tubes still attached to a snare in the collection of the American Museum of Natural History (figure 6). The marmot stake on the left of figure 6 shows the bird bone tube attached to the snare which is still attached to the whalebone stake. It was collected between 1869 and 1890. It is from the Chilkat of Haines Borough Alaska (AMNHCatalogue No. 19/568. Length 27cm; Maximum width 4cm).  The stake on the right, without a bone tube, was collected in same time period by Lt. George T. Emmons from the Tlingit Aak’w clan (AMNH Catalogue No. 19/562; Length 28.2cm; carved end 3.3×2.3cm).

It became clear that one end of the snare string was tied into the cut hole near the end of the bone and the string was then passed through the tube.  When the animal was caught the noose was pulled tight around its neck with the bird bone tube protecting the snare cord from being chewed. 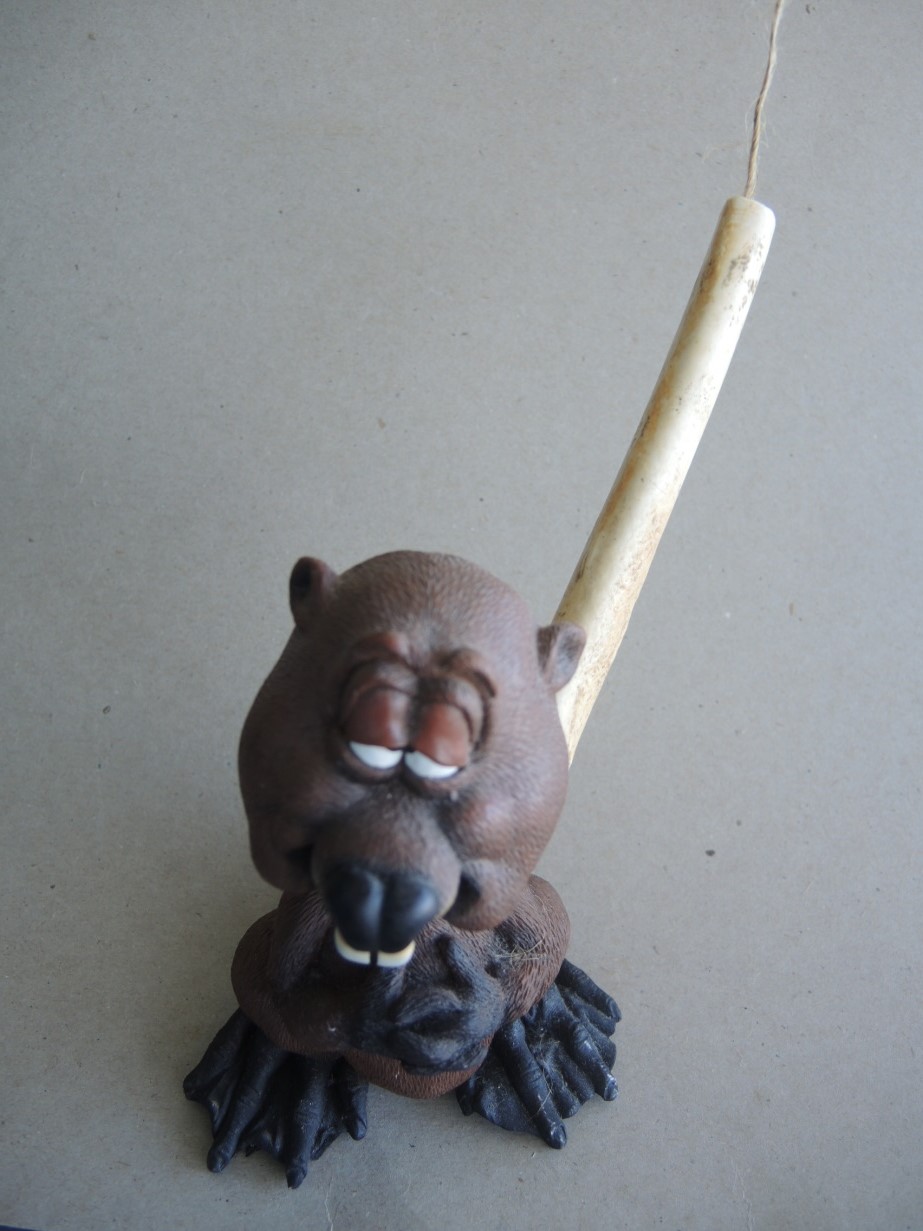 (1) The string noose extends through the bird bone tube.

(2) The end of this noose is tied through a hole or around a groove at the lower end of the tube.

(3) The string is looped out of the bottom of the tube to form a noose.

(4) When the animal is caught and pulls on the noose the bone tube is pulled down to the animal’s neck.

(5) The animal cannot bit the string because it is covered by the bone tube.

(6) The bottom of the tube, where it is tied, gets tucked into the neck of the animal in a position that is difficult to reach.

(7) The animal tries to bite at the bone tube creating evidence of teeth marks that are mostly near the bottom end above the cut hole and at a slight angle to the hole. Biting further up the tube creates more angular teeth marks.

One would predict that the gouge marks made from a marmot biting on a bird bone tube would include a series of close cuts across the surface of the turning tube or scrape marks randomly at angles across mid portions of the tube as the desperate animal dried to escape in a hurry. 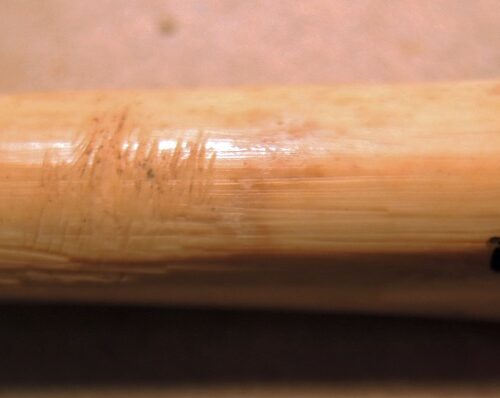 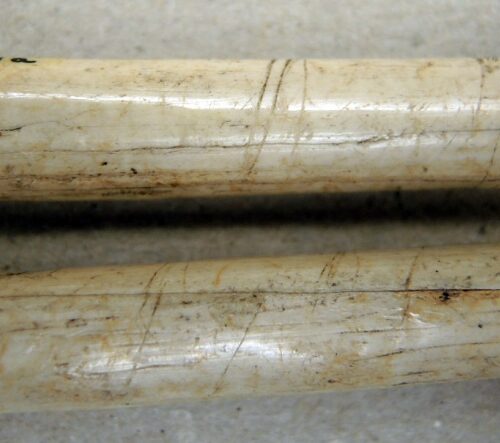 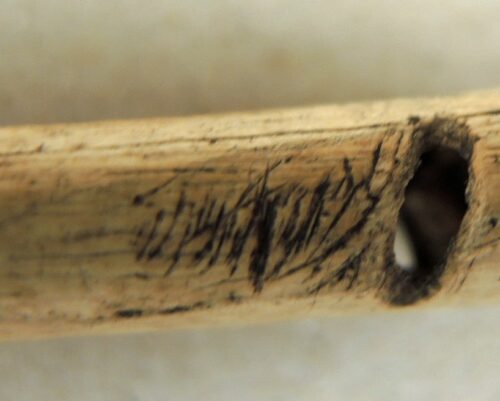 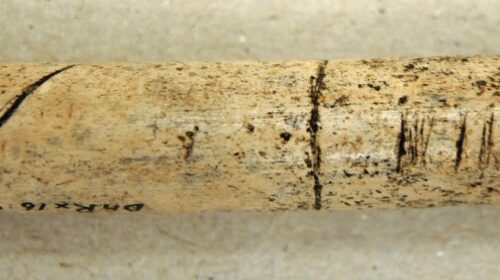 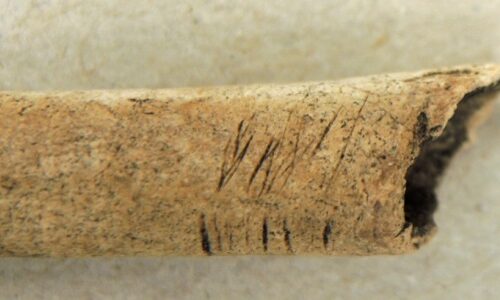 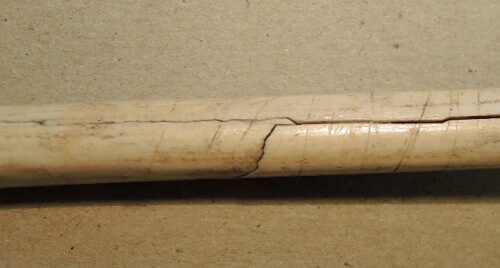 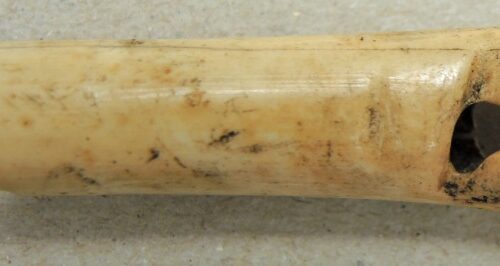 In reading that split bird quills were sometimes used as trap cords, I experimented to see how well quills lasted compared to other kinds of strings. I knew from previously splitting of bird quills to put feathers on arrows that they split longitudinally without breaking across the string.  If rodents bit into a quill from the side they might cause it to split over and over without breaking across the string. A quill string split many times lengthwise maintained much of it strength.  I surmised that if animals tended to bite a cord from the side rather than cut across the quill cord the noose would keep splitting into more strands and not break without a lot of persistent chewing.

In order to test this I caught six invasive grey squirrels and four rats in two old Mink cages set in my back yard.  I tied the trap doors tightly closed with a long strip of 3mm wide quill string from peafowl feathers (birds I had previously raised). If the animal bit the cord through, they could push the door open. Two of the squirrels and two of the rats bit the cord through and escaped. The other six animals had chewed the cords splitting them into long partial strips but the cord held in place, even when some of the longer stands had been severed.  This demonstrated the probable preference for Indigenous peoples using quills as snare string. The other advantage was the slipperiness of the quills which will not catch on things like a plant fibre or rawhide cord. Some snares had special slip triggers made by setting a quill trigger in a quill noose.