A tale of two tails

The armoured glyptodonts and ankylosaurs are one of my favourite examples of convergent evolution, the evolutionary phenomenon in which distantly related animals evolve similar structures or body shapes. Ankylosaurs are the armoured dinosaurs covered in bony plates called osteoderms, and are one of my favourite groups of dinosaurs. Glyptodonts, on the other hand, are mammals – they’re an exinct group of giant, herbivorous armadillos that disappeared about 10 000 years ago. The last time glyptodonts and ankylosaurs shared a common ancestor – a great-great-great-great-grandparent, if you will – was over 300 million years ago, but these two groups of animals evolved similar anatomical features. Most unusually, both ankylosaurs and glyptodonts evolved weaponized, sledgehammer-like tails. 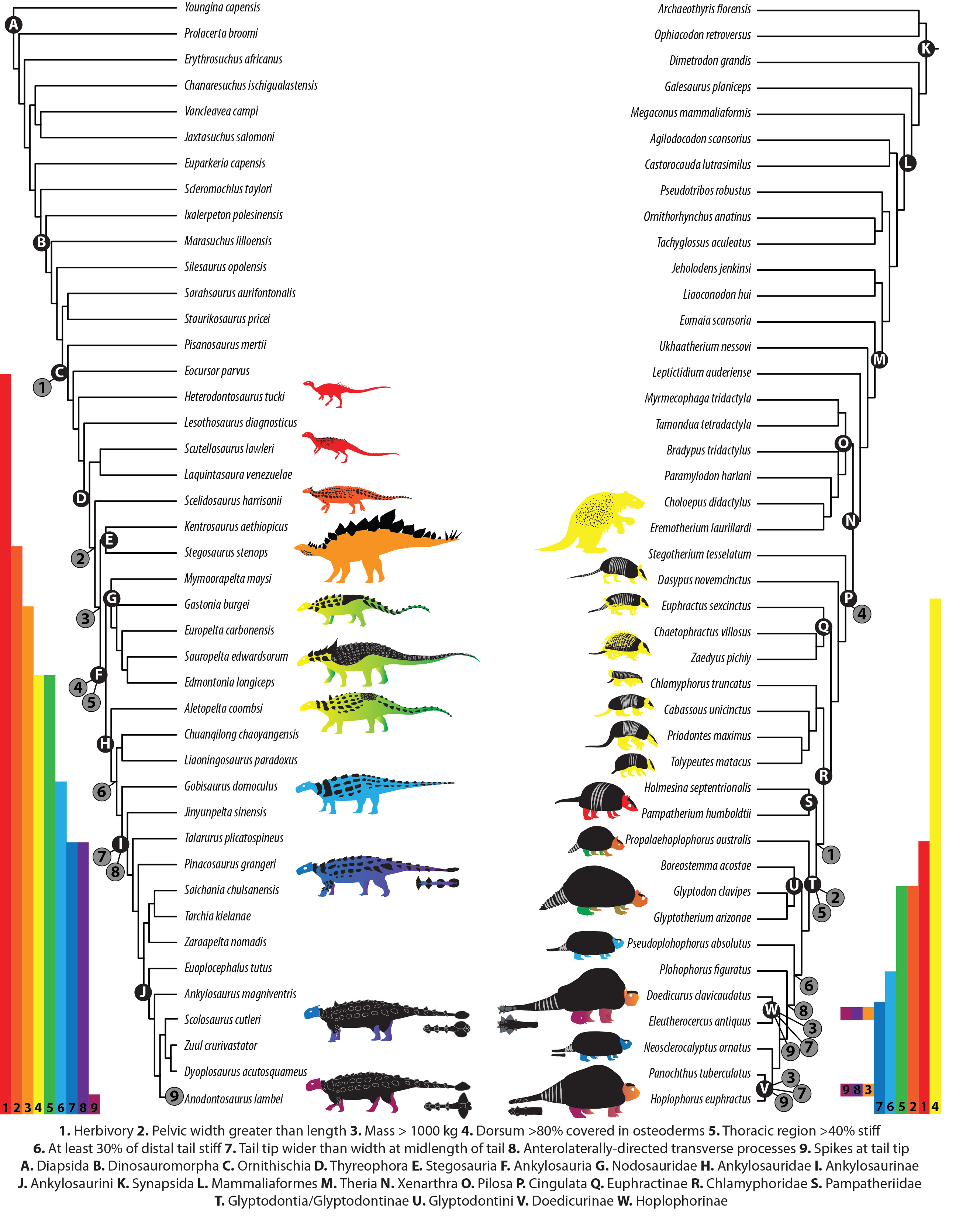 In this study, I worked with my colleague (and former postdoctoral supervisor) Dr. Lindsay Zanno at the North Carolina Museum of Natural Sciences to figure out whether or not ankylosaurs and glyptodonts had followed similar evolutionary trajectories when evolving their unusual tail weaponry. Lindsay and I have previously worked on understanding the evolution of bony tail weapons across amniotes (turtles, lizards, crocodilians, birds, mammals, and their extinct relatives) and found that certain anatomical features like armour, large body size, and a stiff backbone were correlated with bony tail weaponry. For our new study, we dug deeper into the anatomy of ankylosaurs and glyptodonts. We wanted to know whether or not ankylosaurs and glyptodonts evolved some of their distinct features in the same way – did certain features evolve before others in both groups? By studying fossils in museums around the world, we were able to map features onto the family trees for ankylosaurs and glyptodonts and see at what points different features first evolved. It turned out that, despite a few differences, the overall pattern was the same: both groups evolved armour, large body size, and stiff backs before weaponizing their tails, and tails became stiff before the tip of the tail was expanded.

What does this similar pattern tell us about how or why tail clubs evolved in glyptodonts and ankylosaurs? When we see similar adaptations in unrelated species, it tells us that there might only be a few good solutions to the challenges that nature throws our way, or in other words, similar features evolve when species are faced with similar selective pressures. In this case,

Lindsay and I speculate that a heavy, expanded tail tip might not be able to evolve unless the tail is already modified to support the extra weight. Similarly, swinging a heavy tail club around might be easier if you have a stiff backbone to help brace against impacts. And lastly, the rarity of species with tail clubs in the fossil record also suggests that tail clubs aren’t easy structures to evolve, and might only be able to evolve when a lot of other anatomical features (like armour) are already in place.

Funding for this research was generously provided by NSERC, the North Carolina Museum of Natural Sciences, and the Jurassic Foundation.

Arbour VM, Zanno LE. 2019. Tail weaponry in ankylosaurs and glyptodonts: an example of a rare but strongly convergent phenotype. The Anatomical Record.

Abstract: The unusual clubbed tails of glyptodonts among mammals and ankylosaurines among dinosaurs most likely functioned as weapons of intraspecific combat or interspecific defense and are characterized by stiffening of the distal tail and, in some taxa, expansion of the distal tail tip. Although similarities in tail weaponry have been noted as a potential example of convergent evolution, this hypothesis has not been tested quantitatively, particularly with metrics that can distinguish convergence from long‐term stasis, assess the relative strength of convergence, and identify potential constraints in the appearance of traits during the stepwise, independent evolution of these structures. Using recently developed metrics of convergence within a phylomorphospace framework, we document that convergence accounts for over 80% of the morphological evolution in traits associated with tail weaponry in ankylosaurs and glyptodonts. In addition, we find that ankylosaurs and glyptodonts shared an independently derived, yet constrained progression of traits correlated with the presence of a tail club, including stiffening of the distal tail as a precedent to expansion of the tail tip in both clades. Despite differences in the anatomical construction of the tail club linked to lineage‐specific historical contingency, these lineages experienced pronounced, quantifiable convergent evolution, supporting hypotheses of functional constraints and shared selective pressures on the evolution of these distinctive weapons.