Meet an ankylosaur in the new book Zuul: Life of an Armoured Dinosaur!

I’m thrilled to announce the publication of my first book, Zuul: Life of an Armoured Dinosaur! Co-authored with my colleague Dr. David Evans (Temerty Chair of Vertebrate Paleontology at the Royal Ontario Museum) and published through the ROM Press, this book explores the discovery of a spectacular armoured dinosaur skeleton and what it’s revealing about the evolution and biology of these unusual dinosaurs.

For over a decade I’ve been interested in the palaeobiology of ankylosaurs, a fascinating group of extinct dinosaurs with a spiky, armoured appearance. I’ve studied how they used their unusual tail clubs and how those tail clubs evolved, how different species around the world are related to each other, and how those species changed over time. In 2016, when I joined David’s lab at the Royal Ontario Museum and University of Toronto as an NSERC postdoctoral fellow, I had the incredible opportunity to study a brand new dinosaur known from a nearly complete, exceptionally well-preserved skeleton. David and I named this new dinosaur Zuul crurivastator in a May 2017 paper published in Royal Society Open Science. The genus name, Zuul, is after the Ghostbusters monster of the same name, and the species name, crurivastator, means ‘destroyer of shins’ in Latin, in reference to its sledgehammer-like tail club.

In Zuul: Life of an Armoured Dinosaur, David and I pull together our recent and ongoing research on Zuul, my experience studying the biology of armoured dinosaurs as a whole, and David’s work on the dinosaurs of southern Alberta and Montana. We share how Zuul’s skeleton was discovered and excavated in the badlands of Montana and how it made its way to Toronto. We describe how it was named and how it fits into the bigger family tree of ankylosaurs, and what this new specimen is teaching us about ankylosaur armour and weapons. We even get to share what we know about Zuul’s broader ecosystem: the remains of many different species of plants and animals were found alongside Zuul’s skeleton, allowing us to understand Zuul’s friends, foes, and food.

Throughout the book we’ve been able to feature beautiful photographs of this amazing specimen, brand new illustrations by world-renowned palaeoartists Danielle Dufault and Julius Csotonyi, and behind-the-scenes peeks at ongoing scientific research on Zuul. It’s been a blast getting to study this wonderful specimen and work with such a talented team of fossil preparators, artists, exhibit developers, scientists, and the ROM publishing team to bring this book to press. I hope you’ll get a chance to appreciate the beauty and intrigue of these dinosaurs as much as I do!

Signed copies of Zuul: Life of an Armoured Dinosaur are available in the Royal Museum Shop now! 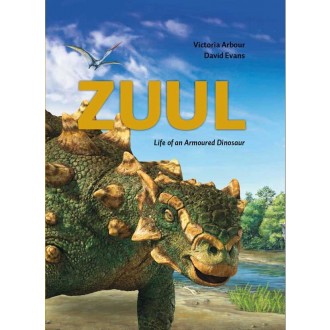