Letters from the north

I recently came across a small batch of letters while I was looking for something else.  The letters, described as PR-1615, were to Matilda John of Victoria.  They were written to her in 1899 and 1900 by her young boyfriend Harold Penn Wilson as he traveled from Victoria to Bennett and later Atlin.  Wilson worked for the Merchants Bank of Halifax and had been sent to their new office in Bennett.  The letters are mostly interesting in how they describe the journey from Vancouver to Bennett, and what it was like to live in the North at the turn of the century for a young bank clerk.  But there is also some gentle romance; Harold asked Mattie for a lock of her hair and claims that he is wearing her “badge”.  Harold was 19 and Mattie was about 16.

Harold and Matilda never married, he eventually married someone else in Prince Rupert, and died back in Victoria in 1975.  I haven’t been able to find out anything about Matilda.  There is a photograph of a Matilda John in our portrait files which may be her.  She is dressed in what looks like a nurse’s uniform.

Matilda kept the letters and they made their way to the Archives at some point.  They are quite fragile so they have been digitized by the Preservation team and now anyone can read them by clicking on the letter showing in the description and downloading the pdf file. 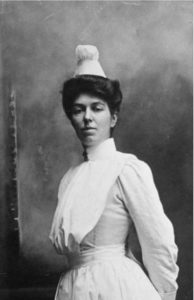