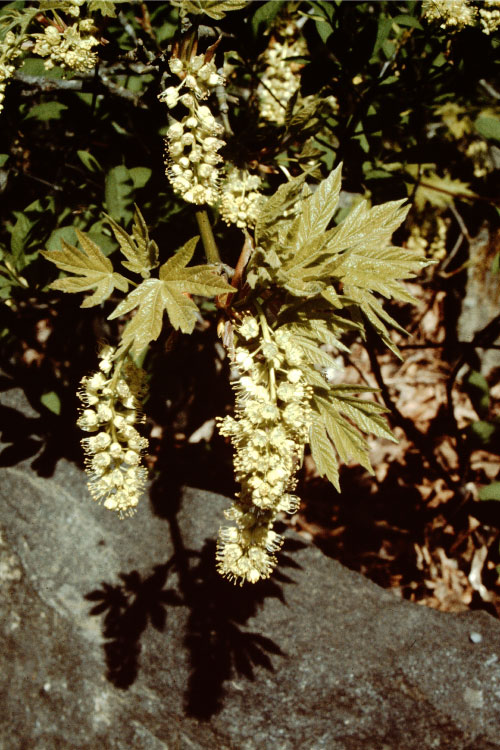 We have long recognized the vital role of shade trees in creating a pleasant environment around our homes. Most shade tree species and varieties hail from distant regions and lands. British Columbia is home to one of the noblest, but for some reason little-used shade trees, bigleaf maple.

Bigleaf, broadleaf, common or Oregon maple grows as a tall spreading tree to 30 m (100′) high, casting filtered shade beneath. In undamaged trees, the widely spreading root system supports a short trunk 60-150 cm (2-5′) across, from which reach out great limbs. However many trees have been cut, and hence grow as groups of tall greyish sapling stems. Old branches are bedecked and festooned with colourful mosses, leafy and crusty lichens. Young twigs are coloured an attractive medium green. Fat green buds end the branches during the winter.

Leaves of bigleaf maple are the largest of any tree in British Columbia. Their form is typical for maples; three to five sharply-tipped lobes with deep indentations between them. Spring foliage emerges soft yellow green in the sun’s light and soon expands to full size, some leaves more than 30 cm (12″) across. In fall the foliage mantles each tree in a rich yellow-orange cloak, before the leaves fall to earth to be crunched underfoot.

The 10-15 cm (4-6″) long flower clusters rival any in the genus of maples. They burst forth in early spring revealing often 50 or more small greenish yellow fragrant blooms. Male and female flowers are separate, but occur in the same cluster. Each flower consists of petal-like sepals, and five petals surrounding either a group of long protruding spindly stamens or a two-parted ovary with two stigmas. The clusters magnetically attract pollinating flies until each tree hums softly like a giant machine. The large fruits have the typical form of maple keys consisting of a wing and body. The spiny hairs, which cover the surface of the body, will penetrate and irritate the skin. 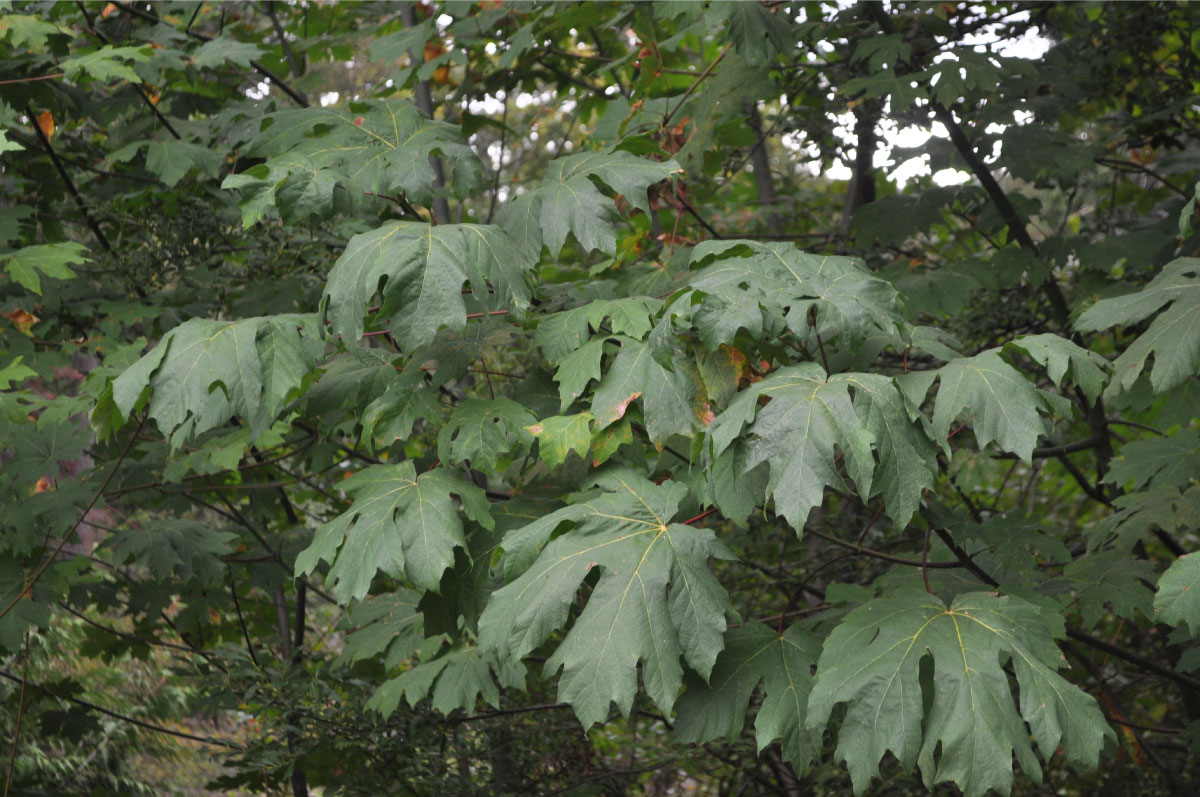 In British Columbia the maple’s natural range includes most of Vancouver Island and the adjacent mainland coast, extending well up major valleys. Bigleaf maple is reported as far north as Alaska, but the main distribution extends from BC mostly west of the Cascade Mountains south to California with an outlying population in Idaho. Bigleaf maple thrives in rich moist soils especially along rivers, streams and floodplains. Curiously you will also find it on moist rocky slopes often rooted in the rubble at the foot of cliffs. The tree grows well in disturbed settings along roads and fence rows. 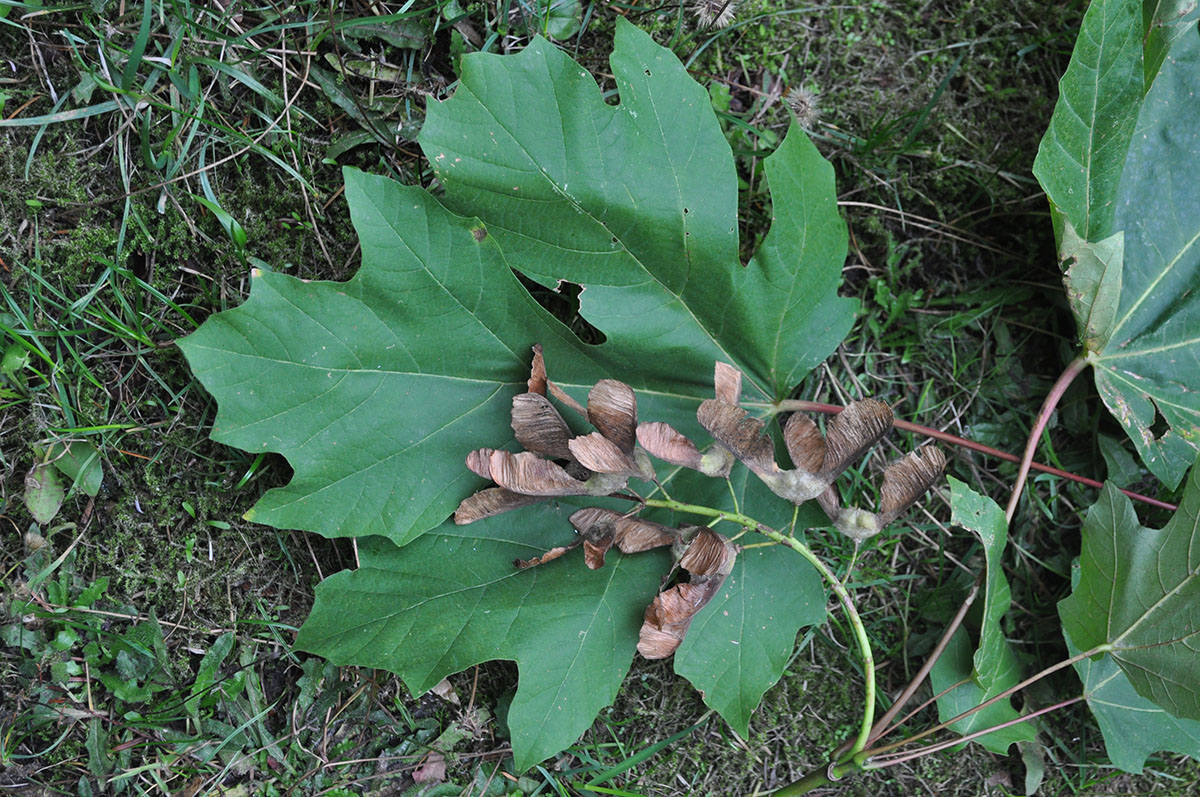 Although some authors consider bigleaf maple of little horticultural value, it makes an outstanding shade tree. The airy canopy produces light, rather than oppressive shade. Once the leaves fall, weak but welcome winter sunlight can penetrate into the home. Because of its size, this maple may not suit refined urban gardens, but it cannot be beat as a huge specimen tree for a large yard, park or street planting. You can easily raise maple trees from seeds planted in ordinary soil. Often, hundreds of seedlings struggle to survive under majestic parent trees. These seedlings transplant easily in the moist coastal winter and spring. You may have a problem growing a traditional flower gar­den below the thirsty tree. However, native species such as salal (Gaultheria shallon), Oregon Grape (Mahonia spp.) and sword fern (Polystichum munitum) thrive beneath its umbrella.

Bigleaf maple wood found many uses among British Columbia’s coastal First Nations. From it they made dishes, spoons, rattles, bark shredders, axe handles and numerous other tools. The wood is perhaps best known for the carving of beautiful spindle whorls and canoe paddles. Many aboriginal peoples valued the wood as a fuel, for it burns hot and clean. Bigleaf maple is an excellent fuel tree today too, because it can be cut to harvest the firewood and re-sprout fresh new suckers for future wood production. Well-managed root systems and stumps  yield firewood for many decades. Aboriginal people also used the bark to weave ropes and baskets. The large leaves were spread over and under food in steam pits and picking baskets.

Incidentally people have tried to make syrup from spring sap but the sugar concentrations are mostly too low and the day-night temperature changes too slight for a good flow.

The scientific name Acer derives from the classic Latin name for maple. The species name “macrophyllum” celebrates the tree’s most obvious feature, the big (macro) leaves (phyllum). This handsome arboreal giant and other maples were once happily in the Maple family (Aceraceae). Now through the wonders of DNA analysis they have been added to the Horse-chestnut family Sapindaceae.

Looking for a shade tree or an excellent permanent firewood source, try our native bigleaf maple. This under-appreciated native species deserves to be more widely grown. For more information on native species please visit our Native Plant Garden, of the Royal British Columbia Museum in Victoria.