the 31st of 32 views- Marine Biodiversity

After last week’s adventures in the world of vertebrates with Dr. Gavin Hanke it seemed only fair to give the invertebrates a chance!  Since last week we discovered that vertebrates were organisms that had spines, we were able to quickly deduce that invertebrates must be organisms that don’t have spines. We imagined what it must be like without a spine and flopped down in our chairs – how the heck would you be able to sit up or move around without a spine?  However, later on during our adventures we discovered that not all invertebrates are floppy.  In fact many are as hard and rigid (like crabs!), but those who are floppy use their floppiness to their advantage! 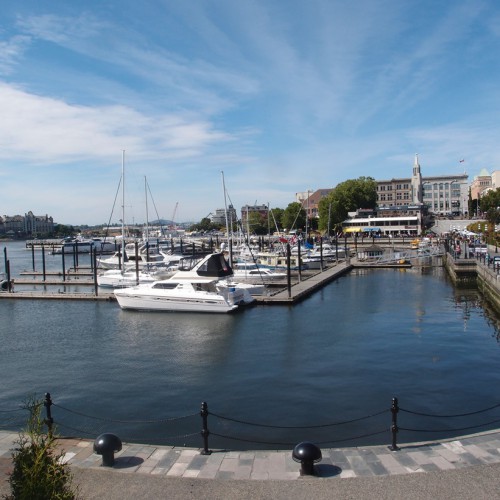 Adventures in the Inner Harbour

Before we set out to explore the Invertebrate Collection at the Royal BC Museum, we decided to explore what kinds of invertebrates we might be able to see right in Victoria’s Inner Harbour. We didn’t see many different invertebrates and we thought about some of the reasons why that might be, such as the pollution and all the human activity that happens in that area.  But we did manage to spy many barnacles, clams, and mussels – and even the elusive Horseshoe Invertebrate!  (Someone had obviously thrown an old horseshoe into the ocean, and we were pretty sure it didn’t have a spine!) 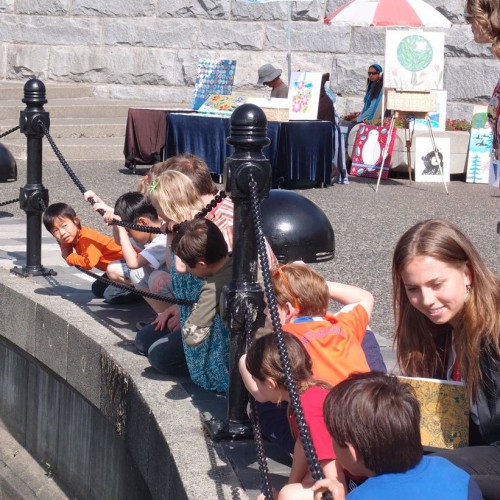 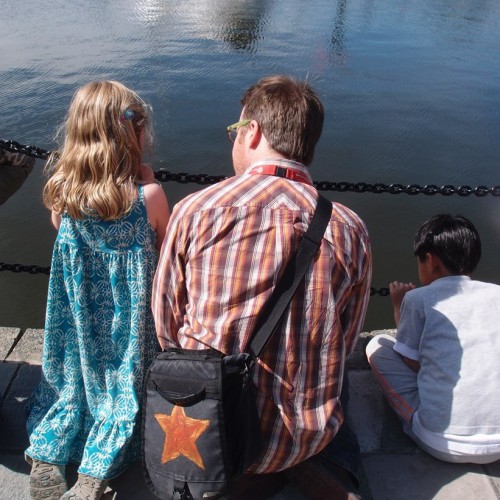 After we had a good look in the Inner Harbour, it was time to get back to the museum.  So off we went to the basement to get to the Invertebrate Collections where we met our terrific tour guide, Heidi Gartner, the Invertebrate Collection Manager! We learned that the Invertebrate Collection at the Royal BC Museum represents the incredible biodiversity of B.C.  Heidi’s  job is to maintain the collection, while constantly work on adding more specimens to it.  Heidi gets to go out into the field and collect new specimens, and then she brings them back, identifies them, and stores them away in alcohol to preserve them.  Her most recent trip was to the North Coast of B.C. 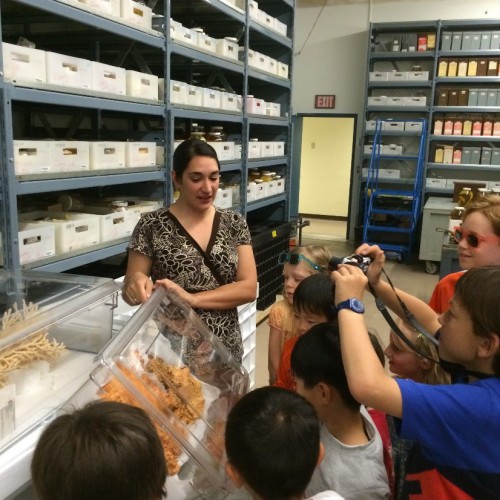 The one and only Heidi Gartner!

Heidi started our tour by showing us three different species of crab and some of the methods she uses to identify them, such as colour, size, and the number of spines between their eye and the edge of their face.  We also found out that we can tell if a crab is male or female by simply flipping them over.  A female will have a large U-shaped flap where she holds all her eggs, while the under-flap of the male is much smaller. We were curious as to how people safely collect some of the bigger crabs, like the Puget Sound King Crab, without getting pinched!  Heidi said the best way is to pick them up from behind…but you still have to watch out for the ones with really long pincers! 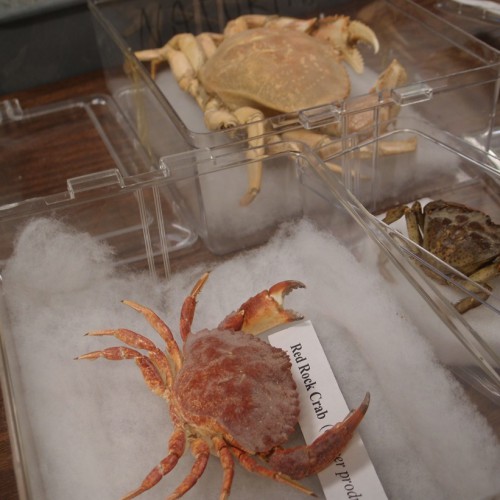 The European Green Crab is an invasive species that was brought over to the West Coast of Vancouver Island, but has been slowly moving up the Central Coast.  It is a serious threat to our native species of crab. 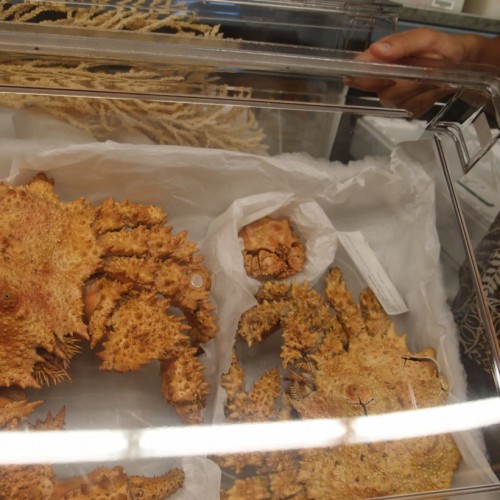 Puget Sound Kind Crab and its cute little baby (top right hand corner). These were collected right along the breakwater at Ogden Point! 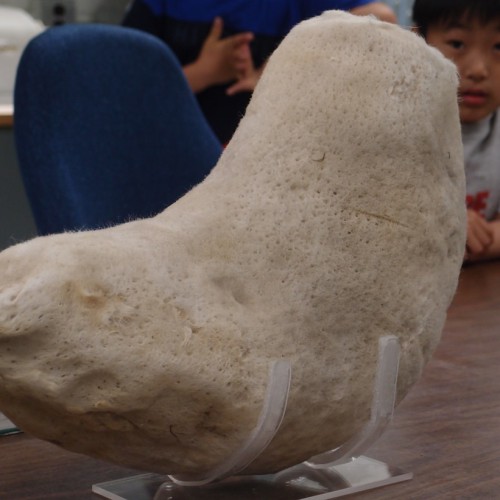 The Boot Sponge is a type of glass sponge, which means that it is not soft and squishy like the sponges we use at home! Boot sponges make great homes for all kinds of underwater organisms and make reefs, just like coral! 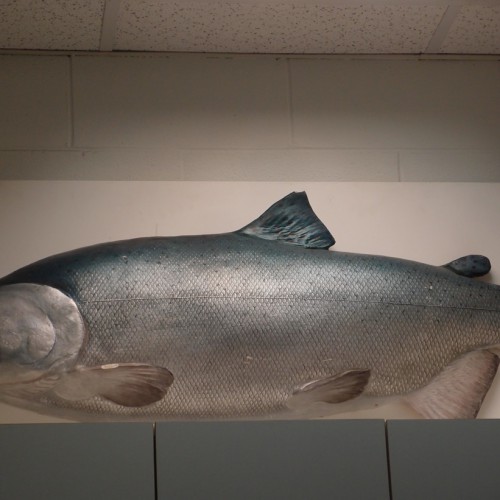 We have one more vertebrate question for you Dr. Hanke…What’s this fish? Our best guess was Tuna! 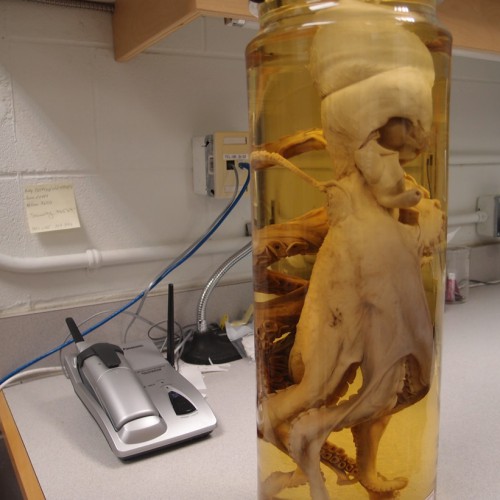 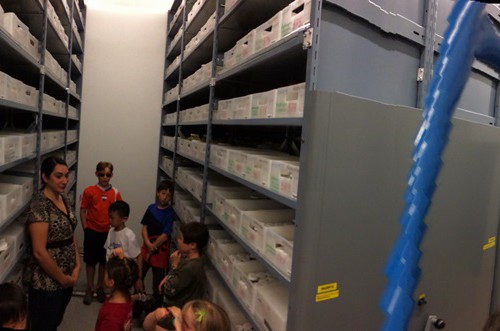 An awesome panorama shot of the massive RBCM Invertebrates collection

It must be hard to keep track of where everything goes, but Heidi explained that everything is organized taxonomically, which mean crabs go in one section, shrimp go in another, and so on, and so on.  Once you find the section you need, each jar is labelled to tell you where it was collected, who collected it, and when it was collected (one of the jars we found was collected in 1926!) We found some specimens that came from other parts of the world (like the Mexican Slipper Lobster), but now the Royal BC Museum only collects species from the British Columbia. 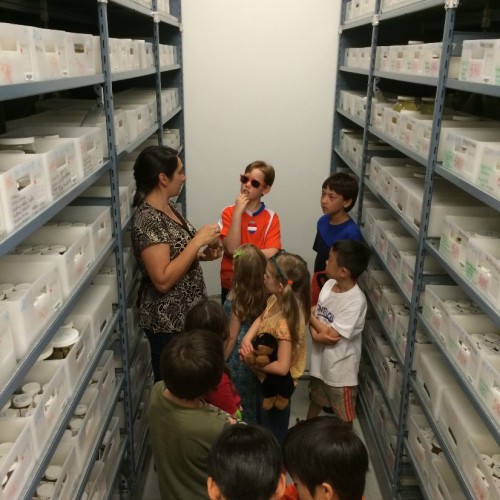 Checking out some of the amazing specimens 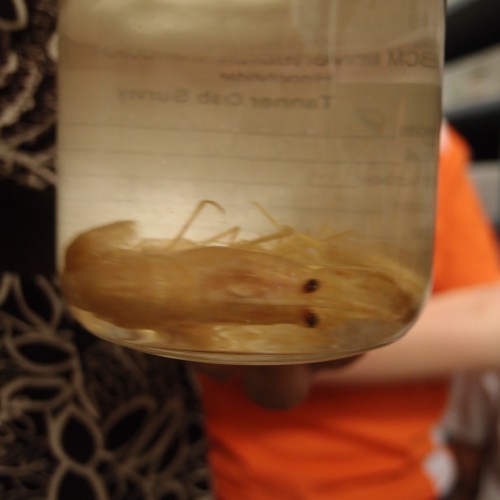 One kid asked to see the cutest shrimp in the collection, and so Heidi pulled out these adorable little guys! 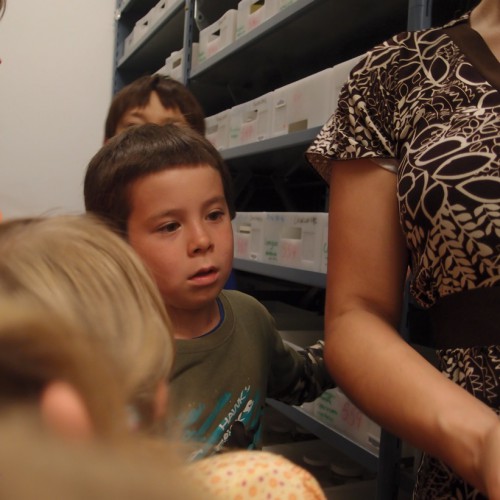 What the heck is that, Heidi?! 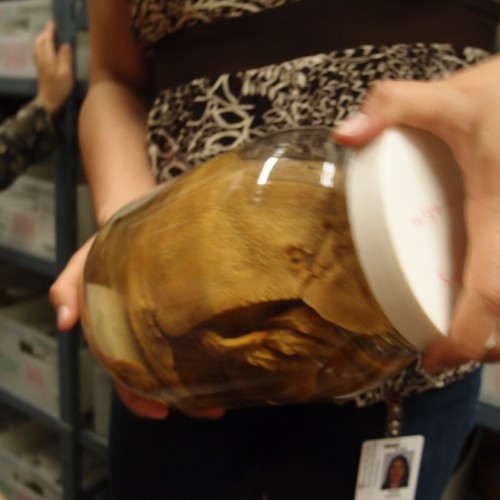 Chris warned us at the beginning of the tour that the stinkiest place in the whole museum can be found in the Invertebrates Collection, so we were curious about what that might be.  After getting a good look at some of the amazing jarred specimens, it was time to see the bigger species that are too big to fit in jars.  The only downside is…it can be pretty stinky! 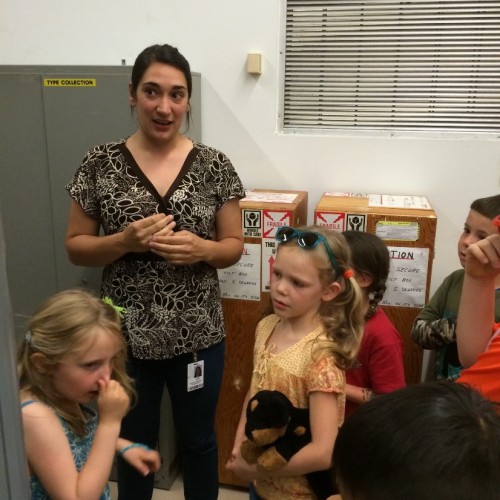 Getting ready to see the stinkiest part of the RBCM! Plug your nose!

In order to preserve the bigger specimens, Heidi still has to keep them soaked in alcohol, but that means BIG vats of it!  The mix of the strong chemical smell and the natural oils released from the specimen can make a pretty potent odour.  Kids Club got prepared to take the smell because we were so excited to see what was within these vats – and was it ever worth it! 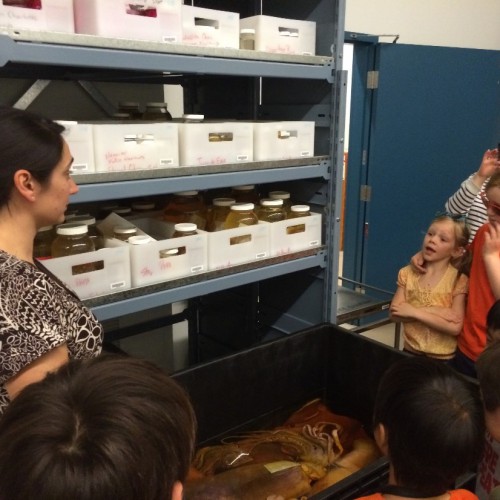 In the first vat we got to see some enormous Humboldt Squid.  They are particularly interesting and important specimens because they are not native to B.C. waters.  But unlike the European Green Crab which is an invasive species that was brought over to B.C. by humans, the Humboldt Squid have been bringing themselves up north to our waters from around Mexico for the last 10-15 years. We tried to think of some reasons they would be moving up here (other than the fact that B.C. is so awesome!), such as pollution, following their prey, or because the water is getting warmer.  Heidi said that having these specimen, and knowing when the Humboldt Squid first started coming north can help other scientists, now and in the future, to determine how climate change is affecting our oceans and its species. 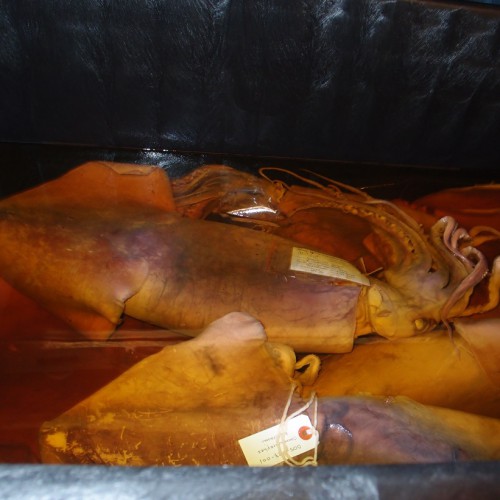 Movin’ on up! The Humboldt Squid have been travelling up from Mexico to B.C. waters for the last 10-15 years. Next time you’re in the Natural History gallery, see if you can spy another Humboldt Squid in one of the display cases!

The next vat we got to see smelled a bit more strongly, so we all had to plug our noses – except for Heidi because she’s used to it by now (even though these next specimens were vertebrates, not invertebrates)!  She must have a nose of steel! In this vat we got to see an enormous sculpin (I’m not sure I’d want to catch one of those!), and a Six-gill shark which was huge!  We even helped count all the gills, just to make sure they had identified it correctly! 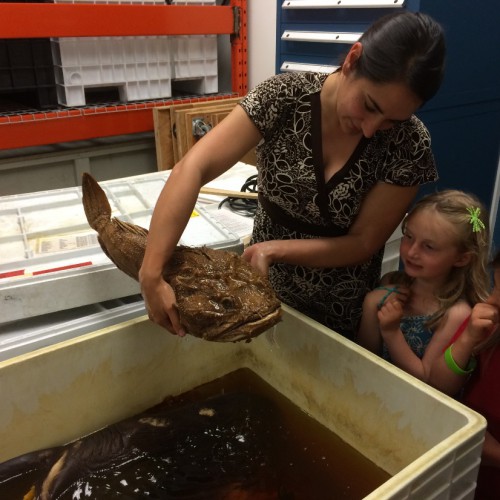 Stinky vat #2 was a bit more pungent- but what amazing creatures it held! This is the Big Mouth Sculpin! A giant version of the ones that you can find yourself on the average tidepool. 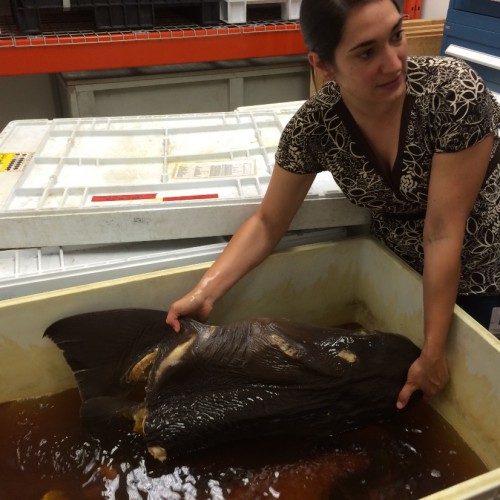 This is a Six Gill Shark…can you guess how it got its name?

A HUGE thank you to Heidi for all her time and effort in giving us such an awesome look into the life of an Invertebrate Collection Manager and sharing such intriguing specimens with us!