Formula 1 designers have developed curvaceous cars with wings and finlets to control airflow and increased down-force to help the car grip the track when cornering. Here in BC we have fishes with similar adaptations to maximise hydrodynamic efficiency in fast water, or at fast cruising speeds, and some have amazing traction and can hold onto rocks and “sea weed” even when waves pound the intertidal zone.

In freshwater, we have my favourite minnow – the Longnose Dace (Rhinichthys cataractae)  – which as its Latin name suggests, lives in rapids and riffles. Longnose Dace have a streamlined body and an arched back, a long nose (no surprise given the name) and fairly thick, broad pectoral fins for a fish of this size. They always reminded me of an F1 car – but they are not quite as colourful, nowhere near as loud, and are cheaper to maintain.

A Longnose Dace from the Similkameen River and a Formula GT car from my favourite video game – perhaps the comparison is tenuous but it is always fun to find commonalities between hobbies and work.

The dace’s pectoral fins probably act like wings on a Formula 1 car to create downforce to hold the fish in place in fast currents. But I suspect these fins do more than simply sticking a fish to the substrate. I once set up a fish tank which had a one-way flow around a central, elongate “island” of rocks. The water was shallow and whipped around the tank thanks to a battery of pumps all aimed in the same direction. It wasn’t the usual sort of thing you’d expect for a fish tank – but it was really fun to watch as fishes worked their way from rock to rock, darted up to grab food, and then back to the bottom to hold position in the strong current.

Fishes segregated in the tank based on their swimming ability – typical minnows – like Sand Shiners (Notropis stramineus) occupied deeper areas where the water was slowest. The Longnose Dace occupied the fastest water – but didn’t seem to be using their tails for propulsion like the other species. It made me wonder if their pectoral fins had a dual function to generate lift to pull a fish forward (like a sailboat tacking against wind and tide), and to create downforce as required to keep the fish near the bottom. The fin rays may be flexed to change fin shape as necessary. Most of the time, Longnose Dace live behind rocks or even in the spaces between rocks, so they are not subject to the full force of a river or stream, but they certainly seem to glide effortlessly when in strong currents. Perhaps they are just being creative in their use of turbulence in the stream – but I don’t think anyone has ever done a study of fluid flow over the fins of Longnose Dace, but I bet they generate a fair bit of lift. Perhaps there is a fluid mechanics thesis here. To be honest, we still have a lot to learn about this species in BC. It is found in the Columbia, Fraser, and Mackenzie River drainages, yet most people have no idea it is here, even though they can reach 12 cm and are very common.

Bird wings are similarly dynamic where the camber, angle of attack, and the surface area can be changed. Birds even have a layer of feathers on the back of the wing that passively lift to regulate turbulence as they land (breaking flaps seem to lift the same way on airplane wings just prior to landing). 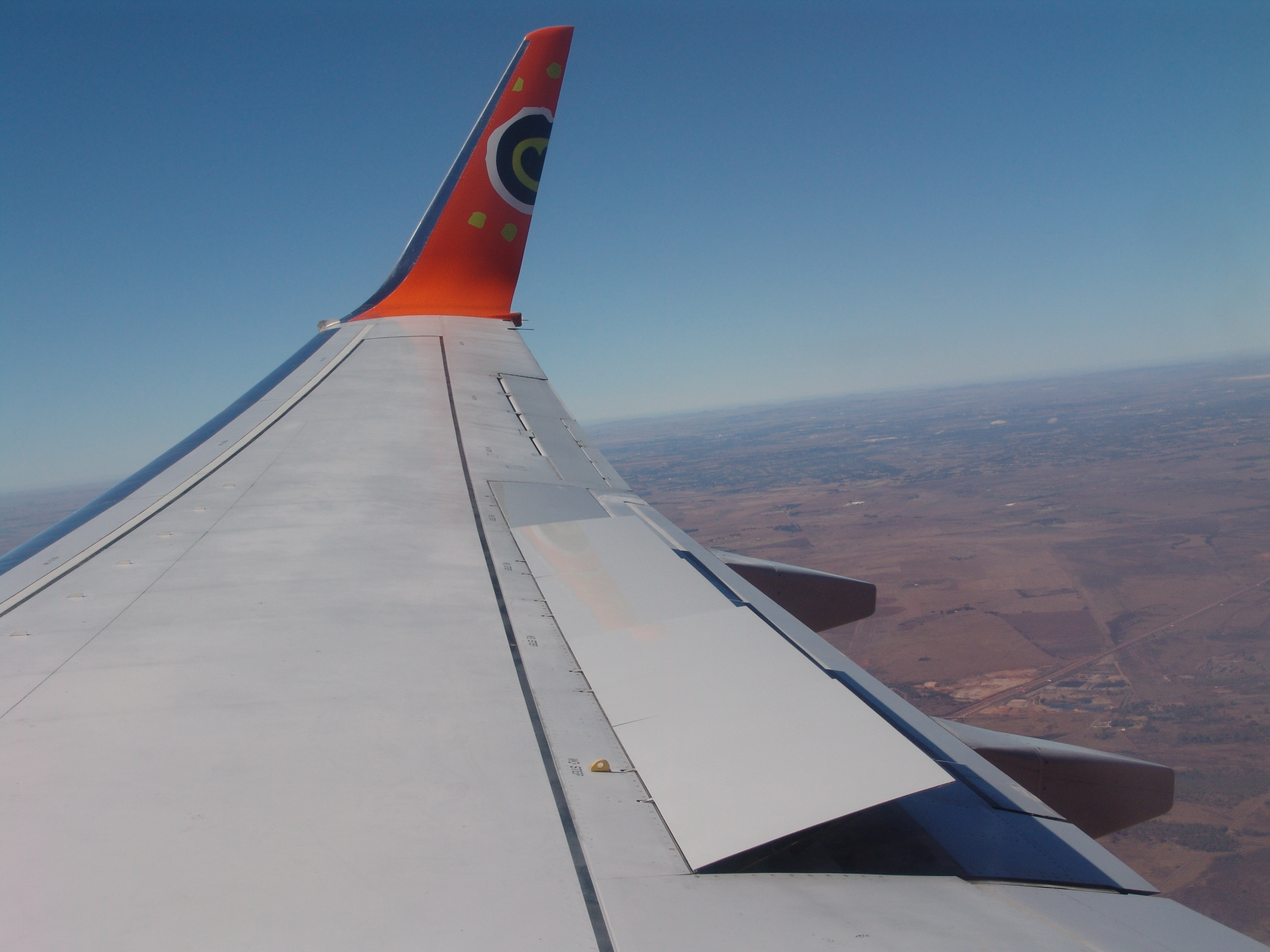 Our other fishes which show amazing levels of hydrodynamic efficiency include tuna and mackerel (Scombridae), jacks (Carangidae), and of course the lamnid Sharks. Tuna and mackerel have dorsal and anal fins that retract into slots to reduce drag. Their pectoral fins retract into a shallow depression to reduce drag, and even the eyes have a fatty eyelid to smooth the body profile. The base of the tail is flattened with fine keels to allow efficient passage through the water, and there is a paired set of finlets on the top and bottom of the tail base to help control water flow (PDF ). In freshwater, the Ninespine Stickleback (Pungitius2) also has an extreme caudal keel to allow the tail to oscillate with minimal drag from the caudal peduncle depth.

A Mackerel with its high-aspect-ratio tail and finlets (http://commons.wikimedia.org/wiki/File:Scomber_scombrus.jpg).

Lamnid sharks also are marvels of hydrodynamics – our local examples are the Salmon Shark (Lamna ditropis), the Shortfin Mako (Isurus oxyrinchus), and the Great White Shark (Carcharodon carcharias) [which is the subject of the present IMAX film]. Each placoid scale has fine ridges that helps control fluid flow over the body (PDF), the body is the perfect shape – a spindle – for moving through the water, and like tuna and mackerel, the tail base is depressed to slice through the water. Lamnids also have a small second dorsal fin and anal fin that help smooth fluid flow over the tail base. Submariners can only dream of such efficiency. 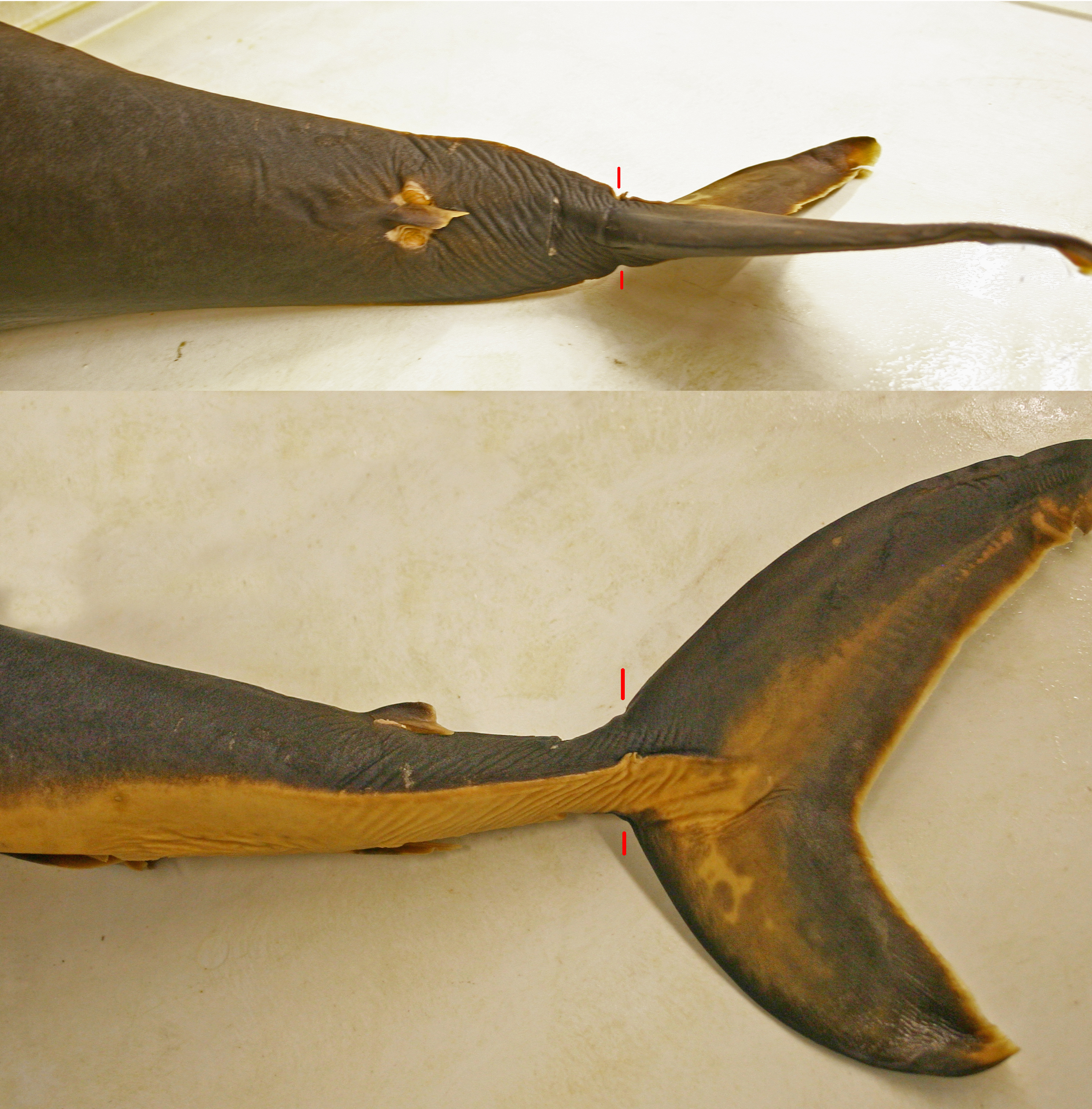 The caudal peduncle of a Salmon Shark (RBCM 995-00146-001) in dorso-ventral view and lateral view; red dashes indicate where the specimen label pinched the tail.

By comparison, the other methods fish use to deal with fast water are quite simple, even if anatomically ingenious. Instead of swimming against fast water, Snailfishes (Liparidae), Clingfishes (Gobiesocidae), and the Pacific Spiny Lumpsucker (Eumicrotremus orbis) hold position using a their pelvic girdle which is formed into a suction cup. Like museum staff working with display case glass, this suction cup is their lifeline to success. While the anatomical modification of the pelvic girdle is extensive (and freakishly cool), it is a simple way to hold position in a current (i.e., keep calm and hang on). I can see a T-shirt in the making… 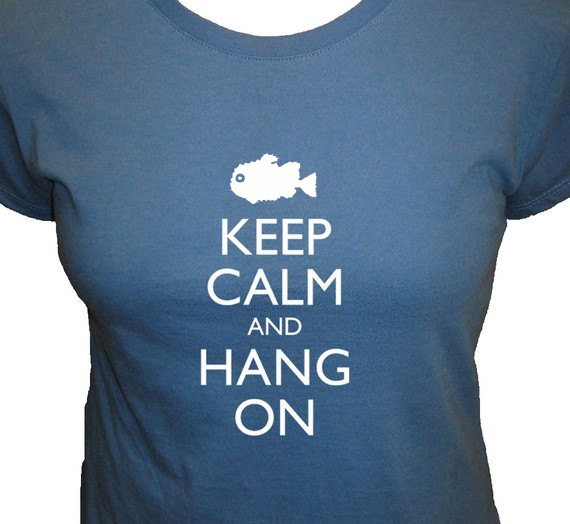 In contrast, the fins of a Longnose Dace are hardly different from those of other minnows, but work exceptionally well in fast water. 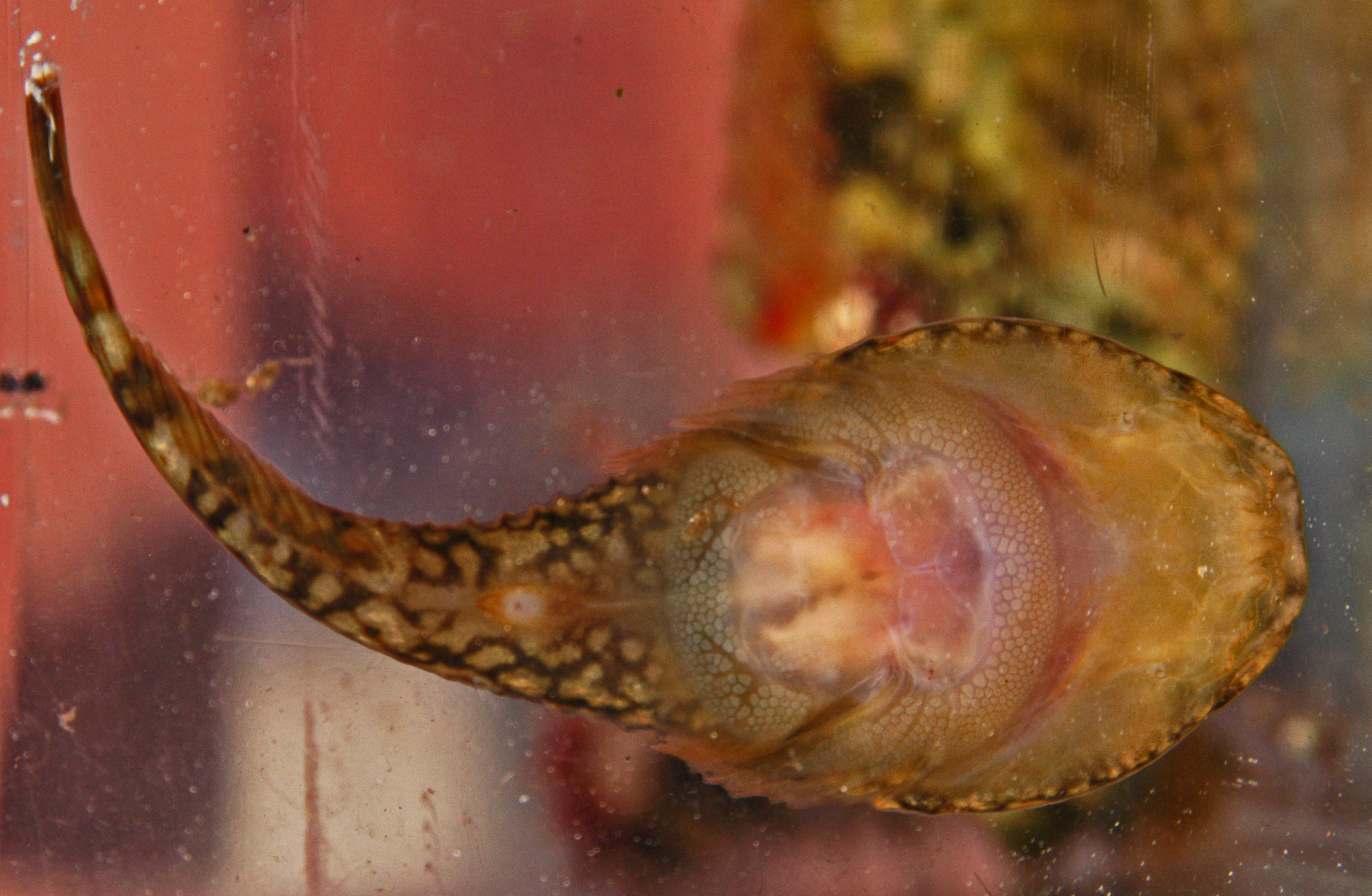 A northern Clingfish in side view (top), and its underside showing the pelvic sucker (bottom). 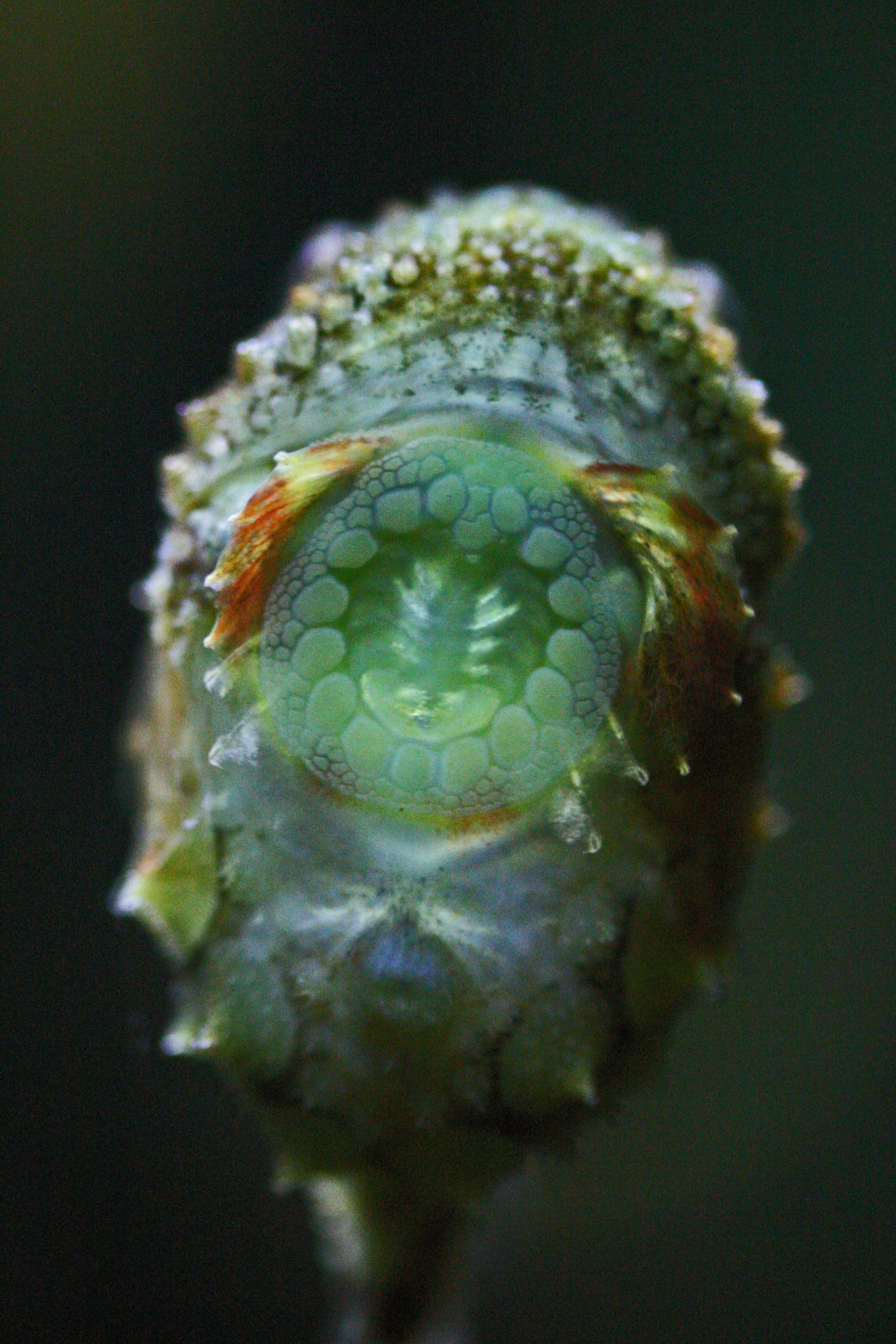 As a complete side-note, we have a pair of Tailed Frog species in British Columbia with tadpoles that use their mouth to suck onto rocks to hold position in fast water – as do our freshwater jawless fishes – the lampreys (their family name literally means: rock sucker). It is just a different way to achieve the same result. “To each their own”, as my Dad says. 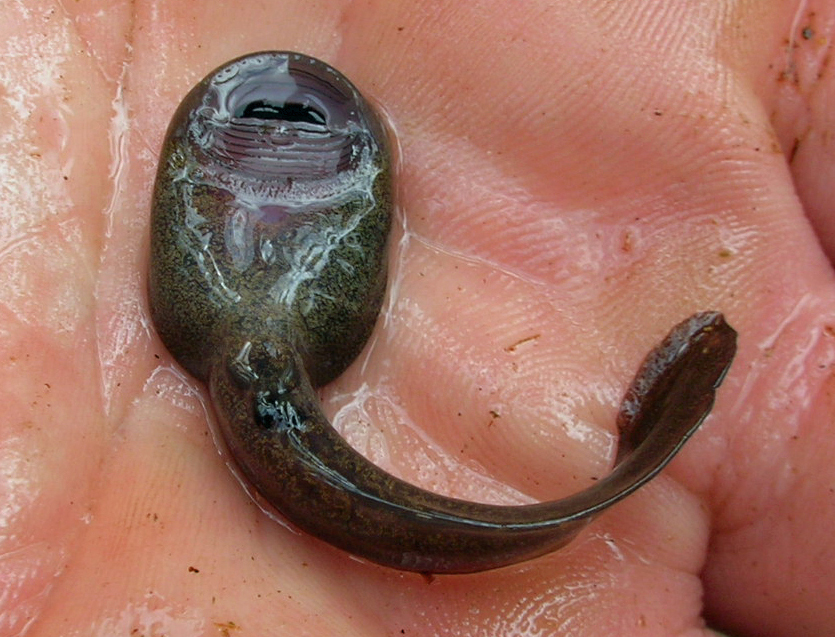 All these adaptations evolved independently – but for the same reason – hydrodynamic pressure. Some species hang on when fast water whips by, others seem to glide against the current, and the most efficient, swim fast through water and need exceptional streamlining. Nature is fantastic.

Next time you look at a fish, have a close look at its fins and body shape. Is it built for speed? Do the fins and body look like they inspired engineers to build an F-1 racing car? You can tell a lot about an animal’s lifestyle just from basic anatomy.