The Bridges of James Bay 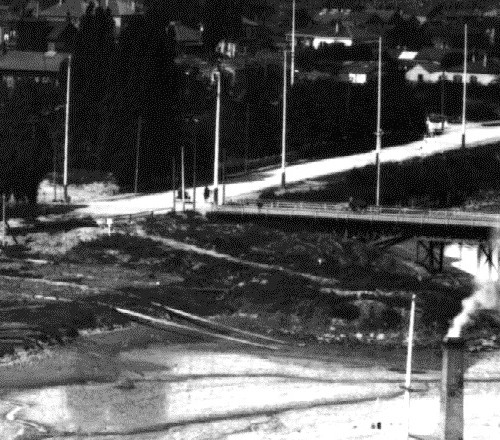 As Victoria expanded south from the Fort where Bastion Square is now, the decision was made to build government buildings south of James Bay. In order to connect this area to the rest of Victoria, a bridge across James Bay was required.

Over time, three such bridges were constructed.

Each one of these bridges was anchored in some way by a rock that extended out into James Bay on the south side.

This next picture is described as being a picture of the second bridge but appears to be the first one. As a matter of fact, this picture may be a copy of a different print from the same photograph. Have a good look here and here …. (A common problem in archival work.)

The following picture shows the north end of the first bridge with Seeley’s Hotel on the South East corner of Humboldt and Government Streets. This is the present location of the Gardens leading to the new entrance to the Empress Hotel.

Although information in the city directories are rather sparse, the 1882 British Columbia Directory (Page 71) lists a James Seeley boat builder and a WCS Seeley proprietor of the Australian Hotel residing at that address. The location must have been rather profitable for that family. 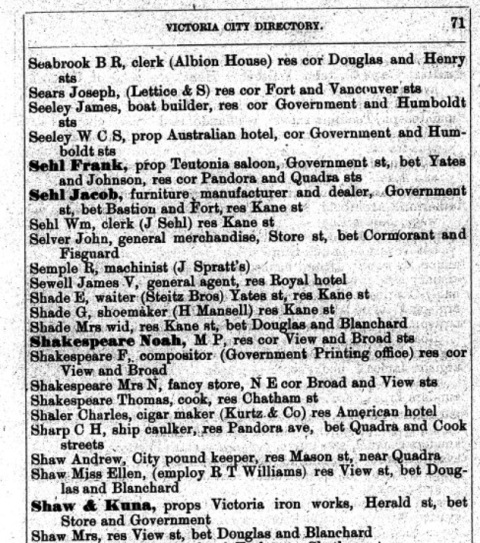 This is a photograph of the second bridge which appears to have been built during the 1870’s.

Notice how the substructure of the bridge is much more enforced than the first bridge.

The following picture shows the second bridge and the home David Spencer occupied before he moved to his home in the Rockland neighbourhood in 1903.

This is a more detailed picture of the home taken from the same image. 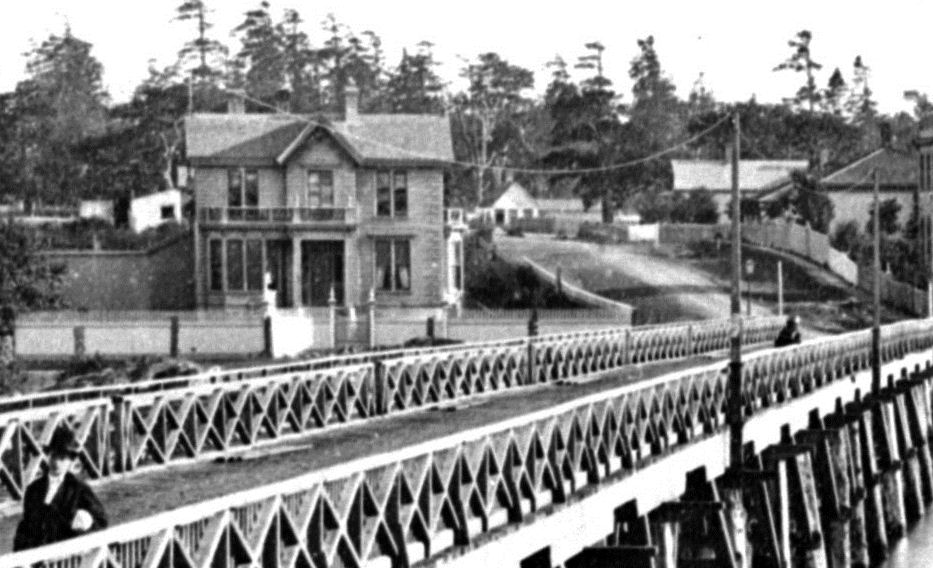 The third bridge was built in the prior to 1891 and was strong enough to carry the weight of the burgeoning street car network which was serving the citizens of Victoria at that time.

In this photograph you can see the line that crossed the bridge,  and then went down Bird Cage Walk, Superior Street, and St. Lawrence Street before terminating at the Victoria Chemical Company and Brackman & Ker Milling Company properties at the end of Erie Street.

Notice that the bridge is much wider to accomodate the street car line and how the substructure of the bridge has arches to handle the additional weight of the vehicle traffic.

In this picture, the bridge was decorated for the funeral of Queen Victoria.

The following picture shows the boat house for the James Bay Athletic Association at the North West end of the Bridge near where the present day Tourist information Bureau is located.

If you can locate photographs of any one of the three bridges or have information on when the bridges were built, I would be most grateful. If the picture is posted to an online photosharing service, I’ll be happy to post the link!